You either love her or you hate her, but either way you have to admit that the American Jewish comedienne says everything that’s on her mind, no matter how vulgar or repulsive it might be.

My evening with Sarah Silverman – it almost sounds like a date. But this was a date I didn’t even know was listed on the calendar when my wife sent me an email in the late afternoon. “Did you know that Sarah Silverman is receiving an award at the Jerusalem Cinematheque this evening?” What was the likelihood of getting tickets at the last moment? Amazingly, there were two seats left in the tenth row. On the spur of the moment, I made the purchase.

The occasion was a screening of “Sarah Silverman: We Are Miracles”, her debut comedy special for HBO. The film, a stand-up routine Sarah performed before an intimate audience of 39 people at L.A.’s Largo nightclub, won her the 2014 Primetime Emmy Award for Outstanding Writing for a Variety Special. The film was shown as part of the Jewish Film Festival taking place in Jerusalem. Before the screening, Sarah received an achievement award in recognition of her work in entertainment. 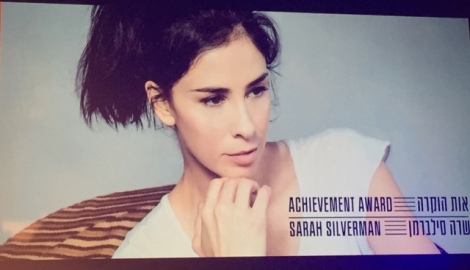 Silverman, visiting Israel for the second time, had also come to attend the bar mitzvah of her nephew. Her sister Susan Silverman is a Jerusalem-based Reform rabbi and a member of Women of the Wall. Sarah joined the Women of the Wall for a Hannukah menorah lighting at the Western Wall, an event which luckily did not result in violent protests against the religious rites practiced openly by the Jewish feminists.

“All the men were over on one side, and all the women were squeezed into a small area on the other side,” Sarah said about the experience.

In both the film and an interview session led by veteran Israeli comedienne Einav Galili, Sarah said her upbringing was not particularly Jewish, but rather Jewsy. “Judaism came out of our pores,” she said. 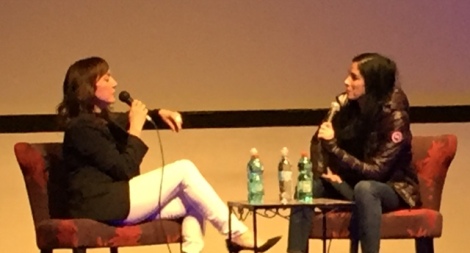 When Sarah visited Israel three years ago, she performed in Tel Aviv and much of that material made its way into the film. My wife and I had previously seen “We Are Miracles” when it was shown in Israel on YES satellite’s Docu Channel. This time we were sitting three rows behind the comedienne as the film was screened. Our evening with Sarah Silverman was an unexpected Hanukkah treat.