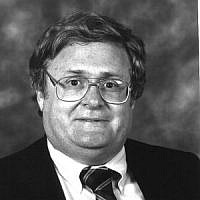 The Blogs
Harold Brackman
Apply for a Blog
Please note that the posts on The Blogs are contributed by third parties. The opinions, facts and any media content in them are presented solely by the authors, and neither The Times of Israel nor its partners assume any responsibility for them. Please contact us in case of abuse. In case of abuse,
Report this post.

As an American Jew, one might think I grew up a Jewish “family history” buff. Yet—like many American Jewish historians of my “post-greatest” generation—I came of age more interested in African American and even African history. Why is another story.

My recent belated search into my own family history was catalyzed by a connection that exploded in my memory as I saw on the streets of Charlottesville white racist anti-Semites, chanting “the Jews won’t replace us,” arrayed against anti-fascist marchers, including a few violent Antifa activists. My recollection was of my maternal uncle, Jake “Mohawk” Skuratofsky, a kind but tough bookmaker who died in 1988. Jake Skuratofsky fought German American Bundists on the pre-World War II streets of Newark (which Philip Roth’s novels has made mythical), and New York’s Yorkville.

This is where he was nicknamed “Mohawk”—after the Nazis broke his bulbous nose that became bigger like a stereotypical Indian chief’s! His fiercely antifascist wife, my aunt, might as well have been named “Auntie Fa.”

My mother, Ruth Brackman, was a committed FDR-Truman-JFK-Humphrey Democrat who overcame so many family tragedies to nurse back to a semblance of health, her husband, Alex, my stricken father, who never recovered from four years’ service years in the South Pacific. Middle-aged and overweight, she then achieved meteoric success in San Fernando Valley real estate. My mother was Jake Mohawk’s sister. They were two of eight children (some died in childbirth) born to Brona Leah and Harry Skuratofsky, a Newark butter-and-egg man whom my teenage mother nursed during his deathbed struggle with colon cancer.

I have now learned that my maternal Grandpa Harry was born in 1882 in Chudnov in today’s Ukraine—but before that in the USSR, Czarist Russia, and the Polish Empire. His Tevya-like family owned an inn; he traded with Ukrainian villagers. He also served in the Russian Army.

Grandpa Harry first immigrated to North America in 1909. Attempting to enter New York, he, for reasons unknown, was deemed a “LPC,” “Likely Public Charge,” and turned back.

Grandpa Harry later successfully immigrated with his wife and two children in 1913 to Ontario. There, he traded textiles with Indians. Which tribes, I would like to know! The struggling family relocated to Toronto.

My mother was born there in 1917. The family, as part of a chain migration, settled in 1923 in Newark where Grandpa Harry owned a a butter-and-egg, farm-to-city business until a fire destroyed everything.

Harry Skuratofsky was a proud Jew. He donated a Torah to the Synagogue, and kept the Commandments. His rule to his children was “you can speak English anywhere, at home you speak Yiddish.”

Grandpa Harry’s birthplace of Chudnov for me as a Jew has an evocative history. In 1660’s Battle of Chudnov on the one side were the Russians with their Cossack allies—including Yuriy Khmelnytsky (the Ruthenian name; the Poles and Jews called him Chmielnicki), the son of the famous or infamous Ukrainian-Cossack “hetman,” Bogan Khmelnytsky. Bogan Khmelnytsky is responsible, so far as Jewish historians are concerned, for the Pogrom of 1648-1649 during which some 30,000 Jews— more than half Ukraine’s Jews—were slaughtered by Cossacks. (The modern word “pogrom” grew out of later Jewish massacres in Ukraine). On the other side of battles lines were the Poles and their Muslim Tatar allies.

After two centuries of turbulent history, my Grandpa Harry was among the Jews who fled Ukraine, arriving on North American shores penniless with a dream of a safe haven. During the Russian Revolution and Civil War, another estimated 30,000-100,000 Jews were killed. Then during the World War II’s German occupation, one million Jews were shot by Einsatzgruppen killing squads and Ukrainian collaborators. Jewish life in Ukraine was far from an unrelieved chronicle of sorrow, but Khmelnytsky’s Massacre of 1648-1649 and the Babi Yar Massacre of 1941 were tragic bookends of the Ukrainian Jewish experience.

In 1660, the Poles and Tatars won, partly because of the treachery of the Cossack Yuriy Khmelnytsky who did not prove a reliable Czarist ally. The Battle of Chudnov was the greatest Polish victory over Russian arms until 1920. I like to think of a line of martial valor from Jews defending themselves in 1648-1649 and 1660 in and around Polish-Lithuanian and now Ukrainian Chudnov, to my Grandpa Harry Skuratofsky’s service in the Russian Army, to my Uncle Jake “Mohawk” Skuratofsky’s aggressive defensive of American Jewish neighborhoods against German American Bundists, pre-Pearl Harbor.

Until graduate school, I was most influenced by my impressionable viewing of Hollywood’s romantic WWII image of the anti-fascist cause in “Watch on the Rhine” and “Casablanca.” Yet now I think my family history also matters. It is part of the reason that I, like most Jews, am viscerally “antifascist.” This even though, as an historian, I well understand that Stalin was a monster and that Mussolini (with his influential Jewish mistress) was no Hitler. I also like to think that my family history partly explains why I became a consultant against anti-Semitism and racism for the Simon Wiesenthal Center and its Museum of Tolerance 30 years ago.

Yet I am also an “anti-Antifa” today because of the black-clad and -masked thugs in the streets of Berkeley who have been disgracing the name and cause of “antifascism.”

About the Author
Born in the shadow of the old Yankee Stadium, I grew up in Los Angeles where I did my undergraduate and graduate work at UCLA. I spent 10 years teaching at American universities before joining the Wiesenthal Center. I've published widely, both in journalism and in scholarship. My new book, coauthored with Ephraim Isaac, "From Abraham to Obama: A History of Jews, Africans, and African Americans," will be published next month by Africa World Press.
Comments
Advertisement