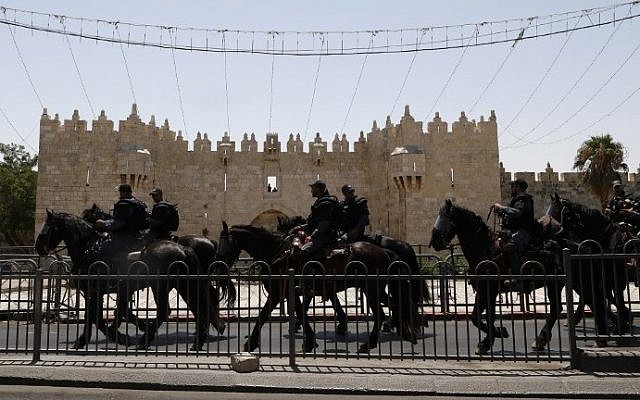 One of my favorite streets in the Old City has two names:

It runs north and south and back again.

It’s the street that leads you from Damascus Gate to the Western Wall, the holiest site where Jews are allowed to pray.

It’s also the street where a quick turn and step or two takes you down a little road to one of the Aqsa gates — one of Islam’s holy sites, and a spiritual and political flashpoint between Jews and Muslims.

The Cardo ran underneath back in the day.

The street smells like coffee and ripe strawberries, and saffron. You can buy bags of pink and blue almonds, and Christmas lights during Ramadan, to illuminate the night. There’s a guy who runs a money changing station — his voice box was removed a few years ago, but he’ll press on his windpipe and sing something by Fairuz.

There’s also a Yeshiva, heavily guarded by guys in pants and black shirts with black yarmulkes on their heads, and black guns on their hips. The kids are escorted to and from the Western Wall by at least one armed guard — sometimes more depending on how many kids and what’s happening in the news cycle. The mothers push pink strollers quickly from the front, they don’t stop even if their baby is crying, they keep walking fast, their eyes moving left and right until they reach the Jewish Quarter. And then they stop and breathe. And have a coffee for six shekels at Cofix.

Late at night, you can hear the guys in the Yeshiva singing.

During the day, you can hear Palestinian hiphop or Oum Kalthoum.

Five times a day you can hear the call to prayer.

On Friday afternoons, the Shabbat siren.

There are these old women from the villages outside Jerusalem who bring figs during late summer, artichokes in winter, and they sit on the street on woven rugs and they sell their reapings. They look old but they probably aren’t.

Then there are the dudes who sit around and play backgammon, their bodies smushed into metal chairs, they are the masters of their own fate, the kings of the street. Until their wives call them home.

There are a lot of kids — Jewish, Arab — they’re the same ages, and they play the same games, but I’ve never seen them play together.

And then are the Border Police who are stationed at the major intersections — they mostly point their guns down, until they don’t. I’ve seen them buy coffee from the old guy who sells juice and popsicles and other drinks one day, and then interrogate and frisk his son the next.

This is the street where there’s an indentation in one of the walls that some believe was left by Jesus Himself when he stumbled and almost fell on his way to being crucified. Although maybe the indentation is merely because so many thousands — maybe millions — believe that THAT was the spot, and so day by day, year by year, we’ve helped make that indentation by placing our own faithful hands against stone.

But the part that makes me reel, the part that is hardest to understand and brings knees in humble supplication, is the intersection between this street — Al Wad/Haggai and Via Dolorosa. Especially on Friday afternoons when the sun softens the stones, and makes it shine like sea shells or skin.

It’s where you see it all — the Christian pilgrims schlepping the cross up from Lions Gate — wafting past the shops, stopping at each station, singing, praying, sorrow by sorrow on their way to the Church of the Holy Sepulchre.

It’s where you see the Muslim guys heading toward Aqsa with their prayer rugs, young women in hijab, and moms pushing babies, buying candies, or going to pray.

It’s where you see the Yeshiva boys heading to the Western Wall for Shabbat, and whole families — beautiful families, with six or seven kids, all dressed in their finest, their faces scrubbed and their hair shining, going to pray, too — or maybe going for a meal, or just walking together during the holiest time in the holiest place.

But it’s also around the corner from where my friend Shadi got the shit beaten out of him by Border Police because his papers had expired the week before. Where a soldier kicked him in the head, where my friend looked up and saw that soldier was crying.

It’s where Shadi asked the soldier “Why are you crying?” as pain exploded across his face.

And it’s where the soldier answered “Why did you have to come here? Look what we are doing to you.”

And this place is also around the corner from the spot where two Jewish fathers were stabbed to death by a terrorist, where they bled out on the stone street, where their injured and screaming and terrified wives were kicked and spit on by the shopkeepers.

But it’s also the street where I carried a kitten rescued by Palestinians in the Muslim Quarter to a woman in the Jewish Quarter who is caring for it to this day, and it’s the street where the Border Police, and the Yeshiva kids, and the Palestinian merchants, and even a random priest have asked me separately and on different days “how’s the kitten?”

And it’s the street that I walk the most because if you expect to find a miracle in Jerusalem, you have to start looking in a place like this where all roads — beautiful and terrible — meet

About the Author
Sarah Tuttle-Singer, Times of Israel's New Media editor, lives in Israel with her two kids in a village next to rolling fields. Sarah likes taking pictures, climbing roofs, and talking to strangers. She is the author of the book Jerusalem Drawn and Quartered. Sarah is a work in progress.
Related Topics
Related Posts
Comments