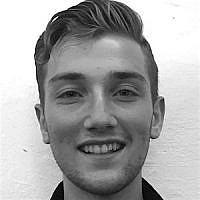 The Blogs
Yakir Zwebner
Apply for a Blog
Advertisement
Please note that the posts on The Blogs are contributed by third parties. The opinions, facts and any media content in them are presented solely by the authors, and neither The Times of Israel nor its partners assume any responsibility for them. Please contact us in case of abuse. In case of abuse,
Report this post.

Red boots, temperate bright eyes. I looked upon my childhood friend and everything seemed at once all together different and yet, at the same time, exactly the same. The last time I saw him we were laughing about some dumb joke I had made, now, there was an air of seriousness and formality. The image of the young scrawny boy I once knew was all but gone. A broad, strapping young figure, in a crisp, new, olive green uniform and beret, with a haircut and contacts to match, stood in front of me, in his place. The only remnants of my old friend that could be seen were those kind blue eyes and genuine smile.

This piece is not about the great hardships we have endured here in Israel. I am sick of seeing blog post after blog post, Op-Ed after Op-Ed, detailing the scene of a tragedy or purporting some sort of feeble solution or foreseeable conclusion to this conflict. Rather, this piece is dedicated to all the soldiers, police, and government employees who risk their lives everyday, in the greatest display of courage and bravery I have ever seen, to defend our great country, to defend what we hold dear. This piece is dedicated to all those friends who didn’t go to college or to study at yeshiva, to the true heroes of our day, whom, at the age of 18, swore with fervor and zeal to do anything in their power to ensure the continuity of the Jewish state and protect it. These men and women are not just part of any old army, they are part of God’s army, doing God’s work, on a divine mission. This piece is about bravery and glory. This piece is about the truest source of inspiration; our soldiers.

Our soldiers are constantly and consistently scrutinized in the media. The newspapers are abound with stories detailing the occupying Israeli Army’s many abuses of basic human rights. I can usually handle the ridiculous media bias towards Israel, but this is simply too much. It disgusts me to see headline after headline portraying the most recent terror attack in the most blatantly ANTI-SEMITIC way possible, with the comically discreditable news agency seeking to in some way insinuate it was the Israeli side who really committed the attack, striving to assert that it was the victim’s fault for getting stabbed, for having a perfectly good kitchen knife or meat cleaver wasted. Heck, some of these news agencies would even try to assert that the stabbing victims truly stabbed themselves and security merely seized on the opportunity to arrest some Palestinians as collateral.

To be frank, I absolutely hate the liberal headlines that all too often feature Israeli solider brutality as a top story. To be fair, I do not doubt for a second that there are indeed soldiers in the Israeli army that abuse their positions of power. In fact, I have even witnessed several of these instances myself throughout my travels in Israel. Such is an unfortunate reality of all governing bodies and institutions of power throughout the world. However, the allegations alleged against Israeli soldiers on a near daily basis are ludicrous. The egregious and inhumane crimes that Israeli soldiers are constantly condemned for are baseless and offensive. Not only does the Israeli army as an institution go out of its way to warn civilians of possible impending danger and threats through the use of advanced technologies such as SMS Messaging, “Knock on the Roof” warning missiles, and pamphlet droppings, but it also goes out of its way to treat wounded terrorists and their families in Israeli hospitals.

However, the point of this post is not to convince you of the moral and outstanding nature of the Israeli army and/or the way it conducts its affairs. Rather, it is to explicate the very real and human side of Israeli soldiers; mere teenagers, no older than myself, who look forward to playing ball with their siblings or having a beer with some friends, just like any other ordinary kid their age. It is to make known that my friend is not a monster as portrayed in the media. He is a sweet and caring young man who volunteers every Sunday to be a friend and mentor at a special needs organization.

My friend who would spend his free time doodling pictures of the loony tunes and listen to Simon and Garfunkel on repeat; my friend who’s only experience with altercation was when he’d fight with his sister over the T.V. remote; my friend, who’s sensitivity was the only thing that shined brighter than the smiles he would bring to everyone else’s faces, is now being portrayed as a merciless occupier, a barbaric oppressor. Honestly, the entire notion is quite unbelievable to me. It is absurd to think that my friend, who grew up in a home that would not allow for war centric video games like Call of Duty to be played in the house on principle of not wanting to diminish and/or desensitize their children to the value of life, is suddenly abusing Palestinians. My friend who’s dreamed of joining the Israeli army since he was 7 years old with his sole motivation being the desire to safeguard his loved ones and the country he holds dear, is now seeking blood? Has he been brainwashed to value brutality and murder? I can assure you that there were no obvious signs of mental manipulation when I saw him. Nothing upsets me more than these unfounded, abhorrent claims. My friend is on the front lines. My friend is the first line of defense; the first one on the scene. My friend is out there putting his life on the line while I sit in yeshiva; so I can sit in yeshiva. My friend is good. My friend is kind.

With all the constant attacks we are lost. The other day there was an attack in which two people were killed at Shaar Yaffo. If the death of Ezra Schwartz hit close to home, this was practically at my door step. The past months have proven there truly is no escaping this horrible terror. Unless you strive to look past it. I choose not to harp on the malicious acts of hatred that you can read about in the daily headlines, but rather on the altruistic and all sacrificing soldiers who allow us to go on with our daily lives, who allow us to continue living the dream of a Jewish return to our homeland after 2000 years for such is the ultimate counter attack. To persevere and live on, aspire toward further greatness, to take the great pain and suffering we feel with every loss and exalt it. To use it to only make us stronger, more resolute. I will continue to run out of Shaar Yaffo everyday. No terrorist will stop me from running. They won’t disrupt my daily life. I will pass through that gate and kiss the mezuzot encased in historic shrapnel and remind myself and those around me of the great sacrifices of those who fell before us to enable us to erect/establish this great country and those who rise proudly everyday to ensure its continuity.

Growing up we were reckless, we often got ourselves into all sorts of good-natured trouble. We’d come home after a day full of mischief and our mothers would have this concerned look on their faces. They were truly worried sick about us when we came home 20 minutes passed curfew. And now, his mom doesn’t know if he is going to come home. Every time the phone rings displaying an unidentified Israel number her heart skips a beat. Every time she reads about soldiers being injured in another terror attack she waits in angst and anticipation for her son to call and reassure her that he is alive and well. But for me, seeing my friend in his new uniform was different. I wasn’t scared for him. I was proud of him. He didn’t carry the burden of protecting the nucleus/focal point of the most volatile region in the world, rather he carried his divine mission with great confidence and pride, dawning it outwardly for everyone to see. This isn’t about 18 year old kids risking their lives. This isn’t about Israel sacrificing my childhood friend. This is about some of the most special people I know becoming all of our guardian angels, dressed in army fatigues. These young adults are transformed into the paradigm of courage and might. This isn’t a task, this a right of passage. This is the future. I tip my cap in salute to all the soldiers who proudly serve us everyday. Thank you!

About the Author
Yakir Zwebner is a 19 year old student at Yeshivat Orayta located in the ancient city of Jerusalem. Yakir, a recent graduate of The Frisch School in Paramus, N.J. plans to study medicine at The University of Chicago next year. Yakir, though only recently accustomed to writing in a non formal setting, has quickly fostered a love for recreational writing. Yakir strives to synthesize his unique experiences with his new found love of language to be able to convey to others his many thoughts and reflections as he embarks on a one of a kind journey in a foreign land.
Comments