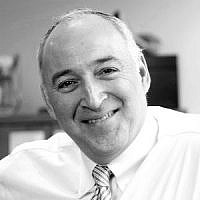 The Blogs
Mark Cooper
Apply for a Blog
Please note that the posts on The Blogs are contributed by third parties. The opinions, facts and any media content in them are presented solely by the authors, and neither The Times of Israel nor its partners assume any responsibility for them. Please contact us in case of abuse. In case of abuse,
Report this post.

Recently I experienced what may be the most deeply spiritual moment of my life—my first grandson’s bris.  The ceremony, held in my son and daughter-in-law’s synagogue in Riverdale, New York, emphasized for me the profound and enduring importance and meaning of Brit Milah, the ceremony of welcoming a baby boy into the family of the Jewish people with prayers and the ritual of circumcision.   That this bris was so spiritually meaningful may not seem unusual, except for three things:  I am a congregational rabbi in the 31st year of my career and thus no stranger to Jewish life cycle events, I have been a Mohel with an active practice for nearly 24 years during which I have performed thousands of circumcisions, and I am the father of five sons, each of whom was welcomed with a bris.  For those who may be wondering, I did perform circumcision for my sons (the three younger ones, as I wasn’t yet a Mohel when the first two were born).  Unlike a surgeon in an operating room, a father has a Jewish legal obligation to circumcise his own son, though in almost every instance the obligation is transferred to a Mohel.

In my work as a Mohel, I’ve observed a fair amount of discomfort with the idea of ritual circumcision, often expressed in the form of crude and stale jokes (I can no longer count the number of times I’ve been asked what I think of the 1993 Seinfeld episode about the drunken, crazy Mohel).  I’ve met people who have misgivings about performing circumcision in public in the name of religion.  Because there is so much misunderstanding about the meaning of Brit Milah, my job is to present this time-honored experience as what it should be—a sacred religious gathering that celebrates the miracle of new life, the joys of parenthood and the blessing of family, and as a time to affirm that there will be another generation of the Jewish people, something that is in its own way miraculous.  Circumcision, while important (it happens to be the oldest continuously practiced Jewish ritual), is merely the physical symbol of our commitment to the continuity of the Jewish way of life and performing it takes no more than three minutes of a 30-minute ceremony.

These elements were all present at my grandson Noam’s bris.  He was ushered into the sanctuary on a pillow by his great grandmother and two grandmothers while everyone in the room soulfully sang “Hamalach Ha-Goel,” a song based on a verse from Genesis 48:16: “May the angel who has delivered me from all harm bless this child.”   We offered prayers that the world become a world of co-existence and tolerance and sang “Eliyahu Hanavi” as the baby was placed on the Chair of Elijah.

Next was the actual milah (circumcision), the physical ritual that symbolizes the welcoming of the baby into the covenant.  Serving as Mohel for one’s own son or grandson is a complex task.  Obviously, it’s necessary to remain focused on the technical aspects of the procedure.  But performing this ancient ritual for a grandson also draws forth a unique emotional response.  My eyes filled with tears as the baby, lying on a pillow, was placed on my father-in-law’s lap as he sat in the Chair of Elijah.  In the days leading up to the bris my son pondered if he should fulfill the mitzvah of milah, required of Jewish fathers, by performing a key step of the circumcision.  It’s uncommon for a father to do this, but Eitan had obtained some training and experience in performing ritual circumcision while living in Israel.  We agreed that I would perform most of the elements of the ritual but would guide him in fulfilling the actual mitzvah, the particular step that involves the removal of the foreskin.  When the moment came, I urged Eitan to embrace the moment as a deeply spiritual one.  In performing this part of the ritual for his son, he should have in mind the Kavanah, the spiritual intention, that he was doing so to give tangible expression to his and his wife’s commitment to inspire their son to make the world a place of greater holiness and blessing because of the Jewish traditions and values that they would teach him.

The moment the circumcision ritual was performed was deeply emotional and meaningful for me.  Family and friends quietly sang a beautiful song called Ve-Zakeini which asks God that we merit the privilege of raising children who are devoted to bringing goodness into the world.  Four generations of our family—a great grandfather, me, Eitan and Noam—were in one place for the sacred purpose of welcoming this beautiful new baby into the family of the Jewish people and affirming that he, along with the rest of his generation, would carry the story of the Jewish people into the future.

It’s not every day that a Mohel officiates at his own grandson’s bris.  For me, this day vividly confirmed what Brit Milah is all about.  It’s not a time for jokes, nor is it a time for someone to rapidly recite a few Hebrew prayers and then perform a ritual that people may find awkward and inaccessible.  For me, a bris is nothing less than a celebration of the miracle of new life and the affirmation of a solemn promise that the story of the People of Israel will have a promising, new chapter.  That’s what it was on the day of my grandson Noam, that’s what I strive for it to be every time I officiate at a bris.

About the Author
Rabbi Mark Cooper was raised in Los Angeles and has been a congregational rabbi for nearly 30 years, serving synagogues in Natick, Massachusetts, Aberdeen, New Jersey and South Orange, New Jersey. He has been the rabbi of Oheb Shalom Congregation for 17 years. Rabbi Cooper is also a mohel active in the New Jersey/New York area. He and his wife have five sons.
Comments