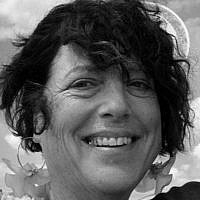 The Blogs
Amy Rappaport
Apply for a Blog
Please note that the posts on The Blogs are contributed by third parties. The opinions, facts and any media content in them are presented solely by the authors, and neither The Times of Israel nor its partners assume any responsibility for them. Please contact us in case of abuse. In case of abuse,
Report this post.

I made aliyah in September of 2018 at the age of 57. Before 2018, I was terrified of visiting Israel, let alone live there. I dreamed about going to Israel many times during my life, but I never went there until 2017.

My maternal grandparents, who lived their lives in New York City, passed down to my brother and me their fear of being in Israel. From their perspective, I can understand why they would feel this way. “Since its establishment in 1948, the State of Israel has fought eight recognized wars, two… intifadas, and a series of armed conflicts in the broader Arab–Israeli conflict.“

I was living with Mikaere, who later became my husband. He had a strong sense of certainty as to what my soul needed. I had told him that I had wanted to live on a kibbutz in college, but my family forbade me to go to Israel. He had a dream that G-d told him that he needed to bring me to Israel. We were living in the USA at the time. He knew that I was a staunch Zionist.

It was clear that I wanted to go to Israel, but I said that I was too afraid to make a trip to visit. He said that he would protect us. He is from New Zealand, and he is what is called “kiwi tough.” But that is a story for another time.

I remember agreeing to go to Israel, but the fear I felt was so overwhelming that we almost did not go. Yet, when I landed in Israel, like so many olim, I felt a deep sense of gratitude that I finally made it to the land. I planned on making aliyah and then after a brief stay, return to the States with Mikaere. My fear was intense.

I wanted to make aliyah because I believe that every American Jew that makes aliyah is good for Israel. I also wanted to make aliyah to honor my grandparents, who taught me to believe in G-d and passed down the tradition of Judaism to me. Again, a story for another day. I knew I would be proud of being Israeli, but I did think that I had the courage to live in the land. I prayed, and we decided to stay in Israel.

After Mikaere brought me to Israel, he was not sure what to do. We were blessed to be able to live in the Old City in Jerusalem. He felt the holiness there, especially when he went to the Western Wall. He prayed and felt G-d’s presence. He decided that he wanted to convert to Judaism, Orthodox Judaism. He has been on that journey ever since. Our diverging and now converging Jewish paths are another story, for another day.

We were so grateful to have lived in Israel. We lived mainly in Tzfat, Nachlaot, and Tel Aviv. We were blessed to have met extraordinary people and develop beautiful friendships and connections. Sadly, in 2019, Mikaere and I split up for a while, and I remained in Israel. He left to go to graduate school in Belgium. I began the amazing masters in Israel Studies program at Ben Gurion University in 2020. We got back together last year. We always loved each other, but the trauma we both suffered in our childhoods has gotten in the way. We have done focused and deep healing work and decided to get married.

We have been trying to get back to Israel since last September. Due to the Israeli government’s restrictions barring foreign nationals from being able to return home with their spouses, we have been denied entry.

After such a long journey to finally overcome my fear of living in the land of Israel, I am heartbroken that I cannot do so with my husband. The State of Israel is disregarding one of the most fundamental principles of a democracy: to honor an Israeli citizen’s legal right to have our spouses with us. Israel is not acting as a democratic state — undermining the very principles of providing a safe haven for Jewish people and our families. I respect and understand why Israel is not welcoming everyone who wants to come to Israel. But there are ways to keep us all safe and be the authentic democracy Israel aspires to be. Yet again, a story for another day:)

I welcome any comments and questions.

About the Author
Amy Rappaport made Aliyah in September of 2018. Her grandparents always dreamed of coming to Israel so Amy wanted to make Aliyah in honour of them. She's been a Zionist since she was a teenager. Though there are many aspects of living in Israel that are difficult for her (it takes her a long time to learn a new language), she loves it here and has chosen to make Israel her home.
Related Topics
Related Posts
Comments