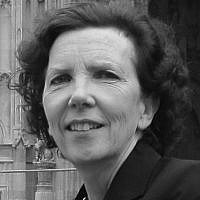 The Blogs
Janet Royall
Apply for a Blog
Please note that the posts on The Blogs are contributed by third parties. The opinions, facts and any media content in them are presented solely by the authors, and neither The Times of Israel nor its partners assume any responsibility for them. Please contact us in case of abuse. In case of abuse,
Report this post.

Anti-semitism is abhorrent and the values of our movement mean that it cannot and must not be tolerated. That was the starting point for my inquiry. Labour has a proud record of tolerance, anti-racism and standing up for minorities, and our leader has been at the forefront of many of the struggles for the dignity of all peoples. Sadly, however, there is now a feeling among a growing part of the Jewish community that they do not feel welcome in our party. There is too often a culture of intolerance where Jews are concerned and there are clear incidents of anti-Semitism.

For many years, Jews of all ages have strongly supported Labour, sharing our values and vision for society. I celebrate the fact that the Jewish Labour Movement affiliated with the party as a Socialist Society in 1920. The Union of Jewish Students says it has “an extremely positive relationship with Labour students, with many local clubs being strong supporters of Jewish students”. And the stories of great relationships between members of the JLM and some MPs, fostered at university, are legion. This makes the situation at Oxford University Labour Club all the more troubling.

I know that you will share my disappointment and frustration that the main headline coming out of my inquiry is that there is no institutional anti-Semitism in Oxford University Labour Club. That is true, but it is only part of the story.

I am clear that in the OULC there is a cultural problem which means that Jewish students do not always feel welcome. And we have to take action to change this situation. Many students reported that should a Jewish student preface a remark “as a Jew …” they are likely to face ridicule and behaviour that would not be acceptable for someone saying “as a woman…” or “as an Afro-Caribbean”.

This should not be tolerated.

There is sometimes an environment in which Jews cannot debate, or feel safe to do so, unless their every remark is prefaced by criticism of the Israeli government. Yet no preconditions are placed on women debating sexism. It is not a prerequisite that Muslims condemn the atrocities of this or that government before they may enter a debate on foreign policy. These double standards are not acceptable.

On other occasions anti-Semitism is used as a factional political tool and clearly this is inexcusable.

Our party must be a place where, despite robust discussion and vigorous disagreements, Jews and people of all ethnic backgrounds feel able to express their views.

I have made a series of recommendations that can be taken forward immediately which include training and support for those in leadership positions, a better reporting mechanism, a properly resourced procedure to investigate swiftly and take appropriate action when allegations are made. These may seem bureaucratic but I believe that this is critical if we are to raise awareness, prevent incidents of anti-Semitism and deal effectively with those that occur.

Some of the most important issues I considered I have left for the Chakrabarti review of which I am proud to be vice chair. These include the Macpherson Principle which puts victims at the heart of the reporting process, the vetting of candidates, the principles we should adopt in terms of social media and the boundaries of acceptable discourse. Words like ‘Zio’ and tropes such as ‘blood libel’ are obviously anti-Semitic, but there are other words in which the context in which they are used is critical so guidance is necessary.

I hope that the adoption of my report and its recommendations will be considered as the first step in a process which we will carried through with the Chakrabarti review. I will continue to be guided by the principles of the 2009 London Declaration, signed by the then Prime Minister, Gordon Brown, “Parliamentarians shall expose, challenge and isolate political actors who engage in hate against Jews and target the state of Israel as a Jewish collectivity. Parliamentarians should speak out against anti-Semitism and discrimination directed against any minority, and guard against equivocation, hesitation and justification in the face of expressions of hatred.”

We should not rest until we can be confident that Jews once more feel comfortable in all parts of our party and movement.

The fight against the virus of anti-Semitism is a matter for us all, and it is especially important for people like me, a non-Jew, to identify, call out and act upon any incidents of anti-Semitism that we find, and not be afraid to do so.

• This column was first published on the Jewish Labour Movement’s website. See www.jlm.org.uk