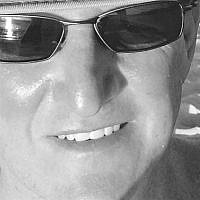 The Blogs
Larry Linton
Apply for a Blog
Please note that the posts on The Blogs are contributed by third parties. The opinions, facts and any media content in them are presented solely by the authors, and neither The Times of Israel nor its partners assume any responsibility for them. Please contact us in case of abuse. In case of abuse,
Report this post.

The recent article in the Times on Alex Kerten and his Gyro-Kinetic Method in the treatment of Parkinson’s brought into focus my own personal journey.

I have always liked Michael J. Fox. On my first trip to the United States, after seeing him in “Back to the Future”, I had to find those same red striped, white leather Nike’s as well as a pair of Original 501 Levi’s — with the button fly. I returned to South Africa successful. Then, watching him on “Family Ties”, I tried to adopt the same “preppy” look as a young student of law at the University of the Witwatersrand. Years later, when he announced that he had Parkinson’s disease, I was sad for him. Little did I know at the time, but I would also become a member of the same gang.

My life changed when I was diagnosed with PD at the age of 49. At the time, my walking gait was off, but was only on the right hand side. It felt like my right leg was not in synch with the left and had simply stopped working — I didn’t have a natural heel-to-toe movement, it was more like a “slap”. Having enjoyed recreational running for years before then, I thought I could run it off. Well, that didn’t last very long — I sounded like a galloping mule — with a limp! Also, I had a resting twitch and tremor in my right hand. At home or in the office, I would try and disguise it by holding my arms, sitting on my hand or clasping my hands together. I was keeping a secret.

In a way, the diagnosis brought a sense of relief — I finally knew what I had. But it was a difficult time. For most of the first year, I became a recluse. Always the life and soul of a party, I couldn’t leave the house. When I did make it out the front door, I could not wait to get back to my house and the couch — the couch became my comfort zone. I did make it into the office, but I pretended I was really busy and buried myself in my office. I did not engage with my staff, and declined client meetings and team events. Everyone told me that me that Parkinson’s was not terminal, but in my mind, my life was over.

Parkinson’s had taken control and it was consuming me. I was a 50 year old, with an 80 year old disease. The lowest point I reached was when I was alone in the house, on a Saturday night. I did not want to be alone with my Parkinson’s. I recall shouting and swearing – at myself. And, then I became overwhelmed with emotion and starting sobbing. I wailed like a baby. The more I thought about myself, the more I cried.

But even in that darkest point, I knew I had to make a change. I was not 80 years old. I had to start thinking differently. I had to get off the couch. I did.

I went downstairs and got on my dusty treadmill. I walked. I no longer cared what it sounded like. The important thing was that I was moving forward — literally. Slowly but surely over the next few weeks, I noticed that my “slap” was quietening and I was returning to a more natural walking gait. I persevered and then started jogging for one minute after a ten minute walk. My thought process kept changing. The more I walked/jogged, the better I felt. I was starting to think in the present, not the future. I was a 50 year old, back on the treadmill.

Growing up, I loved drumming. But living in an apartment in Johannesburg with my widowed mother, and grandmother, it was never the place to own a drum set. Instead, I banged my mother’s furniture to pieces. The lounge suite was my drum set. In my mind I was surrounded by a sixteen drum, ten cymbal set. Then life took over – matriculation, university, marriage, and emigration – first to New Zealand and then to Canada. Before I knew it, I was only drumming on the dashboard of my car — when stopped at a traffic light!

Seeing the positive results with my walk/run routine, I decided to return to drumming. I purchased a cheap, entry level electronic set that I could play with headphones — boy I wish that they had those when I was in my mother’s apartment. I went further and also purchased a set of bongos and congas. I started playing an hour every day and just lost myself in the beat of a song. My arms – particularly my right side – felt fatigued but my twitching and tremor in my right hand stopped.

Looking back, my life changed dramatically when I was diagnosed. But, it changed for the good. Today, I am living more mindfully in the present, surrounding myself with loving and understanding friends, family and work colleagues. I have accepted Parkinson’s into my life. I have become, as Alex Kerten describes in his book, a Parkinson’s Warrior. I am adopting his Gyro-Kinetic Method into my daily exercise regime. I already know that it works.

Michael J. Fox has retained his sense of humour, and like him, I can now recall some comedic moments, even on the day I was diagnosed. One of the clinical tests in reaching a diagnosis is a writing test. Now, you all know what a doctor’s handwriting looks like – well, when the doctor wrote out the prescription I was sure he was also a member of the PD gang! It was definitely worse than mine. When discussing the prescribed medication, he took the time to list all of the potential side effects – hyper sexuality and adopting an addictive lifestyle like gambling. Those are side effects, really? I told my spouse that if she sees me in a trench coat, looking for the credit card, she is to hide the car keys and lock the doors!

I hope Alex doesn’t mind, but my advice to fellow members of the PD gang is, simply, to move. Walk, consciously swing your arms, dance — like no one is watching — get lost in the song and become Tony or Danny in “Saturday Night Fever” or “Grease”. Or even better, join my band!

Yes, I have formed a band and nothing beats playing in front of a live audience. I am also more engaged at the office. And, I am training for a half-marathon in April.

Parkinson’s has taken my place on the couch – like that old friend who says he is only staying for a few days, but hangs around for a while. It is part of my life but it no longer controls me.

Like Marty McFly, I have gone back to the future!

About the Author
Larry Linton is originally from South Africa. Lives in Canada for the past 25 years. Immigration lawyer. Married with two adult children.
Comments
Advertisement