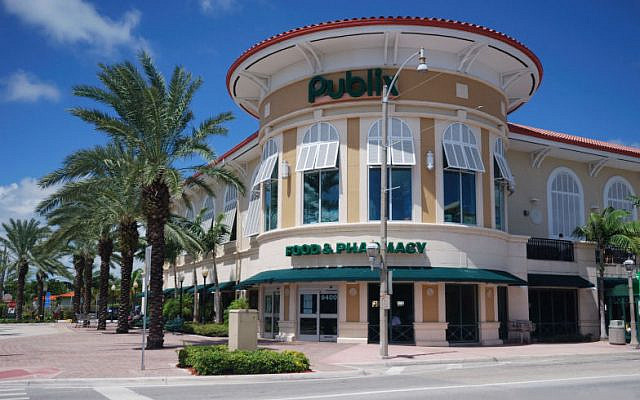 We moved to Miami right after I turned nine. I’m an early December baby, a Sagittarius.

In the beginning we lived on Coral Way, right off of SW 17th Avenue. We lived in the real Miami, in a mostly Cuban neighborhood with a small, family-owned corner grocery store:  Virgen de la Caridad supermarket.

We stayed in the area for about two years, until an aunt, who was a real estate agent, found us an apartment in the suburbs, south of the Falls on US1.

These apartments were much nicer but lacked the coziness and authenticity of our first apartment building in the heart of Miami. And instead of having a little bodega supermarket on the corner, we now lived next to a Publix supermarket.

This would be my first Publix.

It was literally right next door, past a small metal gate built into a brick wall that separated the two properties. That was the big selling point to that particular real estate, the Publix right next door.

My mother would do the shopping during the week on Sundays after church and I would pick anything she forgot during the week. I became the Publix errand boy.

I didn’t mind it so much because it gave me my first tiny taste of freedom and independence. Also, the Publix bakery gave kids a free chocolate chip cookie in those days and my friends and I took advantage of the complimentary service as much as I could.

Looking back now I realized that living in Coral Way at that time made me a real Miamian but then moving to Pinecrest next to a Publix made me a real Floridian.

Publix is to Florida what bakeries are to Paris. You can almost go anywhere in Florida and you won’t be too far from a Publix. They’re probably the biggest real estate owner in the state.

To knowingly love and acquiesce to Publix is kind of like being a Scientologist, a part of a happy UFO food cult. People from other states hear the word “Publix” but they don’t understand what it really means to us Floridians and how the mere idea of a Publix permeates our tropical, sun battered brains every damn day.

A Florida man cannot exist without their Publix. It’s what feeds us and nurture us through each Florida moment in our lives from hurricane prep to Miami Dolphins tailgating beer runs. You will always end up at Publix no matter what part of the state you’re at.

They say there is a thin line between love and hate and this applies to Publix as well.

There will be times when every Floridian will stray from Publix from time to time but don’t get me wrong because we always come back to her with our tails between our legs.

The great, consistent quality of course but it’s also a state of mind. Publix is also very Zen, especially when you get into that shopping zone when nothing matters except obtaining every damn thing on the list.

You can’t really make a Florida film without a Publix in it. It’s like it would be missing something.

That’s why I always lauded Larry Clark’s film, Bully, based on a real life murder in Weston, FL in the 90s.

The first scene of the movie is at Publix, with the protagonists working at the sandwich stand. Now there’s a director that understood what it means to be a Floridian.

From childhood into adulthood, as a pretty much life long Floridian, Publix has been the one constant thing and I love it and hate it.

There were times, depending on where we lived, when we’d deviate from Publix and perhaps have brief affairs with Winn-Dixie and Sedano’s, but those affairs were mostly fickle and opportunistic. No matter what, we always came back to Publix, no matter inflation, or price of gas or where in our lives did we find ourselves.

The green signage was always there, like the blue light at the end of the dock in The Great Gatsby. So very false, and superficial; a green monster of capitalism if you will with a very strong message: WE ARE EVERYWHERE AND YOU CANNOT ESCAPE.

As an adult, Publix still permeates my life, despite my sometimes cheating with BRAVO or Sedano’s Supermarkets.

I love it because of the convenience and the nostalgia and I hate it because no matter what, if you’ve shopped there most of your life it will feel like you’re living the same Publix trip over and over again; a kind of Publix Groundhog Day.

We Floridians walk like zombies imagining from time to time, which Publix will be our last Publix and only then will your Florida life come to an end.

About the Author
Fawzy Zablah was born in El Salvador but raised in Miami. Among his works is the short story collection CIAO! MIAMI and the novel RARITY OF THE CENTURY. His fiction has been published widely at Hobart, 3AM Magazine, Acentos Review and Expat Press. His short story, THIS MODERN MAN IS BEAT, was adapted into an award winning short film in 2015 currently playing on Amazon Prime. He is hard at work on a novel about the Arabs and Jews of Latin America with the working title of GITANES.
Related Topics
Related Posts
Fawzy Zablah