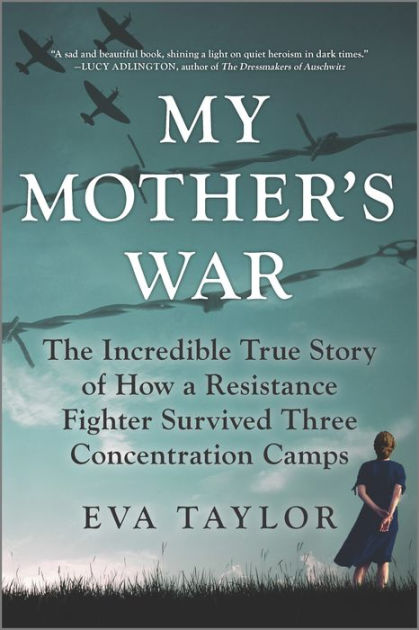 My Mother’s War, by Eva Taylor (Hanover Square, release Aug 5, 2022) is the true story of, Sabine Zuur, a young Dutch girl who joined the underground resistance against the Nazis, and for her efforts landed in the infamous concentration camps of Amersfoort, Ravensbrück, and Mauthausen.

Unlike the six million innocents who perished at the hands of the genocidal Nazis, Sabine’s circumstances were different. Sabine was not Jewish. Nevertheless, she suffered and endured all the abuses the genocidal Nazis could muster, but miraculously survived to tell her story, but from beyond the grave.

The author, Eva Taylor, did not know the full extent of her mother’s resistance activities, capture, internment, loves, losses, and the extent of the cruelties she suffered at the hands of Hitler’s master race of brutes. It was Taylor’s discovery of a treasure-trove of her mother’s photos, documents, and love letters, which chronicled her suffering during the darkest hours of man’s inhumanity to man.

Sabine’s first and only real love, Taro, was a fellow Hollander who had joined the RAF to fight the Nazis as a pilot. After multiple sorties over the French coast, a German Messerschmitt shot down his Spitfire. Taro crashed and burned dying instantly. It was not long after her tragic loss, that Sabine joined the Dutch resistance safely harboring downed pilots and serving as a courier for the resistance.

Betrayal was her hidden enemy; it carted her off to prison as a nacht und nebel inmate. The German phrase nacht und nebel means night and fog. Internees classified as such, consisted of political activists and resistance fighters, whom the Germans tore from their homes under the cover of night or fog and mistreated them savagely. Her nacht und nebel label was analogous to affixing a yellow Star of David on her garment, a guaranteed one-way ticket to the work-death camps, Amersfoort, Ravensbrück, and Mauthausen.

Despite the fact that the ghastly conditions in the camps are well documented, what Sabine’s letters revealed was the improvised cruelty the individual Nazis inflicted on the camp’s victims. In one horrific example she wrote, “If by chance we got up [in the barracks at night] and touched a light switch, even by accident, we would be shot instantly.” However, in a strange twist, Sabine survived the war with the help of a jailed career criminal, Franz Josef Gebele. Because Gebele was German, and not Jewish, he enjoyed special camp allowances. Sabine was the beneficiary of his privileged status, as he was smitten with her.

In another bizarre turn, Sabine worked putting together parts for V2-rockets, which in turn the Nazis used against her homeland. Also, there were German factories, like Siemens, which built their facilities close to concentration camps to exploit the free labor whom they worked to death. Neighboring farmers complained to the Nazi authorities that they were able to see the cruelties heaped upon the prisoners from their fields, which was terribly upsetting. So they requested the camp guards move their ruthless activities elsewhere, out of sight.

Sabine noted the Nazis were equal opportunity butchers, who enthusiastically murdered with impunity the old, young, Jews, Roma, Communists, Gays, and those with disabilities. Their ruthlessness had no limits. History authenticated what she and other survivors bore witness to, experienced, and endured.

Unlike the countless millions who perished, Sabine survived not only the war, the camps, and the ovens, but the betrayals and complicity of the silence of her friends and neighbors.