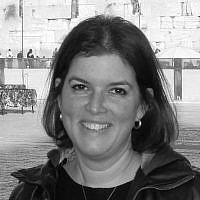 The Blogs
Martine Alperstein
Apply for a Blog
Advertisement
Please note that the posts on The Blogs are contributed by third parties. The opinions, facts and any media content in them are presented solely by the authors, and neither The Times of Israel nor its partners assume any responsibility for them. Please contact us in case of abuse. In case of abuse,
Report this post.

My Name is Rella Krok. I was born in the small town of Rakashik, Lithuanian in 1918. My father Yankel Krok was a leather merchant. He was a wealthy man and upstanding member of the community. My mother, Dvora Gruniye (nee Assness) took care of us all. We were 6 kids – Ettie, Ollie, Yaakov, Zalman, Sonya, Sima and me. I was the baby.  I was the lucky one.

Ettie married Mendel Maron and Ollie married David Yaakov. The young couples made the long sea journey to Cape Town, South Africa, where their children were born. The pain of separation was excruciating. The rest of us stayed.

I finished school and went on to study nursing. I was living in the ghetto of Kovna and working in the hospital nearby.  The atmosphere was tense. Everyone was afraid. I was engaged to be married to a fine young man. He wanted to escape. He decided to run. He was going to cross the border of Lithuanian and keep going until he was safe. He begged me to run with him. I refused. I could not leave my home, my family. He was shot dead near the border.

One of my colleagues, a Gentile Doctor in the hospital, approached me quietly. He told me that if I was ever in trouble to come to him.

People were starving. There was no food. I made a decision. That night I was going to look for bread. I removed my yellow star and snuck out after dark. I found someone willing to sell me some bread. I hid it under my thick winter coat. I was almost back in the ghetto when I was caught by soldiers. I was terrified. What now? They took me to a room somewhere and locked the door. They told me to strip naked. I did. I was shaking from fear. Are they going to rape me? Are they going to murder me? They forced me to lean over and they whipped me. It was agony. The humiliation more than the pain. They told me to get dressed again. They had had their fun. They dumped me back in the ghetto, without the precious bread. Everyone was still hungry.

What now? What next?

I approached the Gentile Doctor. I told him I need a place to hide. He did not hesitate.

I spent the next 2 years in a tiny crevice dug below the basement floorboards. I never saw daylight. The Gentile Doctor’s wife was angry that the Gentile Doctor had brought me into their home and endangered their lives. She was terrified. I was hidden from their children. They lived in fear that the neighbours would hear a noise. I was alone all day and most of the night in this tiny little hole. Once a day, late after dark, they let me out to relieve myself and eat. I was embarrassed and ashamed to use a pot. A pot that the Gentile Doctor’s wife had to empty and clean. A meal was raw potato skins and hard bread. But a meal it was.

I owe them my life. I survived.

After the liberation, I returned to Rakashik to my family home, hoping and praying that I would find my family alive. It was not my family I found. The Lithuanian neighbours had claimed our family home. It was now theirs. I begged them for knowledge of my family, of their whereabouts. They would not let me in.  They slammed the door in my face, so I knocked again. My mother’s Lithuanian neighbor and friend, opened the door and threw some of my mother’s belongings at me. My mother’s winter coat. My mother’s starched white linen. I sobbed. She threw my mother’s things at me and told me to go. My old school friends crossed the street to avoid me.

My brother’s twin infant boys were cared for by a Nanny. She adored those boys. A streak of hope…. Maybe she took them to be her own. Maybe my nephews were alive. Maybe they were safe and sound. I started to run. I ran all the way to her house and knocked on the door.  But I was wrong.

They were all dead. My family had not survived.

My sisters Ettie and Ollie sent me a ticket to Cape Town. I travelled by boat. I was with them for nearly a year. They begged me to stay, to settle in South Africa, to be close to them. I refused. I would not. I could not.

I made aliyah and settled in Petach Tikva. I found a job at HaSharon Hospital as a surgical nurse. There was no other place for me. Israel was now my home. Israel was now MY home. Here I was safe. I would always be safe.  I was safe for 60 plus years.

I am buried in the Yarkon Cemetry. I have a grave.