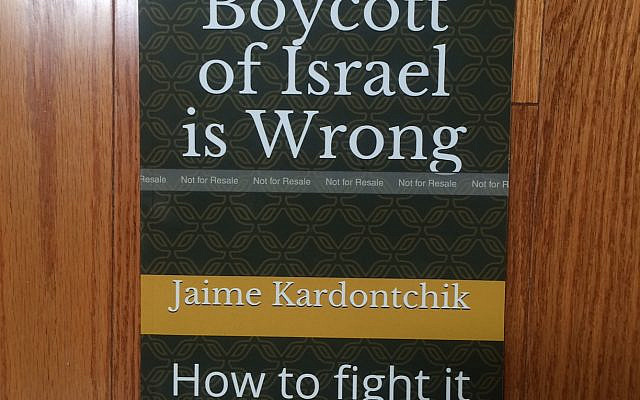 Boycott and BDS of Israel in educational settings (K-12 schools and colleges) is becoming commonplace. I wish I had this book when I was a teenager in Middle School, to distribute it to my class. I had to sit then idle listening to the antisemitic diatribes of a teacher in front of a class of 40 students, some of them Jews. This is equivalent to a public rape of a minor in front of a captive audience by an adult using the power of the pulpit and the authority endowed by the school to the teacher.

Hate words said on a pulpit have consequences. The secondary school was Julio A. Roca in Buenos Aires, Argentina. I was in 10th grade. The class was an Anatomy class. A few days after one of his antisemitic diatribes, I was walking towards the bus-stop to go home, three blocks away from school, when someone approached me from the back. I turned around and I was punched on the face by Vargas, one of the students in the Anatomy class. I was left lying on the street and he walked away.

In the past I had seldom met Vargas at school nor talked to him: we were about 40 students in a packed class. I was seated in a row next to a window. He was seated three rows away from me, deep into the room.

One week later, he came to me and apologized.

The recent resolution of the San Francisco Teachers Union calling for a boycott and BDS (“Boycott, Divest and Sanction”) of Israel is plain antisemitism disguised as anti-Zionism or in its pollyannaish version of “support for the Palestinian people”. It adds fuel to the latest violent attacks against Jews from New York to California.

If you reside in the Bay Area and have kids in school contact their teachers, before this hate spreads from San Francisco down to the Silicon Valley and Los Angeles. I detail in my book some actions parents can take to confront antisemitism at schools.

You can purchase the book at Amazon in paperback or in its Kindle electronic version.