My latest book Through a Bible Lens: Biblical Insights for Smartphone Photography and Social Media hot off the press from publisher HarperCollins arrived last week in Israel from Tennessee. Nice to finally see it in print. Thumbing through the book to see how my photographs appear in miniature matt, Trump’s wall jumped out at me. 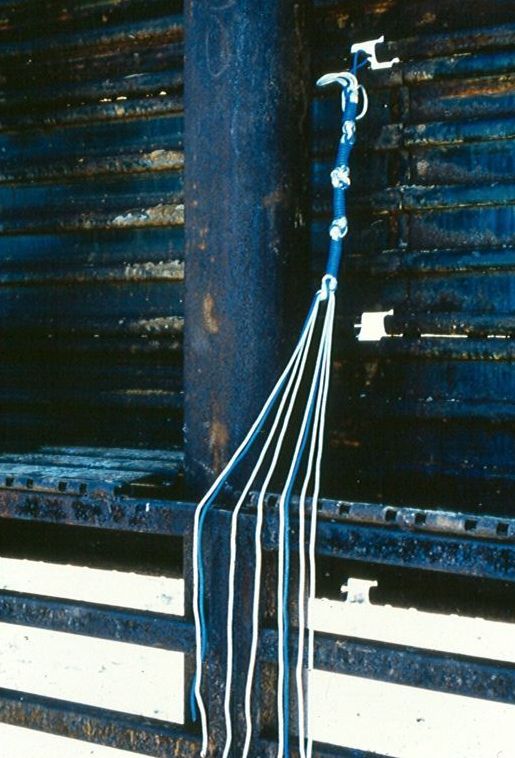 The photo shows a steel wall separating the United States from Mexico where San Diego meets Tijuana at the Pacific Ocean. In the photo is a giant ritual fringe (tzitzit) with a blue strand linking sky to sea that I had draped on the wall. On the same page, there are photos of rope tzitzit flowing into the Pacific from a tree trunk at Washington State, and tzitzit flowing into the Atlantic Ocean from the coasts of Maine and Florida. There are no walls at the Washington, Maine and Florida corners of USA.

When I moved from New York to accept the position as dean of New World School of the Arts, University of Florida’s arts college in Miami, I sensed that I had come to live at one of the four corners of continental United States. The photos in my book document my Four Wings of America environmental artwork linking the four corners of USA. I created it for the City of Miami’s centennial celebration in 1996. In 1996? Twenty-three years ago, Trump’s wall was already up at the southwest corner of USA.

While working on my continent-wide artwork, I began to see the four corners of America through a Bible lens. The biblical Hebrew word kanfot used for the four “corners” of one’s garment and metaphorically as the four “corners” of the earth is the same word used for “wings.”  The preeminent biblical commentator Rashi points out the links between corners and wings, “The fringes are placed on the corners of their garments, alluding to God having freed the Israelites from Egypt, as it states, ‘and I carried you on the wings of eagles.’” It brought to mind four biblical passages.

“Speak to the Israelites and say to them that they shall make fringes on the corner wings of their garments for all generations. And they shall include in the fringes of each corner wing a thread of sky-blue wool.” (Numbers 15:37)

‘You saw what I did in Egypt, carrying you on wings of eagles and bringing you to me.” (Exodus 19:4).

Forty years later standing on the east bank of the Jordan River, Moses reviews the laws of the Torah for the generation born in the desert before they enter the Promised Land.  He again said:

“Make yourself fringes on the four corners of the garment with which you cover yourself.” (Deuteronomy 22:12).

Before donning his prayer shawl each morning, a Jew says, “May the talit spread its wings like an eagle rousing his nest, fluttering over its eaglets.”  The biblical prophecy in Isaiah 11:12 is being realized in our day:

I created Four Wings of America as a visual commentary that conceptually links wings to corners of a garment and to corners of the land.  I made white rope multi-strand fringes each with a sky-blue thread to attach to the four corners of America.

I contacted American Airlines, the largest U.S. corporation in the wing business, to request their sponsorship of my artwork.  They invited me to present my proposal. I spread the rope tzitzit on the boardroom table to explain to the airline executives their biblical significance and why I wanted to create a visual commentary by placing them at the four corner/wings of America.  It became apparent my proposal was appreciated, when the airline’s vice-president said, “It is as if the United States is spiritually lifted up by its four corners as the blue thread of the fringes links the sea to the sky.”  They agreed to sponsor the project by flying me to the four corners of America to physically realize my spiritual metaphor.

I attached tzitzit fringes to a swaying palm shading the beach of a balmy Florida bay and to a huge barnacle-encrusted boulder on the Maine coast. I flew to Seattle and drove to Neah Bay, an Indian reservation at the end of the Olympia Peninsula in Washington State, attached the tzitzit to a tree at the shoreline.  At the southwest corner, the tzitzit shuddered in the wind hanging from the steel wall that separates San Diego from Tijuana at the Pacific Ocean.

My book with all fifty full-color pictures is available at Amazon and most other Internet booksellers as well as at your local bookstore. See the book’s blog at http://throughabiblelens.blogspot.com.