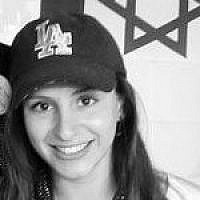 The Blogs
Miriam Young
Apply for a Blog
Advertisement
Please note that the posts on The Blogs are contributed by third parties. The opinions, facts and any media content in them are presented solely by the authors, and neither The Times of Israel nor its partners assume any responsibility for them. Please contact us in case of abuse. In case of abuse,
Report this post. 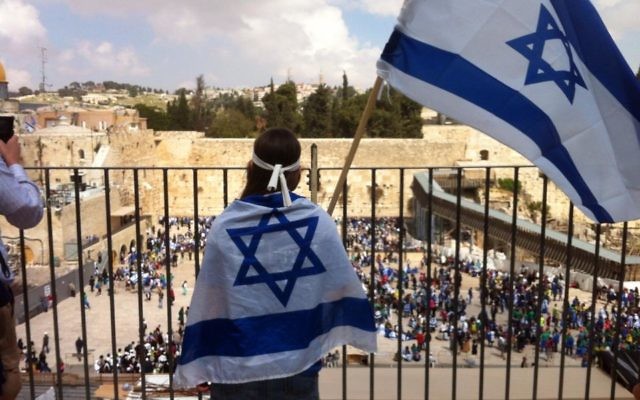 I used to be a cheerleader and I definitely know how to have team spirit. Now my team is Israel. If I could walk around carrying Israeli flags with me every day, I would. So naturally I couldn’t be happier to have an excuse to cover myself in blue and white and walk through the streets with a flag in my hand and one on my back. Yom Ha’Atzmaut. Israel’s birthday. Independence Day! Another holiday you can only fully appreciate or understand through experiencing it in Israel. So I want to share my experience from today with you. This was my second year volunteering on Yom Ha’Atzmaut with the Israel Forever Foundation. Here’s how my day went:

Starting with last night. Since Jewish holidays start the night before. We decorated the house with flags for Yom Ha’Atzmaut.

You can never have too many flags!

Squeaky (my dog) and I love Israel!

While the rest of Israel was out celebrating, I stayed home to hang out with my favorite people, my four awesome Israeli roommates. I had to wake up early the next morning to volunteer.

My four awesome Israeli roommates, Squeaky, and me!

We could see fireworks in every direction, from our roof!

I really liked watching the fireworks.

TODAY: We left Herzliya early this morning to meet at a beautiful hotel in Jerusalem for brunch and discuss the volunteer work of the day.

Enjoying the early morning view over Jerusalem, from the David Citadel Hotel.

Because of Yom Ha’Atzmaut, the hotel served unlimited free champagne with our brunch.

Mmm celebrating with one of the awesome volunteers!

Turned out the jets were flying a few hours later….. (but we still happened to see them). So we gathered our volunteer materials and headed to Kikar Safra to meet the 5000 students from around the world who came to Israel with March of the Living. This means they first visited Poland and were there for Yom HaShoah (Holocaust Remembrance Day) and then made it to Israel in time for Yom HaZikaron and Yom Ha’Atzmaut (Memorial Day and Independence Day). At Kikar Safra there were live performances of music and dancing.

Here we began to sign up the students from around the world as “Virtual Citizens of Israel”. As Virtual Citizens of Israel, they get to keep their connection with Israel even when they all go back to their home countries. All of the pride and none of the politics. Not all of us get to make Aliyah and move to Israel, but anyone can be a Virtual Citizen of Israel through the Israel Forever Foundation. So we spent the day signing people up! Then we began our march to the Kotel (Western Wall).

In this crowd of Jews from around the world, everyone has pins, bracelets, headbands, flags, etc. What everyone enjoys doing is trading these with each other to get all kinds of things from other countries. At the end, this is what it looks like!

The streets of Jerusalem leading up to the Kotel were closed off to the public and to cars; only open for the March of the Living parade.

I couldn’t keep the smile off my face, it felt so good to be a part of this mass of people showing such an appreciation for Israel.

Jerusalem views are the best.

5000 of us marched together, singing and waving flags. I wasn’t with them in Poland but I can only imagine the immense contrast between this march and their former horrifying one between the camps…

We finally made it to the Kotel. Spending Independence Day at the holiest site in Israel with all of these people from everywhere, couldn’t be more perfect.

At the Kotel with some of the volunteers. Ben, Stephanie, Miriam (me), and Roey.

Everyone sang Israel’s national anthem, Hatikvah, together at the Kotel. People sang a little and prayed a little. It was beautiful to see everyone so united. We had a chance to leave notes in the wall. This is how people sometimes ask for their prayers to be answered. My friend Ben wrote this, keeping our brothers and sisters from Boston in mind at this tragic time, even through our happiness of Independence Day.

We spent the rest of the day at the tank museum, Latrun! Where we had a big Independence Day BBQ dinner and finished signing people up to be Virtual Citizens of Israel. Latrun was filled with flags, blowing in the cool Jerusalem wind. A great place to spend Yom Ha’Atzmaut.

After walking all over Jerusalem and spending the day talking to countless people from so many interesting countries, I definitely feel like I had a fulfilling holiday. With the long drive home I was left to think about all of the people we met and experiences we shared today. How people from so many different places can go on this journey together. March of the Living. Learning about the horrors of the Holocaust, exactly where it took place. Then coming here and feeling the strong sense of Israeli pride.

How our common history is a greater link between us than any body of water or differences in language or culture. That wherever we may live, we all share the same homeland. The same promise of a future. Of freedom. Together we mourn and together we celebrate.

I hope this gives a sense of what today was like in Jerusalem. Beautiful and wonderful. Powerful. Truly a one of a kind experience….until next year. As I’m writing this I can hardly keep my eyes open after such an exhausting day, but I wanted to share this with you while it is still fresh in my mind. I am reluctantly taking off my flags now. But remember, if it was socially acceptable, this is how I would dress every day 😉

Lastly, in the spirit of Independence Day, here is an all new Yom Ha’Atzmaut song from my friends at StandWithUs. Enjoy!

About the Author
From Los Angeles. Lived in New York, Herzliya, Munich, and currently in London.
Comments