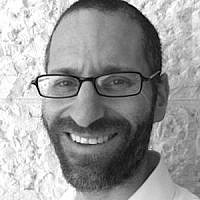 The Blogs
Ira Somers
Apply for a Blog
Advertisement
Please note that the posts on The Blogs are contributed by third parties. The opinions, facts and any media content in them are presented solely by the authors, and neither The Times of Israel nor its partners assume any responsibility for them. Please contact us in case of abuse. In case of abuse,
Report this post.

I guess you heard the negative news out of Israel…about a couple of assumingly well-meaning Jews taking matters into their own hands resulting in bloodshed. I was not sure how to feel about these acts, which is why I say “assumingly” because I could give proofs for their actions, even though the proofs still make me squirm a little. And therein lay my struggle. I believe 100% the Torah is from God, but my proof from the Torah does not sit well with me. So I struggle with how to feel and hope nobody asks for my opinion on these events. Would God smile on these individuals? Or, so to speak, put His hand over His eyes and shake His head?

This past Shabbos, Rabbi Avrohom Leventhal of Ramat Bet Shemesh, solved my struggle. His answer was steeped in Torah and lessons from our Sages in the Talmud. His answer was based on the line from the Torah that says, “You should fear God.” (Deuteronomy 10:12)

Was what these individuals did okay? Were their actions justified by Torah law? The answer: unequivocally NO. Rabbi Leventhal  gave brilliant proofs which I don’t want to dedicate too much space to here, but the gist was to fear God (relating very much to the mitzvah of fearing our parents). How so? We should fear doing anything that would detract from His (or our parents’) honor. These acts did not do that, especially when they put God’s holy Land of Israel, Jews, and religious Jews specifically, in a bad light.

We have to give HaShem nachas…you know, that feeling of pride in your kishkas when somebody close to you does something really good.

This week’s parsha, Re’eh, says, “You are children to HaShem, your God…” (14:1) G-d gave us 613 commandments, what He wants us to do with our lives and how He wants us to live our lives. But I think there’s something deeper here, about us being His children, and if you have kids, maybe you can relate. If you do not have kids yet, maybe you can think back to when you were a kid. If my living room was a mess with toys, as it usually is, and I told my children to clean it up within ten minutes, and I came back ten minutes later and found the room still strewn with toys, but all my children were sitting together nicely in a circle playing a game and getting along, I’d tend to forget about their straying from my command to clean the room. I still want it cleaned, but I’d get nachas from seeing them get along so nicely — much more so than if I came back and they were doing exactly what I said, cleaning up, but fighting over where the toys go and who is going to put away this toy or that one.

I think this goes for us, too, the Jewish nation. We are God’s children. He says so! And I think He just wants us to get along. I am not saying to trample on His mitzvot, God forbid! His commandments to us must still be observed, but I don’t think it should come at the expense of us fighting with each other, or worse, and it should definitely not come at the expense of us missing opportunities to give our Creator the chance to shep nachas.

May we each in our own way give HaShem nachas, and through this may we somehow unite our nation into the family that it is where members do not have to agree, but they can still love each other. And that, I believe, will be the ultimate source of nachas for our Father.

About the Author
Ira Somers grew up in America working first as an advertising copywriter and then as a school teacher. He is compassionate about inspiring others to see the best in everybody and helping people and businesses to succeed. In July, 2015, he made aliyah with his wonderful wife and amazing children.
Related Topics
Related Posts
Comments