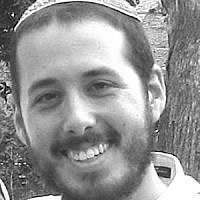 The Blogs
David Engelhart
Apply for a Blog
Advertisement
Please note that the posts on The Blogs are contributed by third parties. The opinions, facts and any media content in them are presented solely by the authors, and neither The Times of Israel nor its partners assume any responsibility for them. Please contact us in case of abuse. In case of abuse,
Report this post.

The latest Shabbat pandemonium has been triggered by the opening of “Yes Planet”, in the holy city of Jerusalem, on the holy Shabbat. Just another of many public Shabbat violations which are always expected to lead to more street posters and demonstrations (peaceful and violent) against the desecration of the Shabbat in the public sphere.

Basically, nothing new under the sun.

But this time around, I read one city council member’s words and understood that for the sake of intellectual honesty, something needs to be set straight here.

Jerusalem deputy mayor Mr. Nir Tamir said “We have fought and will continue to fight for the right of any population to signify their Shabbat in their own way,” in response to a religious council member’s objection to launch a Tel Aviv inspired bike rental system — which will operate on Shabbat and Chagim as well — in Jerusalem.

This is just a quote I saw today, but the choice of words is what has bothered me for quite a while, throughout the public Shabbat arguments our country has seen of late.

You see, Mr. Tamir, to be intellectually honest, you simply aren’t talking about Shabbat. The people you represent don’t keep Shabbat. There is no such thing as a population’s Shabbat, or to keep Shabbat in one’s own way.

I completely understand the value you find inherent in this day. It is a day where families want to spend quality time together doing recreational activities. A chance to get out and do things which aren’t possible during the busy work week. A day where the parents and children all benefit from a day off where they can relax and build up their strength for the upcoming week. I understand that is a day of positive experiences. But it is not Shabbat.

What is Shabbat then? Look in the Torah and in our tradition. It is extremely well documented. And it resembles nothing of what you are trying to promote. As an example, let’s agree that the only prohibition actually spelled out in the Torah is not to light fire on Shabbat. Electricity aside, if one’s Shabbat is being able to drive, or for buses to run with fires burning in the engines — can that be called Shabbat?

The Sages compiled an entire tractate dedicated to the vast amount of Shabbat laws. Amongst them is refraining from performing mundane actions one is used to performing during the week, in order to give a special ambiance to the Shabbat. If one’s Shabbat is to hang out in a mall or a movie theater — can that be called Shabbat?

The Shabbat is a religious entity. It was mandated by the Torah. Generations of Sages toiled to elucidate and transmit its many laws, for thousands of years. It certainly has many social values and benefits. But the Shabbat, as it is defined by Jewish tradition, is a unique day with a unique religious significance. It is a day of refraining from all forms of creation, as God did, in order to be submissive to His power and will, and in order to be able to focus on the most important things in life, from which we are distracted when we are occupied with “melacha”, namely: Torah, prayer, and connection to God. Quality family time, too, is promoted as a result of what the Shabbat forbids. Our Sages said,”Shabbatot and yamim tovim were only given to the Jewish people so that they could occupy themselves with Torah.” However you wish to understand this saying, you cannot call what you wish to promote in our holy city Shabbat.

Rabbi Yaacov Yisroel Kanievsky was forced to join the Russian army when he was young, in the biting cold of the Russian winter. When it was his turn to stand guard, one Shabbat, the soldier before him left him a warm, thick coat hanging on the tree so that he could keep warm. Only the young man refused to remove the warm coat which was hanging on a tree, in order not to violate certain Shabbat laws. Rabbinic ones! But it didn’t matter, because it was that important to guard the sanctity of Shabbat, the Shabbat which has become a secular “day of rest” and a matter of people’s preferences and conveniences.

I won’t ever condone Shabbat violation. But in this post, I’m not even saying stay at home, keep the Shabbat laws and spend your time learning Torah. This post isn’t a protest about public Shabbat desecration, even if I may support those. I understand that this population will continue doing what it’s doing, if not in public recreation sites, then at home or in Tel Aviv or anywhere they want. They will continue doing whatever they want on this day for as long as they choose. But let’s not call it Shabbat, because it isn’t. Anything called “their Shabbat” is not Shabbat. There is one Shabbat, and it cannot and will not be replaced.

It is true that no one has a monopoly on what Shabbat means. The same way no one has a monopoly on what an apple is. You cannot have a subjective definition of the matter. The facts speak for themselves. Apples have a certain shape, a certain texture, and a certain taste. You can’t claim that an apple strudel, as tasty and special as it may be, is an apple. It may have elements of apple, it may satiate like an apple, but it is not an apple.

So please, fight for what you want. If it’s freedom, if it’s rights, or if it’s against religious coercion. But don’t call what you are promoting Shabbat, because it isn’t.

Do what you will, but leave Shabbat to the religious, who practice it as was dictated to them by generations of Sages. They will keep the Shabbat so that if you decide one day to look for it, you’ll know where to find it.r

About the Author
David Engelhart learned in Yeshiva, served in the army, completed a degree in education, and is currently a father of 2 and a Technical Writer.
Comments