We got the call in the dark of night. Our son committed suicide. His brother found the body after several days. My body trembled. I screamed a horrific sound, then calmed and said Baruch Dyan Emmes – Blessed and True is His Judgment, a traditional Jewish saying. In the moments after my trauma passed, I felt a sense of relief for the emotional stress and pain our boy lived with every day.

I never again saw his body. Authorities would not let us hug him goodbye. He was a big muscular boy from army days, workouts, and hiking. Laying in his grave, the body looked tiny. It’s what he accomplished with his mind that stays with me. His voice fades with time. His laugh isn’t robust in my ears anymore. 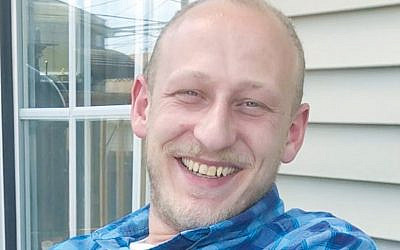 Two pictures of him dress my office. One picture is of his glittering smile and the other holding his Mag gun in uniform. He is hot, sweaty, and weary from an army assignment. He flourished in this structure. His physical body growth and prowess fortified him mentally. My boy was smart and accomplished; he was a biochemist, coauthor of scientific articles, songwriter, storyteller, and soldier. His diplomas hang on my office walls. Memories link his mind and body in this sanctuary.

His oldest brother put it best. “King David is renowned for winning one battle defeating Goliath. My brother fought and won 13,000 battles over the course of his brief life. He won a battle a day, every day, living another day. Then he lost one battle.” Alone in a room, with a house full of family, he succumbed and was gone.

People brought us books to read about Jewish life and death. My wife and I, like our son and his siblings, are voracious readers. I soon stopped reading these books. They offer me no comfort; worse, they cannot explain an inexplicable act. How could his mind persuade him to do this horrendous act to his body? I avoid looking for answers. His siblings scolded me until I admitted to friends and neighbors our son took his own life. We give mental health short shrift in the Orthodox Jewish community. Then the fearful subject came up. Can we bury our son in a Jewish cemetery? Will the burial society refuse his body? We buried him in Israel.

Burial society members who prepared his body opened the grave, laid him to rest, and prayed over him were reassuring and comforting. They handled his body and treated survivors with sensitivity, respect, and utter dignity. Their members were the link between mourners and Heaven like a cantor to the congregation.

My wife frequently cries during her morning prayers. She gains comfort from videos about the afterlife. My morning prayers take less than half the time they used to take to finish. I read nothing about life and death, the afterlife, Heaven and earth. I stopped looking for explanations.

Recently, I received a book from The University of Pennsylvania Press. The company sent me The Jewish Body: A History, authored by Robert Jütte with translation by Elizabeth Bredeck (2021). It is an encyclopedic survey of the history of the Jewish body. Jütte devotes nine pages to “Suicide” and “Belief in Resurrection” in the seventh chapter, “Mortal Body.”

The book is not a philosophical or religious tome. It’s a history book about the dominance of the Jewish body at the core of Jewish Law, customs, traditions and social life. It is packed with fact-backed information relying on original religious texts, rabbinic and kabbalistic sources, observations from Jewish medical experts and anthropologists, political and historical documents.

“According to Jewish traditional thinking life is not owned by human beings, it is only on loan from God.” Suicide is a “desecration of the name of God.” The act is unacceptable and has social consequences. Judaism forbids families to mourn a suicide in the ways we mourn other deceased. But survivors of suicide, especially when the death is a child, have to contend with additional layers of sorrow. I am still overwhelmed with mixed emotions, suffering rage, pain, bewilderment, and relief.

But mourning is meant to comfort the survivors. Mourning has little to do with the soul’s place in heaven. So, Jütte’s citation of sources helps me understand when I read the declaration that oppressive restrictions do not apply to the self-inflicted death of “immediate family members, who should be buried with the mourning rituals required of survivors.” Someone discovered dead from willful suicide but who made no announcement to take one’s own life, “He is treated like any other deceased person and buried with honor.”

Jütte cites the Kitzur Shulchan Aruch 201, that “Without proof to the contrary, a man is not presumed to be wicked (having stolen a life from his Creator).” Jütte points out we ignore that Samson, Saul, Ahitofel, Zimri, and other Jews committed suicide throughout the ages.

The body is the sanctum of the soul. Rabbis and kabbalists hold the soul reflects the attributes and emanations of the Almighty. The body is created in the image of God. To harm the body by self-inflicted death is stealing from God. It is the Jewish person’s obligation to maintain the body in an excellent state of health and to repair it when sick. Mind and body are one. Our son regularly met over the years with a therapist and psychiatrist to heal. There is no shame in that.

The Jewish Body is an important contribution to understanding how Judaism and secular thought weave together life boundaries. It covers every aspect of the centrality of the body in Judaism and Jewish life. The author laces religious learning with diligent scholarship in 27 pages of notes and a bibliography 36 pages long. The book contains a sampling of pictures and drawings to highlight his points. Every institution where learning is happening should have a place for the book. His Table of Contents is not as yielding about the vast subjects he covers as the Index.

The chapter “Biological Body” is especially informative. Jütte explores how attitudes about the body differ Jew from non-Jew. Antisemites use Jewish body characterizations to enhance the image of the Jew as a mean-faced, greedy money-grubber. Every part of the body is fodder for racial stereotyping and political attacks: the nose, lips, hair and skin color, beard, the smell of a Jewish body. The Jewish body image changed when Zionists encouraged Muscle Jews in the 19th century and the IDF became idolized.

Jütte’s discussion about “(Un)Equal Treatment of the Sexes” is done with exceeding balance. He reports hegemonic masculinity dominating Judaism is eroding since the Enlightenment and the onset of activist pluralism, demands diversity, inclusion, and equity. For example, the Western Wall battles are predominantly gender-specific: Women of the Wall versus male yeshiva students. The issues may be over differing religious interpretations or power and control, but kerfuffles on the ground are all about Jewish body types.

What makes a book the book people need and want? It sparks the mind and speaks to the reader. The Jewish Body does that for me when more esoteric books leave me flat. My interest at the moment the book arrived was trying to get over the anger at God and my son for his unliving. A lot of wreckage is left behind.

The media pay increasing attention to suicide. Suicide is fallout from bodies confined in lockdowns. Suicide outpaces deaths from operations in the military. The body is the influencer of Jewish ideation. It affects the education curriculum; the body influences lineage, economic, legal, political judgments, and the organization of society. Reading Jütte’s book offers a deep understanding of its sanctity and how body and mind link. Don’t let one betray the other.

About the Author
Dr. Harold Goldmeier manages an investment firm, is a former Research and Teaching Fellow at Harvard University, and teacher to international university students in Tel Aviv. He served in the administrations of US governors and the Surgeon General, works as a commerce and industry consultant, writer, and public speaker.
Comments