For those unaware, Simona Weinglass is the same reporter who penned the epic ‘Wolves of Tel Aviv’ exposé that essentially kickstarted the slow and ongoing meltdown of the disgraceful, deceptive binary/forex industry. 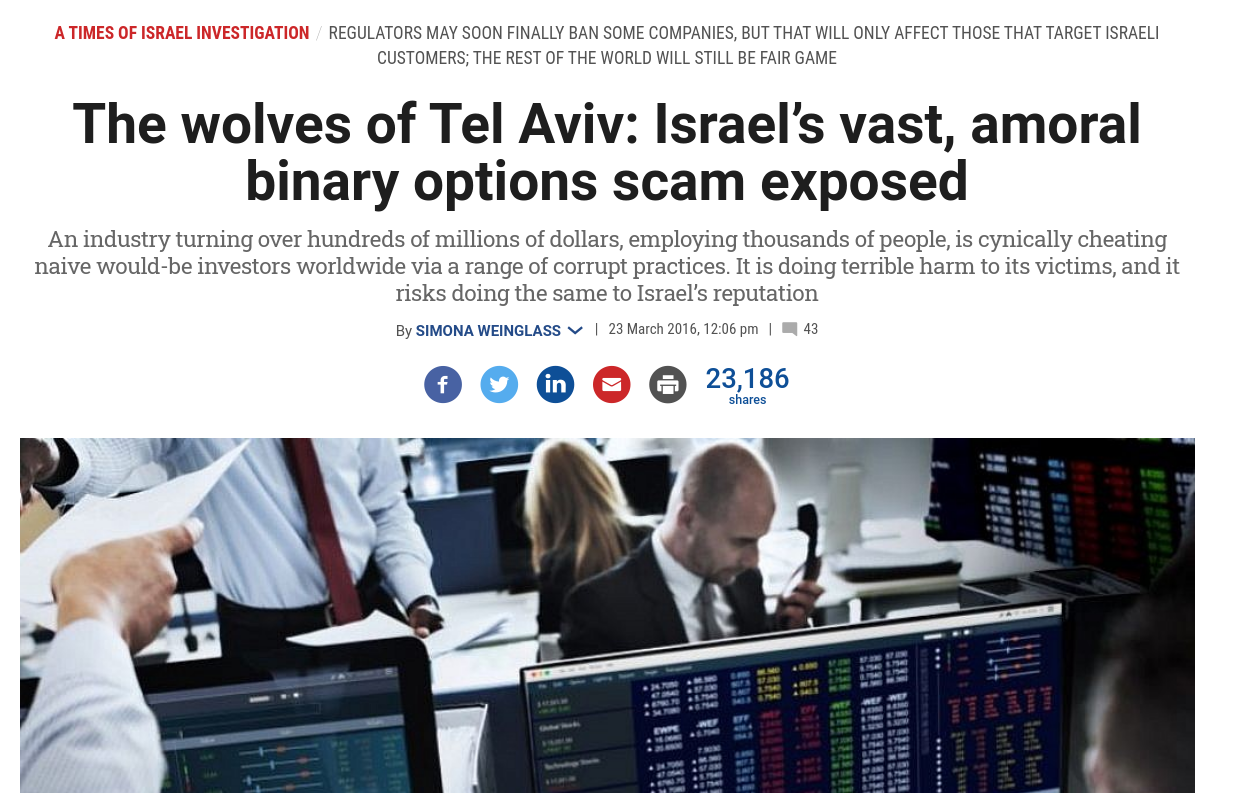 The Wolves of Wall Street. Via Photo: Times of Israel.

Beyond kicking off legislative action here in Israel, the piece has been shared more than 23,000 times at the time of writing — indicating that it also started an important conversation that, when it comes to Israeli high-tech, “all that glitters is not gold.”

I can imagine that some might view airing Israel’s dirty economic laundry with a jaundiced eye.

I would argue that Israel’s authorities have proven themselves unwilling to fully crack down on some of the dubious industries they are home to. And that without the uncomfortable light of international media coverage, it is doubtful that anything would have changed at all.

For instance, it has been the FBI — not the Israeli authorities — that has led the charge against prosecuting the binary/forex lynchpins who were the masterminds of the type of (sort of) unsuspecting olim operatives that Weinglass sourced comment from. (According to one immigrant worker quoted in Weinglass’s piece: “I was told to tell people I had years of experience in the market, that I had studied at Oxford and worked for the Bank of Scotland.”)

Judging by the posts on Israeli job boards, it would also appear as if efforts to completely stymie the industry here have been unsuccessful. This is unsurprising.

Apparently buckling under industry pressure, the law that eventually passed the Knesset was a watered-down version of what it was originally intended to be. Unlicensed marketers of other financial products — namely forex — were allowed to continue operating.

In response to the legislation, many online crooks moved operations overseas on paper. Given their proximity to Israel, Cyprus and Malta remain popular destinations. While other shifted into fields with comparable potential for mischief, particularly the cryptocurrency space.

It is sad, but not unexpected, that it was the US that ultimately succeeded in landing the first major prosecution of a binary lynching and not Israel: Lee Elbaz was sentenced to 22 years in prison by a US court last December. Most of binary options’ victims were based overseas, although the activity emanated from Israel. But — thanks to the Times of Israel’s dogged investigative work — Israel had sent out a clear message that it was not going to allow its territory to be used as a base for overseas scams.

My Encounter With Israel’s ORM Industry

Online Reputation Management (ORM) is a field with both legitimate and fraudulent potential. Image: Pixabay.

Simona’s deserving target today was the dubious field of Online Reputation Management (ORM) which also has a substantial presence in Israel.

Despite the impression which the coverage might give, ORM is not inherently  a bad industry.

ORM can be used by those with excellent reputations to proactively manage what appears about them on Google, the great arbiter of five second public opinion.

Because it’s involved in managing reputations, however, ORM is a field that is rife for abuse — and many choose to chase after the easier and more lucrative money that lies in helping fraudsters and scammers to shield their misdeeds from the first page of Google.

Thus, while not inherently toxic, the field has unfortunately become a magnet for “black hat” operatives who exploit the same tactics that those looking to proactively preserve good reputations use in order to keep the doldrums of “bad news” from blowing over their personal reputations.

I should know. I got a brief glimpse into the field through my freelance work. 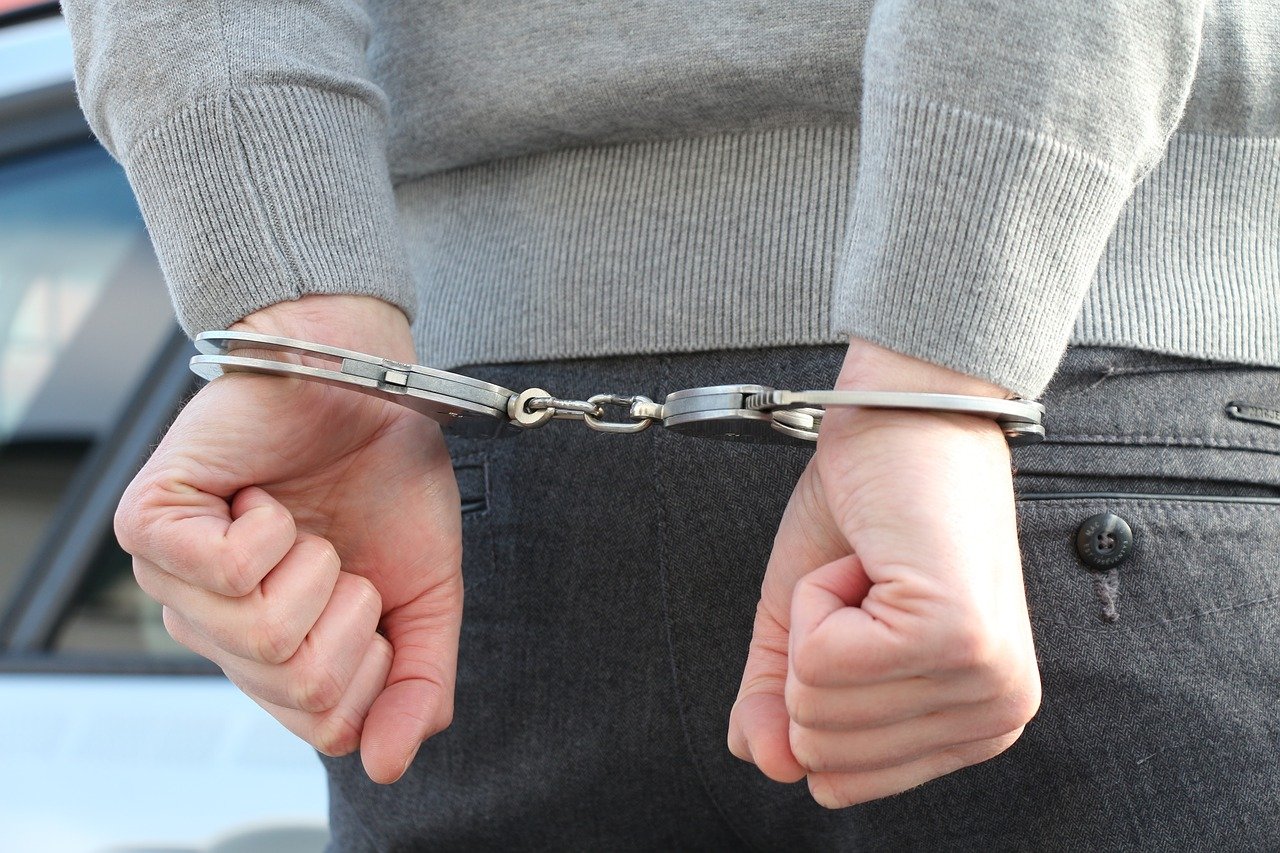 A man being arrested. Source: Pixabay

“Our Client Has Some Bad Press”

I’ve been working as a freelance writer for five years, although it’s only been my full-time income for two and a half of those years. And, like most freelance writers, I’ve gradually ascended through the client ranks.

The low-point of my first year in business was probably writing a description for a clickbait video about the various ways in which one could microwave bacon. Written from an office in the epicenter of Jerusalem. By a Jewish author who attempts to keep kosher.

A less obvious one that sneaked into my client list via a referral was a content marketing firm that purported to be based in Cyprus. Which made it strange that the founder seemed to have never heard of Larnaca and had an Israeli cellphone number.

The client approached me with a quandary.  It began with the wonderful euphemism that their client had unfortunately accrued some “bad press.” What had in fact transpired was that the firm’s client had just been arrested — oh my! — but, ever the industrious duo, they had just pivoted into a new line of business.

In retrospect, it was woefully stupid of me not to stop my engagement with this client right there and then. DSR Ghostwriting, I should state, is not generally in the business of promoting the newfound commercial interests of suspected (now confirmed) fraudsters. Although equally, doesn’t everybody deserve a second chance?

Or perhaps, rather than being naive, maybe I was simply intrigued by the brief. After all, it offered far more mystery and intrigue than penning another video description about how the high setting was the best option to get your bacon extra crispy.

The brief was for a series of five articles. It explained — without mentioning the fact that it was a barefaced fiction — that the two unlucky jailbirds were “investing heavily” in blockchain. Yes, I had heard of it. The interesting thing was that, despite my best online sleuthing, there was no mention of an association between the misfortunate Israelis and this new technology.

The brief also stated that the articles were to be written from different “tones of voice.” Unknown to me, but apparent later, that meant that the articles were not in fact works of ghostwriting for the unlucky client — incarcerated on some far-off tax haven. Rather, they would be spun out onto various fake news websites that the client illicitly operated and attributed to fictitious reporters who were disseminating completely fake news about the duo’s investment in blockchain. I discovered these intriguing details retrospectively through simply running “exact match” searches on the illicit content that I had helped author.

A week later, while paying courtesy calls, I met my client at a swanky cocktail bar in Tel Aviv which curiously sounded as if it was a coffee shop. The good thing about meeting clients in person — I’d call this Client Management 101 — is that you pick up tidbits which the client would never put in writing or say over the phone.

Appearing somewhat inebriated and clutching what might have been one of many beers that evening (I’m not sure coffee was even on the menu) the client confidently confided “just write anything, mate. It’s total b***cks.”

An Industry Built On Lies

After learning that my Cyprus-base client in all likelihood lived in Israel and wasn’t visiting home on a business trip, and that she was presiding over a marketing operation that involved writing complete fiction for convicted fraudsters (at this point I was asking myself: is anything true?) I pieced together a little bit more about what Online Reputation Management (ORM) was and how it all works. I should qualify that with: black hat ORM.

Putting my experience together with Simona Weinglass’s reporting today, it would appear that Israel is home to a cluster of ORM companies that play the decidedly black hat side of the game.

Having become acquainted with the methodologies that some operators use to promote fake content and attempt to artificially suppress real news carrying negative sentiment, I would venture a guess at the number of such operatives based here as a few. And to clarify: I am not alleging malfeasance against any company in particular.

Naturally, I can’t go into detail about who my former client was — or who their client was, the person I was inadvertently creating ORM articles for.

All I can say is that while nothing appeared on Google about their newfound proclivity for investing in blockchain that I was writing about, there was plenty of coverage from top-tier media about their arrest for not reporting million of dollars of profit hidden in tax havens.

The two at the center of this scandal — like the company helping them (and note: the company wasn’t mentioned in Simona’s coverage) — were both residents of Israel.

By utilizing the services of an ORM specialist to create fictitious articles about their investments in Blockchain, the pair were hoping to divert the narrative from their arrest and push the damning content about their arrest on tax evasion charges further down the Google rankings.

There’s much more to the machinations of the ORM companies than this. But these are the essential details. At least as I’m familiar with them.

The black hat ORM machine that proliferates in Israel is another dirty industry that does Israel’s international reputation no favors. The world, olim and the State of Israel would all be better if it didn’t exist here.

It is one of several — and it is great that the TOI is lifting the lid on these industries.

Now I must go. Thankfully, I have more legitimate work to attend to.