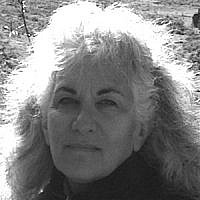 The Blogs
Idele Ross
Apply for a Blog
Please note that the posts on The Blogs are contributed by third parties. The opinions, facts and any media content in them are presented solely by the authors, and neither The Times of Israel nor its partners assume any responsibility for them. Please contact us in case of abuse. In case of abuse,
Report this post.

I met my Great-Uncle Nachum for the first time the other day. It was a modest plaque on the wall of the synagogue on the campus of the Jerusalem Institute for the Blind acknowledging his founding of the school in 1902. And last night, a former student from the school lit a torch, its representative at the official ceremony kicking off Independence Day celebrations.

People ask what I am doing now that I am retired from Israel Radio so I say among other things, meeting my family for the first time.

When I came to Israel 44 (!) years ago I thought I was alone. It has taken me those four decades to discover the family I never knew I had, here in the Jewish Quarter: my great great grandfather Rabbi Moshe and grandmother Malka who came to Eretz Israel from Kovno in the mid-19th century after a local constable cut off my relative’s side curls; Benzion, my great grandfather and Nachum, my great uncle carried the Nathanson name from Jerusalem to North America in the 20th century: hundreds of descendants; most of them now living from Toronto to Detroit to Los Angeles and Seattle. A typical Diaspora Jewish family.

But before Uncle Nachum left pre-state Palestine for Canada, he distinguished himself as a businessman, a community leader and publisher. I have learned that he founded the school after a blind youth was trampled by a camel one morning outside the Jewish Quarter shop he managed for his father in law. Rushing to help the boy he asked him why he was not in school and was told that there was no place for blind children.

The rest is history, and it is my family’s history. What was started as a small school by my Uncle Nachum together with the prolific writer and scholar Rabbi Avraham Lunz who went blind in his twenties, is now a sprawling campus in Kiryat Moshe. It is their legacy that the school is a modern institute providing a home and school for hundreds of blind youth from age six to 21 including a sports center with pool, a library and social activities available to the entire community of the visually impaired in Jerusalem and beyond.

During my visit, I saw blind adults playing chess, some high school age students outside talking among themselves, young girls in a model kitchen sitting at a table learning how to manage zippers and buttons. There were teachers and aides quietly guiding children, some of whom prone to outbursts or erratic behavior, across the grounds safely to their next class or activity.

According to Culture Minister Miri Regev this year’s recipients were chosen because of their love of Jerusalem and their contribution to the city.

I’ve been privileged to broadcast to the world from Jerusalem for almost four decades. I’ve planted roots here and raised a family but I am humbled and amazed at what I am discovering. I now know that when my family, now three generations, has gathered in Jerusalem for seder, reciting the story of the exodus for generations to come, my relatives did the same thing 100 years ago only a few kilometers from here, reciting the same prayers and singing the same songs.

So when Indian-born Dina Samte, a member of the Bnai Menashe community, who came on aliya in 2007 from India, lit that torch for the school, I was there with her in spirit in the name of the school’s founder and his descendants

I am the proud and yes, stunned, great niece of Nachum Nathanson, a man who brought light and hope to this city for blind children, a beacon which continues to shine and illuminate a path of hope and care for hundreds of Israel’s blind and their families.

Oh and did I mention that Nachum’s son Moshe became a great cantor and is credited by most with composing the lyrics to Hava Nagila while a student at Jerusalem’s Etz Haim yeshiva at the age of 12? But alas, that is a story that will have to wait for another time.

About the Author
Idele Ross worked as a broadcast journalist with Kol Israel's English Service for almost 40 years. She is currently researching her family's roots in pre-state Palestine.
Comments