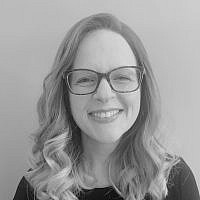 The Blogs
Erica Pelman
Apply for a Blog
Advertisement
Please note that the posts on The Blogs are contributed by third parties. The opinions, facts and any media content in them are presented solely by the authors, and neither The Times of Israel nor its partners assume any responsibility for them. Please contact us in case of abuse. In case of abuse,
Report this post.

I’ve only barely tasted the pain that is possible. The longing. The sadness. Looking at the test wanting, wanting, wanting a second line. Wanting a demonstration that I am not all alone — that someone very, very small is growing in my belly.

Given that my mother had four kids after thirty, I never thought for a second that getting pregnant would be anything but easy. This naïve confidence  turned out to be false when, in my late twenties, we started trying to conceive.

A number of months and negative tests later, I found myself in Shiloh in Israel. A confident archeologist turned tour guide points to a dusty spot on the grounds where the ancient Israelite tabernacle once stood. This is where Hannah prayed, he says. She wept here, moving her lips, yearning to have a child. At first, the High Priest Eli thought she was drunk. Ultimately he realized that her prayer was the holiest of holies.

Standing in her dusty spot, I joined my tears with hers. At least I wasn’t alone. In synagogue on Rosh Hashannah, we read both about Hannah and Sarah, their barrenness and their babies.  How many of us before the Ark wondering whether the “Book of Life” will include a new baby for us this year?

I can think of no natural power than any human has — man or woman — more magnificent than a woman’s potential to grow a new human being inside her own body.  Yet is there any other power that simultaneously can make us feel so out of control?

The very power of pregnancy paradoxically creates acute and painful vulnerabilities… When we look at another’s bulging belly and painfully wonder “why not me?” When a hard-fought-for pregnancy is ripped from us through miscarriage.  When we look at the pregnancy test in disbelief and fear because “this was not the plan”.

A few months after Shiloh, I found the holistic medical support I needed to become pregnant. Turns out that after I gave birth, my heart began to beat outside my body. My life overflows from the profound love and unceasing wildness that my boys bring.

My relatively brief taste of infertility came after one of my closest friends struggled with an unplanned pregnancy crisis. At the time, I thought how opposite the problems are: she had cried at a positive test, I was crying at a negative test.

But with miles of life lived behind me,  they no longer seem to be so different.

Whether a woman is dealing with infertility or an unplanned pregnancy, if she is to have a  baby, she will often need a tremendous amount of social and emotional support and, sometimes, financial resources. Her love for her future child can give her strength during the vulnerable journey- but she needs lots of unconditional love herself.

After my friend’s crisis and my own journey to become pregnant, I joined with a small group of women in Washington, DC to found In Shifra’s Arms.  While other organizations are doing tremendous work with infertility, our grassroots effort In Shifra’s Arms leads the way to reach out to Jewish women who are pregnant and vulnerable.

We’ve heard from women who are married, single and divorcing. Women with doctorates (yes, more than one) and women without a college degree yet. Some are six weeks pregnant, some are six months pregnant. Some are considering ending the pregnancy, many are not. Often they have been abandoned by the father or have a rocky relationship with him. About one fourth of the time the relationship is outright abusive. Other times the relationship is okay but finances or other life circumstances are difficult.

If she wants our help to move forward, we offer support  during the entire pregnancy and the year after birth.  This has included getting a volunteer to help a divorcing mother prepare her home for her second or third child,  helping a single mother pay for diapers or helping a returning college student with small grants for childcare when she goes back to school.

I write this to remind you that as we look at each other this Yom Kippur, some of us will be longing to be pregnant, some of us will be worried that we’re pregnant. All of us are on a journey which requires great strength through our vulnerable and broken moments. Every one of us will be in need of love and compassion.  Let’s pray together that we may all be sealed in the Book of Life.

About the Author
Erica Pelman is the Founder & Executive Director of In Shifra's Arms (ISA). Prior to creating ISA, she worked at the US Department of Labor for seven years on workforce development programs. She is a graduate of the University of Pennsylvania and lives in Rockville, MD with her husband and their four children.
Comments