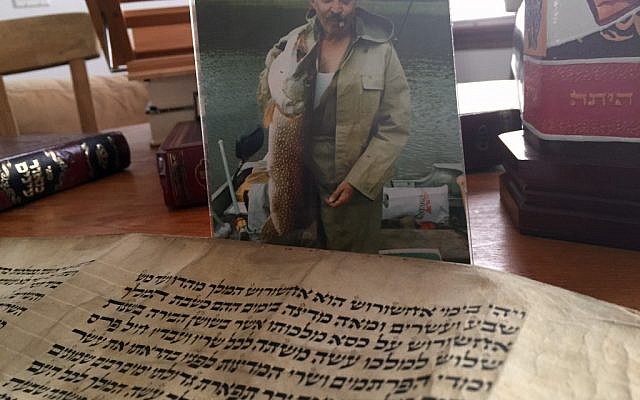 Beneath the pile of dusted books I feel something different. It has a distinctive and even familiar feeling to it. It seems to be of significance, maybe old run down leather. My arm is completely submerged in the  cardboard box, reaching around for any other clues that my hand can find. “What could my Zayde have been hiding in here?”

It’s a humid summer day in Des Moines Iowa, a few months after my Zayde passed away. The house still smells of his tobacco pipe. Like I did when I was a kid, I’m roaming around the house peeking into closets and cabinets. He always had enough chazari and chachkies laying around to keep one engaged, especially a curious little boy.

I try to pull this weirdly shaped object out from the bottom of the box but the weight of the books make it challenging. Each book removed left me feeling like I was traveling deeper and deeper into history, like an archaeologist digging away at mounds of dirt. The first book I opened up was a copy of the Zohar, the gateway into Judaism’s mystical tradition. The all black cover, loose binding, and brown stained pages made the book’s appearance just as mysterious as its esoteric content.

My Zayde was far from a mystic, although he always believed that Jews had some sort of magical connection with each other. He never could get over his experience liberating the Wöbbelin camp and the memory of the two Jewish former inmates he encountered. “When I said that I was also Jewish they threw their arms about me and kissed me. It gave me a strange feeling which I’ve never before experienced and can’t describe very well” he wrote his brother in May 1945.

I go back into the box and pull out a much smaller, but just as fragile book. I sneeze again from all the dust. The book’s title, Nitei Nosson, is the only wording on both the front and back. I have never seen a cover without the author’s name, but the title seems so familiar.  I open the book with caution, but I cannot help my hand from shaking. Turning to the first page, I hold my breath as the page feels more like a thin sheet of ice, at any moment it could all break apart. I know this book though, my memory slowly awakens. It was authored by Rabbi Naftali Hertz Zeichik, my Zayde’s Zayde. I remember hearing tales about him from my youth. He was a Talmudic genius and spent time learning at the famous Volozhin yeshiva.

My Zayde was not a rabbi nor a sage, but he was an extremely pious Jew. He was always the first to be called by the synagogue whenever they were short for a minyan because they knew he would step in. He also took care of the cemetery for his synagogue, arranging plots and making sure the grounds were kept up. These were true acts of kindness, with no reward or fame.

“Jonathan!” my Mom yells out. “It’s dinner time! Everyone is waiting for you.”

With all the books removed, I can finally begin to see what I had so desperately been searching for. My eyes begin to water up as memories come crashing back. Sitting on his lap in the Sukkah with rain falling into our soup, being placed on his shoulders as we danced with the Torahs on Simchat Torah, and just holding his hand as we walked to Shul on a beautiful Passover morning. I really loved my Zayde so much.

I fight back the tears and reach down. It’s an old scroll all wrapped up. It looks old enough to be in a museum. I open it up and read the opening lines.

“And it came to pass in the days of Ahasuerus…”

Purim is not just a day. It is a state of being. Today we celebrate our ancestors and their countless miracles of survival. Haman comes and goes, but the Jew is eternal. We keep marching through time.On this Purim, this old Megillah is being dusted off and will be read again — echoing the sounds of Purim from a lost world. As a parent now I wonder what I will leave in my box. What treasures will I leave hidden away for the future?