Under the Trump administration, U.S. security policy towards Europe appears to be taking on a new trajectory. One of them is the evolution of a “collective defense” concept in NATO to one of a “hub and spoke” model similar to East Asia.

As Hans Kundnani from the German Marshall Fund’s Transatlantic Academy pointed out, in the context of Trump’s demand that NATO members fulfill their pledge to spend 2% of GDP on defense and the deployment of NATO troops to the Baltic states and Poland, “What may be emerging is a system of implicit bilateral security guarantees between NATO countries, centered on the United States.”

In January, U.S. Armored Brigade consisting of 4,000 troops arrived in Poland—a NATO member that spends more that 2% of its GDP on defense. In Latvia and Lithuania that spends roughly 1.5% of GDP on defense, non-US troops from NATO will be deployed.

This thus resembles the “hub and spoke bilateralism” in East Asia—centered on security guarantee with individual countries such as South Korea and Japan—as Washington appears slowly moving towards bilateral deals from multilateral structures.

While NATO began with the right intention to provide a shield for postwar Europe to recover and not fall prey to an expanding Soviet empire, over the past decades, the organization seemed to have lost its way.

As a legacy Cold War institution, NATO retains a built-in bias against Russia and is focused on conventional warfare.  However, in an era when the mission defines the coalition and not the other way around, NATO’s mission of collective security against a conventional threat is ill-equipped to address new security challenges such as terrorism, refugee crisis, conflict prevention and resolution.

Moreover, U.S. is no longer the wealthy nation it once was that could provide defense welfare to support Europe’s post-war reconstruction.  It is also unjust to continue placing a heavy burden on struggling American taxpayers to underwrite 75% of NATO budget for many wealthy European states, while U.S. economy is flailing with its own $21 trillion debt burden.

As Doug Bandow in a 12 September 2016 Foreign Affairs article argued, “Alliances should be a means to an end rather than an end in themselves, and in this case, that end should be to increase US security.”  Unfortunately, it seems over the past years U.S. alliances are actually decreasing U.S. security—especially NATO member Turkey.

Turkey and the erosion of NATO as a value-based alliance

Despite repeated mantras from the U.S. and other NATO members that Turkey is a reliable ally, sadly the secular Turkey that used to be an ally no longer exists.  Since 2003, Turkey under Erdogan and AKP has been transforming into an Islamist and totalitarian country that stands in opposition to NATO’s professed values of democracy, human rights and rule of law.

Moreover, it has betrayed the U.S. and supported America’s enemies. As confirmed by a German intelligence report and another by Columbia University, in the past years Ankara has been acting as an umbilical cord to feed al Qaeda and ISIS with foreign fighters, weapons, and market for its oil. Indeed that is what provoked Erdogan’s regime to ban Wikipedia recently, for its refusal to remove contents linking Turkey’s role in promoting jihad in Syria.

As such, despite recent NATO assurance to President Trump that the military alliance will begin to reorient its mission on counter-terrorism, there remains skepticism.  It is problematic to declare the alliance is engaged in counter-terrorism when one of its own member has been complicit in fomenting terrorism in Syria.

With Turkey sabotaging U.S. anti-ISIS efforts in Syria and Iraq, and repeatedly bombing Kurds who serve as the spearhead force for the coalition, this has prompted outrage by pundits and U.S. lawmakers. The Pentagon also slammed recent Turkish airstrikes that risked the lives of American troops working with the Syrian Kurds (YPG) battling ISIS. Now, there is a halt to the momentum on the Raqqa offensive as U.S. troops are deployed to Syria-Turkey border to stop Turkish attacks, with Russian troops doing the same in Efrin.

Meanwhile, Erdogan is steadily populating northern Syria with Turkey-trained Islamist militants-cum- security forces. Chanting and hailing Allah, Erdogan and Turkey, a batch of 450 troops deployed to Jarablus in January 2017, the first of some 5,000 security forces Ankara is training to occupy northern Syria as part of Operation Euphrates Shield launched in August 2016. 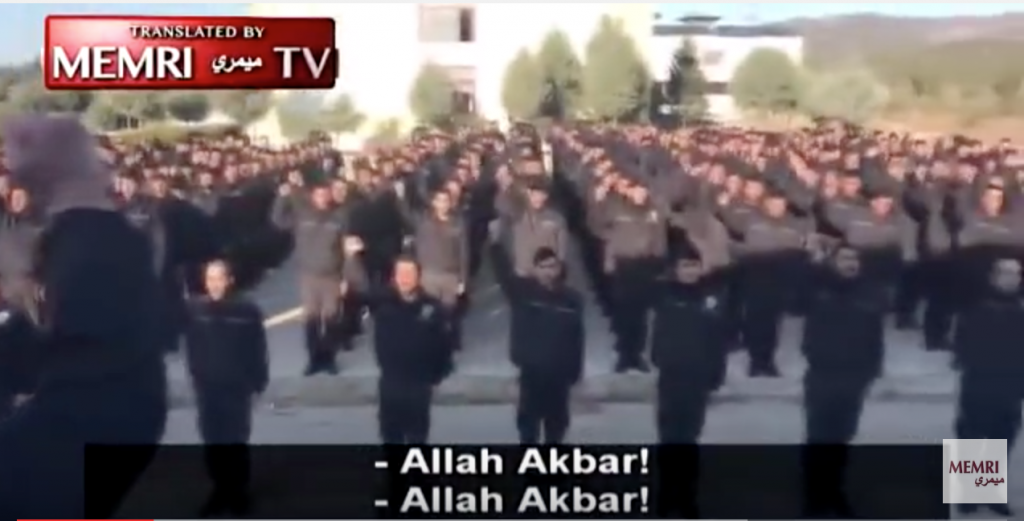 Coordinated with pro-Turkish Syrian rebel jihadi groups including the Turkmen Sultan Murad Brigades, the August operation in Jarablus appears to be part of Ankara’s larger plan to annex northern Syria.  As this author previously reported, on 5 August 2015, Turkish newspaper Takvim featured a map of Turkey’s proposed buffer zone that includes Aleppo, Idlib and the north of Latakia to be under Turkey’s control as an eventual 82nd province. 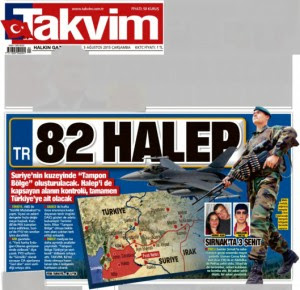 Now the question facing President Trump in the upcoming May 18 meeting with Erdogan and the May 25 NATO summit is, will U.S. and NATO support Erdogan in his neo-Ottoman empire building?

Hub and spoke for Europe?

Thus, NATO currently is in disarray, when Washington has to confront a NATO member to stop attacking U.S. allies, while Turkey threatened to attack American soldiers in Syria.  This in turn has provoked some observers to muse whether Washington and Ankara would invoke Article 5 against each other, and is all the more reason why it is unrealistic to expect that American taxpayers—the main source of funding for the alliance—would continue to underwrite an organization that seems to be undermining and not furthering American security.

So long as NATO member Turkey persists in degrading anti-ISIS efforts and hold American and international security hostage to its own agenda, the alliance will continue to lose its credibility and moral legitimacy on the world stage.  Absent NATO reform on defense expenditures and clarification on the alliance’s mission in the Trump era, European security appears likely to transform into an East Asian hub and spoke model.