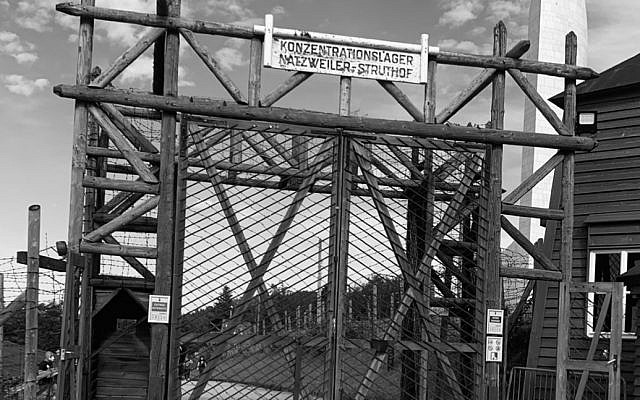 On the grounds of the former Natzweiler-Struthof concentration camp stands an annex of the former Struthof Hotel, in which the Nazis converted a former cold storage room into a gas chamber in 1943. It was initially intended exclusively for criminal human experiments on prisoners. On behalf of the anatomy professor August Hirt, camp commandant Joseph Kramer, with the support of some SS men, also murdered 86 Jewish men and women there in August 1943.

The building, which for a long time played no role at all in the memorial culture and could only be visited for a few decades, has now been renovated. A permanent exhibition will officially open in it on November 25, 2022. On this upcoming occasion, we interviewed Hans-Joachim Lang, who has been researching the crime against the 86 Jews for over 30 years. He identified the 86 people, published a book about it in 2004 (“Die Namen der Nummern”), which has been available in a revised version in French since 2018 (“Des noms dèrriere des numéros”). Hans-Joachim Lang is a German journalist, historian, and Adjunct Professor of Cultural Anthropology at the Ludwig-Uhland Institute for Empirical Cultural Studies University of Tübingen. From 2016 to 2022 he was member of an international historian commission at the Université de Strasbourg, which researched about the medicine faculty of the Reichsuniversität Strasbourg 1941-44).

Holocaust denial started in France mostly in the very beginning of the 80’s with Robert Faurisson’s book refusing the veracity of Josef Kramer testimonies about the Struthoff gas chamber, before being used again by Mahmoud Abbas in his thesis. Did you find particular resistance inside the french institutions more than in germans ?

Hans-Joachim Lang : The question can be answered differently at different times. My research on August Hirt goes back to the mid-eighties, when I learned of Hirt presence at the University of Tübingen. I live in Tübingen, am interested in history, and worked full-time as an editor for a daily newspaper. On the subject of Hirt, I initially visited only German archives. Since the mid-nineties, I have been doing research, first to identify the names of the 86 people murdered in the Natzweiler-Struthof concentration camp, then also to learn something about their biographies. I have never encountered open resistance. However, I sometimes had problems with the disinterest of archivists and individual university members, as well as with the rigid archival laws, especially in the French archives. At present, however, I encounter helpful and open-minded archivists and university members everywhere – in France as well as in Germany.

During your researches for your book, the University of Strasbourg didn’t like to cooperate. Did that situation change after that ?

H-J. L: I have never asked anyone at the university to cooperate with me until now. I have asked questions only sporadically. 23 years ago – in the (wrong) assumption that the university had its own archive – I asked the university if there were any records on August Hirt. I did not even get an answer. And when in 2005 I asked the then director of the Anatomical Institute why there was no memorial plaque there commemorating this crime, to the answer I got:  “The walls are not guilty”. On the other hand, in November 2005, Prof. Christian Bonah invited me to speak at the Université de Strasbourg on the occasion of a conference Nazisme, Science et Médecine. With five of the speakers at the time, I was a member of an International Historical Commission at the Université de Strasbourg that studied the history of the Faculty of Medicine at the Imperial University of Strasbourg (1941-1944) from September 2016 to May 2022. In addition, the Presses Universitaires de Strasbourg published in French my specially revised book: Des Noms derrière des Numéros, identification des 86 victimes d’un crime Nazi. So I cannot complain about a lack of interest in my research on the part of the university in the present.

Have you been invited to the inauguration of the building with the gas chamber, on November 25, under constructions during the past three years ?

H-J. L: The inauguration associated with the opening of a permanent exhibition was originally to take place in the first week of May, the same week in which the final report of the Historical Commission was to take place in Strasbourg. I learned of this only afterwards and by chance, although I had already agreed with the predecessor of the current director exactly five years ago to make a special memento available as a permanent loan for the exhibition, which was already conceived for the first time at that time. It is a Brussels lace blanket from the personal estate of Elisabeth Klein, one of the 86 Jews murdered in the gas chamber. Similarly, the five grandchildren of Alice Simon, also one of the 86 murdered, living in the United States. Their loans are their grandfather’s wedding ring engraved Alice and his watch chain with attached family portraits.

We also learned of the new opening date only by chance and only after inquiring that the memorabilia were not to be on display there. They were intended for a devotional room, about which, however, one must still reflect a year in terms of content before it can be opened at the end of 2023 / beginning of 2024. At the protest of the Simon grandchildren, their memorabilia will now be provisionally included in the exhibition. To their great regret, the grandchildren will not be able to attend the opening because of the date, which is too short for their travel arrangements. The invitation of other relatives was not planned.

Do you find it normal that students and elder people need to pay to have access to the former camp and is that different in Germany ?

H-J. L: I have not thought about it so far, and in response to your question, I did a few spot checks. For example, the memorials of the former concentration camps Buchenwald, Dachau, Ravensbrück, Sachsenhausen generally do not charge admission. I think that is good. However, school groups do not have to pay an entrance fee at the Natzweiler-Struthof memorial either. I personally do not find the reduced entrance fee of 4 euros for young people, students and the unemployed to be excessive.

Isn’t it problematic that the Struthof was named only upon «the déporté-résistant », which excludes still, the fact that it was also an extermination camp ?

H-J. L: Was the Natzweiler concentration camp an extermination camp? In my understanding, extermination camps are those death factories in which Jews, in part also Sinti and Roma, were systematically exterminated using industrial methods. I know that there is sometimes a bitter dispute about questions of designation. First of all, the Natzweiler concentration camp was a German concentration camp on French soil. And one should also know what exactly happened there and in its subcamps: That people died there because of the working and living conditions. That people were murdered there. That medical experiments were carried out on people there and their deaths were accepted. That people, even if they did not die, suffered psychologically and physically. The fact that the European resistance is commemorated in the memorial is, in my opinion, correct in principle. It is also correct that it has become one of the focal points of remembrance at this place. Of course, this topic should not obscure the other relevant topics beyond recognition. However, this is not only a question of designations, but also of good educational and public relations work.

Do you find it strange that both Nicolas Sarkozy and Emmanuel Macron refused to visit the camp of Struthoff, after all other French presidents did, and how do you explain that ?

H-J. L: The fact is that these two presidents were not there. But did they really refuse? Wordlessly or argumentatively? Without knowing the background, I cannot judge on this. And in this case, I don’t feel asked as an European, what I want to be primarily, but as a German European. And as such, I would prefer to keep a low profile here.

What can we learn from the 500 pages report of the commission you worked with ?

H-J. L: One can learn from this that the time was overripe to devote united research power to the subject of medicine at the Reichsuniversität Straßburg. The large volume of the report testifies to a multitude of until now unknown facts. Not least thanks to newly discovered documents, the situation of the medical faculty of the Reichsuniversität in the years 1941 to 1944 can be presented far better than before. This also concerns the connections with the Natzweiler concentration camp. The commission attaches great importance to the observation that there is still much to be done even after the completion of its work. It therefore recommends that the university set up a research center to institutionalize further work in this way. And it advises that the present results be incorporated into an active remembrance policy.