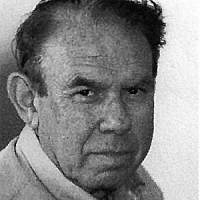 The Blogs
Jerry Barach
Apply for a Blog
Advertisement
Please note that the posts on The Blogs are contributed by third parties. The opinions, facts and any media content in them are presented solely by the authors, and neither The Times of Israel nor its partners assume any responsibility for them. Please contact us in case of abuse. In case of abuse,
Report this post.

It is a story of closeness and cooperation between Arab and Jew in a location that is only a few kilometers away from the tragic scene of the kidnapping and murder by Hamas terrorists of three Israeli teenagers in June. Because it is an intimate story that involves only a few people and does not have elements of dramatic clashes or calamities, it is not the kind of tale that constitutes what we ordinarily call “news.”

I learn of the story as I speak with Tamar Heksher of Gvaot, a tiny village high in the Gush Etzion hills, south of Jerusalem. Tamar, 50, and the mother of nine, is the director of Sadnat Shiluv (Hebrew for workshop and integration)), a program that was founded in the mid-1990s by the devoted educator Noa Mandelbaum.

It provides a rare and challenging learning, working and therapeutic framework in Gvaot for nearly 80 children, youth and young adults, tailored to meet their special educational and emotional needs.

Most of the participants in Sadnat Shiluv (called Sadna for short) did not succeed in finding a solution to their problems in the conventional special education system. They were classified as “retarded,” “autistic,” having “learning disabilities,” or simply “problematic” and faced a non-promising future.

To provide the impetus towards that better future, Sadna operates various special facilities that include not only classrooms but also a therapeutic stables/horseback riding program, a petting zoo, a dairy farm, workshops, athletic fields and other installations, all designed to promote the integration of the students into productive and meaningful lives. Tamar explains their fundamental approach to these children – accepting and loving each child for what he or she has to offer, helping to discover their strengths and weaknesses and treating them with respect.

Tamar takes this amazing attitude to the children under her care and applies it to all human beings, regardless of their race or religion. Each human being deserves respect. Every human being, whether Christian or Muslim or Jewish, is someone who can partner with Sadna and share their love for these wonderful children. Tamar speaks with gratitude and pride of Christian supporters and visitors from around the world who have connected with Sadna with the help of Christian Friends of Israeli Communities (CFOIC Heartland ). “It doesn’t matter to me that these visitors are Christian. They come with such love and such interest in what we are doing. There is a real connection between us and I am grateful for their support and their understanding of our holy mission.”

While Christian support for Jews in Israel is well known, Muslim cooperation is highly unusual. But as we talk about Sadna’s activities with Tamar, we are joined by Abdullah Nagagra, the do-everything maintenance man at Sadna. Abdullah has been with the program for more than ten years and lives in the nearby Arab village of Nahlin. Tamar speaks with warm appreciation about Abdullah: “He puts his heart and soul into this place, just as I do,” she says. “He sees it as his life’s work, just as I do.“ Indeed, Abdullah, 52, himself says, “We don’t look at hours when it comes to work here.”

But there is more than just a close working relationship involved between Abdullah and Sadna. The connection is one of human compassion, one derived from the special G-d- given spirit that is within the hearts of all good men and women, be they Jew, Christian or Muslim. It is an acknowledgment that all are born, as the Bible teaches, “in the image of G-d.”

A few years ago, Abdullah’s wife Rokaya began to suffer from terrible pans in her back. Subsequent examinations showed that there was a cancerous tumor lodged within her spinal column, one that only could be removed without threat of permanent paralysis through delicate surgery. Only two surgeons in Israel were qualified to perform the operation, one at Hadassah Medical Center in Ein Kerem, Jerusalem, and the other at Sheba Medical Center at Tel Hashomer. Abdullah carries health insurance through the Palestinian Authority, but the health officials at the Authority were unwilling to pay the 60,000-shekel (about $18,000) cost necessary, and offered only to pay for surgery by an orthopedic surgeon in a Palestinian hospital, who was not especially trained to perform the risky procedure.

The Jewish staff at Sadna, all of whom earn very modest salaries, were willing to each put in sums of money to cover the cost for Rokaya’s operation at Hadassah. In the end, however, a combination of lobbying efforts by Tamar, plus a woman in Jerusalem affiliated with a Jewish organization active in defense of Palestinian rights, and pressure from Abdullah himself and others convinced the Palestinian health authorities to relent and cover most of the costs for the successful operation by the specialist at Hadassah.

Today, thanks to everyone’s efforts, Rokaya is nearly free of the excruciating pains she suffered for so long.
Other incidents of cooperation are related by Tanar and Abdullah, including the involvement of the villagers of Nahlin in searching for an autistic child who had wandered off from the Sadna sister program in the nearby community of Rosh Tzurim. The lost youth was found at a faraway spring and returned hy an elderly man from Nahlin. In another incident, a nearby brush fire was put out by cooperative efforts by people from Gvaot and Nahlin before firefighters could even reach the scene.

Nevertheless, it is difficult to exclude from one’s consciousness the conflicts that are the antithesis of such personal stories of care and cooperation. When the subject is raised about the kidnap-murder of the three Israeli teenagers that took place so close to Gvaot and Nahlin, Abdullah says, “We didn’t want to believe that such a thing could happen here. Our area is a quiet one, a place where most people work in Israel and are concerned about providing for themselves and for their families. “In the end, he reflects sadly, “all of our people will pay for the crime that was committed.”

The question remains: Can the good people who are in the majority and who want to cooperate with one another and help each other overcome the evil plots of those who want only to stoke the fires of hatred and conflict? Perhaps, but only if the majority make their voices heard abundantly and clearly.

About the Author
Jerry Barach is a retired journalist from the US, who worked as a reporter and editor at a daily newspaper in St. Louis, Montana; as editor of the Cleveland Jewish News; and for the past 30 years, since making aliyah, as foreign press liaison for the Hebrew University of Jerusalem. Following his retirement, he is now serving as a volunteer for the Christian Friends of Israeli Communities (CFOIC)Heartland.
Comments