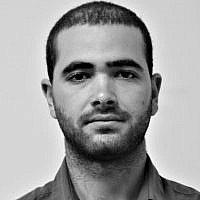 The Blogs
Rotem A. Oreg
Person, Zionist, Liberal, Gryffindor. In that order.
Apply for a Blog
Please note that the posts on The Blogs are contributed by third parties. The opinions, facts and any media content in them are presented solely by the authors, and neither The Times of Israel nor its partners assume any responsibility for them. Please contact us in case of abuse. In case of abuse,
Report this post.

In January 2019, when then-Lieutenant General (res.) Benny Gantz launched his campaign for prime minister of Israel, the first slogan of his party was “no more right and left – Israel comes first”.

Two and a half years and four election cycles later, Benny Gantz didn’t become prime minister, but the way he described Israeli politics – as a system divided not by traditional concepts of right and left – remains true. It remains true in Israel, but it is just as true when speaking about U.S. politics.

The prominent political divide between the parties in the United States is not about left and right, not in the economic realm and definitely not in the foreign affairs realm, but on social issues. On the liberal side of the map, Democrats promote policies that celebrate personal liberty (and hence liberal) – from woman’s liberty on her body to LGBTQ people’s liberty to love who they love. On the conservative side, the Republicans oppose such ideas, as well as other ideas designed to change the way American society is built, such as defunding the police or teaching about Critical Race Theory.

That is also the case in Israel: both Prime Minister Bennet and Alternate Prime Minister Lapid believe that market economy with social safety net is the right approach economically, and while disagreeing on the right solution for the Israeli-Palestinian conflict they elegantly push that issue down their priority list thanks to Palestinian rejectionist policy and the urgency of recovering the economy from the Covid-19 pandemic. Their major disagreements are in the social realm: while not a fanatic Bennet still a conservative when it comes to religion and state issues, whilst Lapid – and the entire political camp he is leading – shares the ideals of the progressive movement.

Gender equality, climate action, public health, religious freedom, LGBTQ rights, voting rights, and the list goes on – all of the above are crucial issues, at the heart of the liberal camps in Israel and the United States alike. Liberals in Israel can and should work to build bridges with like-minded activists in the U.S., not just to tell the liberal story of Israel – an innovative, diverse, vibrant and democratic society – but also to write its next chapter, making it a better place, at the spirit of Tikun Olam.

This is not Pinkwashing or Greenwashing, and definitely not “Israel beyond the conflict”. It is about putting the conflict, as well as disagreements regarding it, in a broader, more accurate context.

Is the conflict the gravest challenge for Israel in general, and for the Israeli-Democrat relations in particular? Probably yes. Can it be solved in the foreseeable future? Probably not. Does it mean that in the meanwhile, Israelis and Democrats, who share liberal values and commitment to the liberal agendas mentioned two paragraphs above, should not work together to make both Israel and the U.S. better places? Absolutely not. More than that: by working together on issues like climate or health, Israelis and Democrats would get to know each other better, and would learn that despite the differences (including differences on the approach to handle and solve the conflict) we have enough in common to make those differences a tactical gap, and not a strategic one.

This is exactly what the Israeli-Democrat Alliance intends to do: to bring together liberals and progressives from both sides of the ocean to work together to promote our mutual agendas. During that, bridges between Israelis and Democrats will be built, serving as a countermeasure to the growing gap between the parties. That in turn is a strategic objective of Israel, as it was defined and declared by Bennet and Lapid alike: the U.S.-Israel relations are just too important to rely just on one party. An Israeli-Democrat Alliance would ensure that won’t happen.

About the Author
Rotem A. Oreg is the founder of the Israeli-Democratic Alliance, an Israeli nonprofit working to build a new Israeli-Democratic relationship, based on our mutual liberal values and commitment to liberal agendas.
Related Topics
Related Posts
Comments