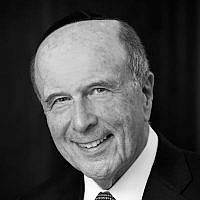 The Blogs
Martin Oliner
Apply for a Blog
Advertisement
Please note that the posts on The Blogs are contributed by third parties. The opinions, facts and any media content in them are presented solely by the authors, and neither The Times of Israel nor its partners assume any responsibility for them. Please contact us in case of abuse. In case of abuse,
Report this post.

Netanyahu wrote in his new book that US President Joe Biden pressured him to end the war prematurely because he was feeling pressure from Congress.

Israel’s anticipated next prime minister Benjamin Netanyahu wrote in his new book Bibi: My Story that during the May 2021 war with Hamas, he came under fire not only from Israel’s enemies but also from a purported friend of the Jewish state.

Netanyahu wrote that US President Joe Biden pressured him to end the war prematurely because Biden was feeling the heat from progressive Democrats in Congress. “Bibi, I gotta tell you, I’m coming under a lot of pressure here,” Biden told Netanyahu, according to the book.

Fast forward to the present. Netanyahu is reportedly coming under pressure from Washington again, this time while there is not even a war on the horizon. Biden, according to Israeli reports, is trying to preempt Netanyahu’s choice for defense minister.

Netanyahu reportedly told Religious Zionist Party leader Bezalel Smotrich, who heads a list that won 10.83% of the vote, that he has been vetoed by the US.

The issue of whether Smotrich is better suited for the finance or defense ministries is beside the point.

America is supposed to be the world’s greatest bastion of democracy. How could the US pressure Israel’s leader to ignore the results of a democratic election with more than a 70% turnout?

Even more absurd are the reports that Netanyahu caved into that pressure from Biden, or at least used it as leverage to avoid giving the independently minded Smotrich a key post that he would rather give to a loyalist, or even better, a yes-man who would allow Netanyahu to run the ministry himself.

The pressure from Washington should have persuaded Netanyahu to do the opposite of what the Biden administration wanted. He should have announced Smotrich’s appointment as defense minister that very day.

Smotrich received the endorsement of the Israeli electorate that pronounced him qualified for a top post by giving his list 14 seats. He is a rising star who should be embraced, not shunned, by the prime minister.

Netanyahu must realize that when the Biden administration fires at Smotrich, its real target is the incoming prime minister himself. By delegitimizing the only possible government in Israel, they are trying to overthrow Bibi before he has even gotten a chance to take the oath of office.

Biden and other top former Obama administration officials never forgave Netanyahu for his March 2015 speech in Congress against the Iran deal. The anti-Israel State Department has had a clear grudge against Netanyahu for decades. The leaks about State Department figures not liking Israel’s election results should surprise no one.

The attempt to dictate the composition of Netanyahu’s cabinet is nothing short of diplomatic revenge and must not be tolerated. It is also not new.

So now their targets are Smotrich and Otzma Yehudit leader Itamar Ben-Gvir, who are both being vilified before being given an opportunity to govern. Along with Netanyahu, they were the clear winners of the Israeli election, even if the Biden administration would have voted for someone else.

The vote empowered the Religious Zionist Party and the religious Zionists that the party represents. The party’s electorate was young, indicating that its support will only grow in years to come.

There are a record number of kippah-wearers in the Knesset. This is the wave of the future, and the Americans cannot ignore this trend nor attempt to suppress it.

Not for the first time, the administration in Washington is guilty of cultural relativism. I don’t see the State Department undermining democracy in Finland or telling French President Emmanuel Macron whom to appoint to his cabinet.

The Biden administration has no right to interfere, and its top officials who have dealt with Israel for years should know that it would backfire. If Netanyahu gives in to the Biden administration now, when the next war takes place, he should not be surprised to see that America will no longer be standing behind him.

About the Author
The writer is copresident of the Religious Zionists of America, chairman of the Center for Righteousness and Integrity and a committee member of the Jewish Agency. He was appointed by former US president Donald Trump as a member of the United States Holocaust Memorial Council. The views expressed are his own. Martinoliner@gmail.com
Related Topics
Related Posts
Martin Oliner