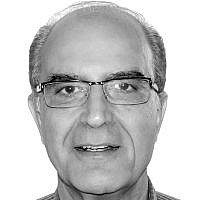 The Blogs
Gil Solomon
Apply for a Blog
Advertisement
Please note that the posts on The Blogs are contributed by third parties. The opinions, facts and any media content in them are presented solely by the authors, and neither The Times of Israel nor its partners assume any responsibility for them. Please contact us in case of abuse. In case of abuse,
Report this post.

Because of many issues, Netanyahu should step down.

The Israel of today under his leadership is a country where Jewish construction in Judea and Samaria has been effectively brought to a halt but Illegal “Palestinian” construction goes on in Jerusalem, the Negev and elsewhere with the latest loss of sovereignty being a highway being built by the Palestinian Authority (PA) from Gush Etzion to the Dead Sea all financed by the EU. It seems that all it takes for the Israeli Government to back off is for the PA to erect an EU logo at any construction site.

In respect to tunnels, residents of northern Israel and those living in the Israel/Gaza region have been saying for ages that they can hear tunnelling going on late at night and into the early hours of the morning but the IDF, under the control of Ya’alon (Defence Minister) takes no effective action but resorts to mild platitudes supposedly to reassure residents that their concerns will be addressed. Netanyahu’s latest comment that he would take stronger action than in operation “Protective Edge” if terrorists came out of tunnels and actually killed Jews is, on close examination, not reassuring. The bottom line is that by this weak posture a clear message has been sent to Israel’s enemies that under this leadership, Israel will forever be reactive and never proactive in the defence of its citizens. It is worth remembering that operation “Protective Edge” ended in the usual fashion both prematurely and inconclusively and with nothing remotely resembling a military victory.

It should also be remembered that even after the previous Gaza conflict in 2014, Israel allowed the resumption millions of tons of cement to be imported back into Gaza from primarily Ramallah based cement factories. Did some fool in this administration think that this time the material would not go into tunnel construction?

One has to ask what is wrong with Jews?

Do we have some suicidal gene buried deep in our DNA?

Both Netanyahu and Ya’alon could learn something by paying close attention to how el-Sisi of Egypt deals with terrorist tunnels found in the Egyptian/Gaza border region.

Netanyahu’s call to the international community to put an end to the PA’s incitement to terror can only be described as pathetic. The only nation that can and should put an end to Palestinian incitement, in all its forms, is Israel, but under this man, Israel may have the means but has lost the will to do so. Netanyahu apparently hasn’t woken up to the fact that the international community couldn’t care less about murdered Jews. The PA and Hamas need to be crushed and brought to their knees but unfortunately he keeps reiterating how he is willing to meet that arch chief terrorist Abbas, the leader of the PA, to resume “peace talks” with no preconditions! It is Israel’s job to end the murderous terrorism running rampant throughout the streets by dealing with terrorists in the only language they understand and in the process if that requires imposing martial law in many areas, incarceration and eventual deportation for many so called Arab “citizens” then so be it. It should be remembered that these same Arab “citizens” were granted citizenship as if it were confetti thrown at a passing parade without even so much as a pledge of allegiance in return. It appears that in respect to this folly, the chickens have come home to roost.

Netanyahu even continues to refer to the “two state solution” which any thinking person knows is dead and buried. He again recently called for the Knesset to impose “sanctions” on Arab Knesset members, those so called “citizens” who incite terrorism, treason and hatred at every opportunity from within and without the walls of the Knesset.

Is that it, “sanctions”?

Is that the best he can do?

This leader has made no recent attempt to debunk the fictitious so called “Palestinian narrative” and thanks to this inaction, the world now believes the propaganda set forth by the PA well before the disastrous Oslo accords, which was nothing less than an abandonment of sovereignty. It seems that Israel is out maneuvered at every step.

The insane magnanimous gesture by Moshe Dayan after the 1967 military victory by allowing the Muslim WAQF to maintain administrative control over the Temple Mount has been seriously compounded by Netanyahu. Dayan in one fell swoop turned the victory of 1967 into defeat and now Netanyahu, some five decades later has in effect abandoned the Jewish heritage of this site by strictly maintaining a “status quo”, with Israeli police doing the work of the WAQF in making the site “Judenfrei”.

Israel is incapable of confronting other serious issues such as hostile NGOs (both foreign and domestic) and a leftist press which undermine the country at every opportunity. Enough with the nonsense that these entities represent some thriving democracy, enough. They are turning this “democracy” into a political basket case.

I conclude that Netanyahu is a leader who inspires absolutely no confidence and offers no solutions and should therefore step down. For those who keep giving him the benefit of the doubt and keep making the irrelevant comment that he is doing his best, I say in response that this man’s best is simply not good enough. Israel today can best be described as a ship adrift on the high seas without a rudder and requires a drastic turnaround on virtually every issue confronting the nation.

About the Author
Gil Solomon is a retired finance manager and author.
Comments