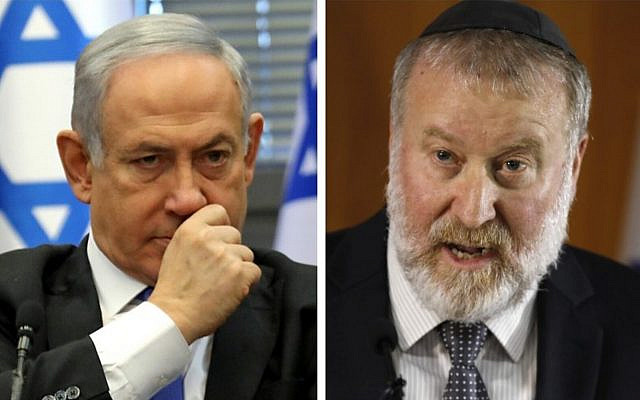 Israel’s economy is facing an extraordinary crisis. Unemployment rates are at record levels. Two-thirds of the country’s self-employed have taken a hit to their earnings. Indeed, the entire economy has suffered a huge shock, and is facing a period of dramatic change. In such a situation, the political system should be putting aside all disputes and focus on devising and implementing vigorous and determined steps to extricate the country out of this crisis. Instead, Israel’s political deadlock is escalating day by day.

The government is almost completely paralyzed. It appears that the only thing standing between us and another round of elections has nothing to do with the current crisis, but rather with Prime Minister Benjamin Netanyahu’s demand for an immediate change to the system for appointing senior public officials. Netanyahu is particularly focused on changing the system for appointment high-ranking civil servants, especially those in charge of law enforcement – the Attorney General, the State Attorney, and the Police Commissioner. At the heart of the changes Netanyahu is pushing for is his demand to grant politicians – in this case, he himself or those in his inner circle – with greater influence, if not total control, over these appointments.

This demand must be met with a resounding no, for several reasons.

Public trust is at stake

The first reason not to meddle with the appointments system is so as not to destroy the public trust in Israel’s law enforcement agencies. We should bear in mind that the individual behind the current mechanism for appointing the Attorney-General is none other than Prime Minister Netanyahu himself. The ‘Bar-On–Hebron Affair,’ which took place during Netanyahu’s first term as Prime Minister in 1997, uncovered serious flaws in the appointment system which had been in place till then. As a result, Netanyahu appointed a commission headed by the late Supreme Court Chief Justice Meir Shamgar to recommend a process that would restore public trust.

Netanyahu’s government eventually adopted Shamgar’s recommendation to establish a candidate search committee whose composition would ensure the independence, moral integrity, and professionalism of the individual holding this sensitive position. A ministerial team, also appointed by Netanyahu, recommended establishing a committee charged with vetting senior civil service appointments, including for key positions as police commissioner and the IDI Chief of Staff. The main purpose of this committee, currently chaired by former Supreme Court Justice Eliezer Goldberg, is to ensure the ethical integrity of the appointments process. Similarly, a procedure was put in place to safeguard these values in the selection process for the post of Attorney General. If we examine the functioning of these appointment bodies over more than two decades, we see that they have performed well. And so, as the saying goes, if it ain’t broke, don’t fix i – certainly in the case of positions that are so key to a democracy.

The second reason for why we must prevent politicians from gaining full control over the appointments process is that there are already checks and balances in place that grant the political echelon considerable influence. For example, the appointment of a police commissioner is a process led almost exclusively by the Minister of Internal Security, who submits the name of a preferred candidate for review by the Committee for Senior Appointments. It would be unthinkable to oppose this stage in the appointments process, designed to ensure that an individual holding a position such as police commissioner – who wields such broad authority to influence our lives as citizens, including with regard to the legal use of force – meets at least minimal standards of ethical integrity.

And yet, according to recent reports, the Minister of Internal Security is seeking to bypass the committee and decide on the next police commissioner without any external oversight. This is a manipulative and misleading use of the term ‘governance,’ with the aim of pushing through steps that may facilitate further instances of corruption. This is a wake-up call to all of Israel’s elected officials, especially those from the Likud, who have until now kept silent and done nothing to quash Netanyahu’s demands, which are aimed at nothing more than to trample over the rule of law. Now is the time to speak out and act to protect the independence and integrity of the guardians of our legal system and to re-focus all the coalition’s efforts on providing effective responses to the massive economic crisis.

The third reason why changing the system of appointments is equivalent to crossing a bright red line, relates to the Prime Minister’s personal circumstances. The fact that Netanyahu, who is currently on trial for serious criminal offenses, is engaged in political negotiations that include a demand for greater influence over the appointment of the State Attorney and the Attorney-General whom he will face in the courtroom, lays bare the gravity of the conflict of interests involved. In fact, given the current circumstances, these negotiations are entirely illegitimate. The Prime Minister will soon need to decide whether to plunge Israel into general elections for the fourth time.

About the Author
Yohanan Plesner is the President of the Israel Democracy Institute. He served as a Member of Knesset for the Kadima party from 2007–2013. He lives in Hod HaSharon with his wife and four daughters.
Related Topics
Related Posts
Yohanan Plesner
Comments