“For the sin, we have sinned before you with haughty eyes (arrogance)”.

In his arrogance, he is convinced that nobody else comes close to the stature, statesmanship, and caliber of his leadership. And for years, many people in Israel were convinced that there was no one else and that we could not afford to not have him lead us, even if it meant that we had to tolerate his corruption and the exploitation of his position for personal gain.

We, the Jewish People, have known many false messiahs. From Jesus, to Bar Kochba, to Shabtai Tzvi. They all had a popular following of people who believed that they were “the one”, who would redeem us. At the height of their popularity, these false messiahs came to believe their disciples, convincing themselves of their indispensability, that they were our “saviors”.

“Only Bibi can lead us”.

It is called a Messiah Complex. He’s just another one.

And then Walla! A government was formed without him! But Bibi, bloated with the belief of his preeminence, refused to believe that it was possible. He was cheated! And even more to his chagrin, both Bennett and Lapid have proved that they were not only competent, but they were good, and they were effective, and the government worked. A wind of freshness and a renewed belief that the government could serve the people swept the country. The myth was broken.

And Bibi couldn’t accept that. His ego was badly bruised. What a travesty! In his deluded perspective, only he has the moral mandate to be Prime Minister, and anyone else is an impostor, a mountebank. How dare they?

And so, he decided that he would give no validation to any government that he does not head. There is no other logical explanation for his mean-spirited conduct regarding everything this government does. In his obsession, he has no brakes. He will undermine the authority and credibility of our legally constituted government, the ends justify the means, even if it damages the country’s national and security interests. Even if it means torpedoing this important agreement, plunging Israel into another war with Hezbollah, with the risk of the loss of hundreds of lives.

He is just like Samson in the temple of the Philistines; in his blind vindictiveness, he will bring the roof down on us all, if he cannot be Prime Minister.

“Yair Lapid is shamefully surrendering to [Hezbollah leader Hassan] Nasrallah’s threats”, he tweeted. “He is giving Hezbollah sovereign territory of the State of Israel with a huge gas reservoir that belongs to you, the citizens of Israel, all without a parliamentary debate and without a referendum. Lapid does not have the mandate to hand over sovereign territories to an enemy state.”

He then added, “Should this illegal underhanded opportunism pass, it won’t be binding. Lapid has no mandate to hand over sovereign territories and sovereign assets that belong to all of us to an enemy state.”

It was the day before Yom Kippur, just before the Jewish world started fasting to atone for our sins.

“For the sin, we have sinned before you, with knowledge and deceit”, while he knowingly deceived the public, with forethought.

“For the sin which we have committed before you, by defrauding another”, “And for the sin, we have sinned before you, with malice or with forgetfulness”, while he knowingly and maliciously defrauded the public about the facts of the deal.

Four times during the Fast, we recite the Text of Confessions, of our sins, “על חטא”. He too, recited the confessions, while beating his chest. Given this latest tweet, I can imagine Netanyahu reciting these confessions, paying little more than lip service.

Which is just another sin for him. “For the sin, we have sinned before you, with the paying of lip service”! 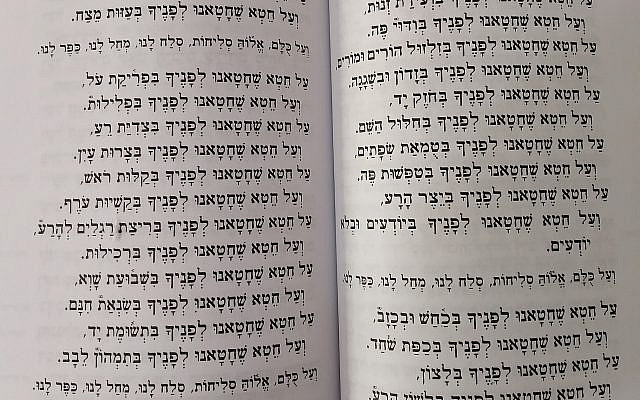 The Text of confessions, is recited 4 times on Yom Kippur. (Own photo).

The storm of emotions raged in me went from anger to outrage, disgust, and revulsion. The ill-natured and devious way his mind works never ceases to amaze me.

Because there is not an ounce of truth in this tweet; it is all manipulative lies, misrepresentations, and malign incitement. 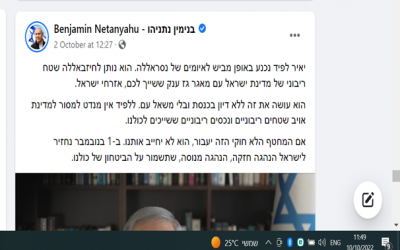 But I want to draw your attention to the subliminal messages in this malicious missive, that expose not only his deep-seated hatred and distrust for Arabs and Muslims but also the evil intent of his demagoguery.

He said “giving Hezbollah sovereign territory of the State of Israel”? Not Lebanon, but Hezbollah. It’s not a mistake, it is intentional. It’s a double-barreled implication of treachery:

With the first barrel, he is intentionally intimating that Lapid is not negotiating with a Lebanese emissary through an intermediary, but that he is capitulating to the arch-terrorist Nasrallah, the leader of our most bitter of enemies and an Iranian proxy, and who is responsible for the murder of tens of Israelis.

With the second, he is creating an allusion to the Oslo Accords, dredging up memories of that tumultuous period, as well as the “din Moser” imposed on Rabin, for giving Israeli territory to Arafat.

It is a shocking repetition of the same rhetoric that led to the assassination of Rabin, with the same malintent, albeit more subtly. But do not be fooled, it is a dog whistle to his supporters and his fanatical, extremist allies, whose ears are attuned and receptive to his speechcraft.

Netanyahu’s use of suspicion by association as a technique to rouse his rabble is his signature stock in trade.

In another tweet, he accused Lapid’s government’s decision to budget 53 billion NIS for the development and advancement of Israeli Arab communities in the South, as gifting 53 Billion NIS to “the Muslim Brotherhood”. Because Mansour Abbas’s party, Ra’am, is a coalition partner and is the political party for the Southern Islamic movement. To be clear, the Southern Islamic Movement is no less fundamentalist than Shas. “The Islamic Movement would engage only in lawful activity, with an emphasis on Islamic proselytizing, education, and the development of health and welfare services for the Arabic populace”. (This, according to a study conducted by Nachman Tal, and published in INSS, in 2000).

But of course, to Bibi, if you are a religious Muslim, then by association, you “have” to belong to the Muslim Brotherhood, and therefore you are potentially a terrorist.

The ramifications of this twisted suspicion by association are alarming:
Itamar Ben Gvir used to use the slogan “מוות לערבים” – “death to Arabs”. He says he has changed, and is now more refined. Now, he chants “מוות למחבלים” – “death to terrorists”, pandering to the gut reactions everyone feels after a deadly terrorist attack. That’s more palatable, right?
And now, Netanyahu is saying that all Arabs, who happen to also be Muslims, are suspected of belonging to the Muslim Brotherhood, a terrorist organization, and are therefore possibly sleeper terrorists. And we all know how we should deal with terrorists. In the past, led by Netanyahu, there has been a blanket rejection of the notion that Arab parties could participate in government as part of a coalition because they would be a fifth column in government. He has implied that they are dishonest and cannot be trusted, and therefore their polling booths should have closed circuit cameras “to make sure they don’t falsify votes”. This is taking racial prejudice and the invalidation of Israeli Arab citizenship an extreme step further – and implying that Lapid’s and Bennett’s cooperation with Abbas is like collaborating with “the enemy”, if not in so many words. He is creating the atmosphere for Israel’s own Charlottesville hate fest.

For how long will we tolerate his incitement?

About the Author
Paul Mirbach (PEM), made Aliya from South Africa to kibbutz Tuval in 1982 with a garin of Habonim members. Together they built a new kibbutz, transforming rocks and mud into a green oasis in the Gallilee. Paul still lives on Tuval. He calls it his little corner of Paradise.