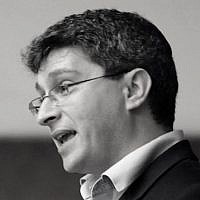 The Blogs
Jonathan Rynhold
Apply for a Blog
Please note that the posts on The Blogs are contributed by third parties. The opinions, facts and any media content in them are presented solely by the authors, and neither The Times of Israel nor its partners assume any responsibility for them. Please contact us in case of abuse. In case of abuse,
Report this post. 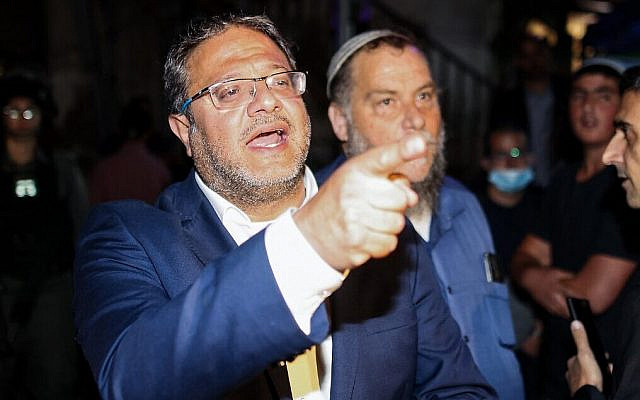 MK Itamar Ben-Gvir (front), head of the Jewish extremist Otzma Yehudit party, with Bentzi Goptein, head of the extreme-right Lehava group, in the Sheikh Jarrah neighborhood of East Jerusalem on May 6, 2021. (Ahmad Gharabli/AFP)

More than anything else, what distinguished this round of fighting with Hamas was the unprecedented violence perpetrated by Arab and Jewish thugs within Israel’s pre-1967 borders.

Taking advantage of a confluence of combustible circumstances at well-established flashpoints, the Kahanist Itamar Ben-Gvir and his racist thugs, as well as the Jerusalem ‘Shabab’ and Hamas served up a lethal cocktail of violence and destruction.

Between them, they have tried to light the match many times since the summer of 2014, but Israel’s longest-serving Prime Minister proved adept at blowing out the match quickly and efficiently. So why did he fail this time?

It comes down to this: Netanyahu is seemingly incapable of distinguishing between his own personal interests and the interests of the State of Israel. Since his indictment on charges of bribery and corruption, he acts as if his tenancy in the Prime Minister’s residence on Balfour Street is so critical to the future of the country that it can justify almost anything, including an unashamed and illegal attempt to appoint a ‘loyal’ Minister of Justice.

Tragically, the politics of narcissism also accounts for Netanyahu’s fatal lapse in the role of guardian of Israel.

First there are the sins of omission.

During the flare-up of previous tensions in Jerusalem, Netanyahu acted quickly and in cooperation with Jordan and others to calm things down. This time, Netanyahu did not seek outside assistance until it was too late. He did eventually get Ben-Gvir to leave the flash point at Sheikh Jarrah and he did re-route the Jerusalem Day march, but only at the last minute. Too busy trying to save his own skin, the watchman left the door ajar and by the time he tried to shut it, it was too late.

Then there are the sins of commission.

The Prime Minister connived to ensure that Ben-Gvir succeeded in entering the Knesset. This, Bibi seemed to calculate before the election, was the only way to prevent his own removal from office. Without his intervention, it would not have happened. When the longest-serving Prime Minister in Israel’s history empowers a Jewish supremacist, this inevitably emboldens his legion of followers, as was evidenced in the clashes at Sheikh Jarrah and in the racist chants at demonstrations in Jerusalem in the lead up to the explosion of violence.

What message does it send to Israel’s Arab citizens when the Prime Minister empowers such people?

Ironically, it is Netanyahu’s narcissism that provides an opportunity to set Israel on the track towards coexistence. After years of presenting Arab parties’ participation in government as something akin to serving a pork chop at a bar-mitzvah, it was Bibi himself who gave a “Kashrut” certificate to Ra’am, the Islamic party led by Mansour Abbas. Because, after the election, his only chance of retaining power lay in bringing Ra’am into his right-wing, Ultra-Orthodox coalition. But having failed to form a coalition and having granted Ra’am legitimacy, Abbas is now free to join a government of national unity led by the right-wing Bennett and centrist Lapid; should Bennett prove willing and Lapid able, to complete this difficult task.

Abbas himself visited one of the burnt out synagogues with the mayor of Lod and promised to help rebuilt it – a bold move.

Contrary to the perceptions generated by thuggish extremists, and despite a genuine and deep ideological divide, moderation and coexistence can draw on a large reservoir of good will. A major survey on Jewish-Arab relations conducted by the Israel Democracy Institute in 2019 demonstrated that around 90 percent of Jews and Arabs have good or very good interpersonal relations in the work environment, and a large majority were prepared to accept the other as a personal friend. About two-thirds of Israeli Arabs were proud to be Israeli, while a majority of Israeli Jews supported equal funding for Jewish and Arab municipalities

The consequences of political narcissism cannot be undone, but they can be turned against Netanyahu himself through the formation of an unprecedented coalition government that points the way to something the thugs find repulsive – peaceful, respectful, coexistence.

About the Author
Jonathan Rynhold is a professor in the Department of Political Studies at Bar-Ilan University. His research focuses on US-Israeli relations, as well as Israeli politics and the peace process.
Related Topics
Related Posts
Comments