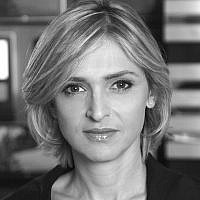 The Blogs
Dana Weiss
Apply for a Blog
Please note that the posts on The Blogs are contributed by third parties. The opinions, facts and any media content in them are presented solely by the authors, and neither The Times of Israel nor its partners assume any responsibility for them. Please contact us in case of abuse. In case of abuse,
Report this post.

Yet the right-wing government actually did succeed in surprising regarding the complex and volatile issues of religion and state. And not just any right-wing government but right-wing ultra-orthodox (“Haredi”), one that will be remembered as being the first to recognize the Reform and Conservative streams of Judaism – after a struggle that has been ongoing for years.

The new arrangement at the Western Wall, which basically appropriates the monopoly over the site from the Orthodox establishment, is a genuine revolution. Although the Women of the Wall had struggled for nearly three decades to exercise their right to wear a tallit (prayer shawl) in the women’s section (and had to make do with praying in another area), and even though it will take more time until the plans to build a new, proper entrance to the egalitarian section are implemented – if ever – nevertheless, for the first time a government with a haredi minister, as well as a minister who has declared that Reform Jews are not Jews, has taken a decision that amounts, from their point of view, to placing idols in the Temple.

The struggle of the past few years over the Western Wall remained below the local public radar, but it took world Jewry by storm, especially Reform and Conservative Jews in the United States. For those who had seen how the Western Wall was turning into a ultra-orthodox synagogue while official Israel was looking the other way, for those who were shocked by the arrest at the Wall of Anat Hoffman and her fellow Women of the Wall just because of their faith – this was too much. Just ask official Israeli representatives, from the prime minister on down who met with Jewish communities in the US and were repeatedly asked about the Western Wall before any other issue, even nuclear Iran.

While the Israeli public caved in without a struggle to the Orthodox monopoly, as if it were the hand of fate, Jews in the US refused be seen as an ATM to dispense cash in support of Israel with no rights or recognition. “Enough already,” they said, even to Minister of Diaspora Affairs Bennett in a language he understands; and not for naught did he, in turn, rush to establish facts on the ground, laying down the plaza for the temporary egalitarian section, where the permanent plaza is to be built, in defiance of his fellow party member Uri Ariel, who voted against the recent government decision.

Incidentally, it was the prime minister who identified the problem first, and even before Bennett’s opportunistic move he appointed Cabinet Secretary Avichai Mandelblit to find a compromise resolution, knowing that he would be going against his natural partners, the Orthodox parties Yehadut HaTorah and Shas – whom he had sworn not to hurt again.

Turns out that where there’s a will, bold decisions can be taken to ensure the future of the Jewish people, and one can defy the consensus among voters and ministers and even cause things to happen that defy all odds. This is called leadership, and this is what Netanyahu demonstrated in the context of an issue that has caused past governments to collapse.

The same prime minister who has dragged his feet for years on implementation of the two-state principle (which he himself accepted at the start of his second term) is the very prime minister who will be remembered as having launched a revolution that touches on all aspects of religious pluralism and provided official state recognition of the fact that there is more than one way to be a Jew. That is, if you will it, it is no dream. All you need is faith in the decision-making process and the power to implement.

Netanyahu proved that he is able. But only when he wills it. From this it follows that it is finally time to internalize the fact that this same Netanyahu is not interested or does not currently believe in a political solution . It’s not Abu Mazen, or not just Abu Mazen. Nor is it concerns regarding coalition partnerships, as he told the White House. Anyone who still harbors illusions about Netanyahu taking bold steps towards a peace initiative is invited to visit the bedrock of our existence and observe the power Netanyahu has to cause a revolution when he believes in it. Let the The battle over the Western Wall be the example.

About the Author
Dana Weiss, an award-winning journalist, anchors the prime time Saturday evening news on Channel 2, the most watched news program in Israel. Previously, she hosted ‘Meet the Press’ for almost a decade.
Comments
Advertisement