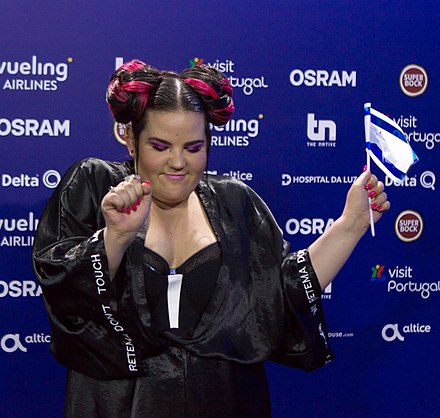 “I’m so happy!,” cried the dynamic, fat 25-year old from Hod HaSharon in English last night after becoming the fourth Israeli in history to win the Eurovision Song Contest. “Thank you for accepting differences between us. Thank you for celebrating diversity!” continued the excited singer of  the winning “Toy.”

I suspect most American Jews don’t know the name of the person I speak of. But among Israelis there is certainly no need to mention her name. Everybody knows who Netta Brazilai is, and everybody knows what she has accomplished.

If ‏I had not made aliyah 3 1/2 years ago, I probably wouldn’t know who Netta is either. The kind of bubbly, disco-ish pop that characterizes Eurovision really isn’t my style. But national pride is national pride, and I found myself on the edge of my seat waiting for the final results in Netta’s come-from-behind victory (the so-called popular vote helped her overcome a deficit from the expert ‘jury’ national votes). Besides me, sat my wife who, as a long-time advocate of fat acceptance, is especially excited about Netta’s rise and her message of body acceptance.

I really don’t want to convince anybody to listen to Netta’s music. But I wish more American Jews knew who she was and what she stands for and expresses about the nature of this little country I have decided to make my home. Americans, both Christian and Jewish, tend to know only a sort of Disneyland version of Israel. They run from the plane to the Kotel (Western Wall) and to Masada. Even if they know actual people who live here, if they come on some tour — as so many do — they often cancel plans with these ‘real Israelis’ because they’re too busy seeing the sights. …. “I’m sorry, but we had such a full day!” . . .  Can you tell this has happened to me?!?!) 🙂

Europeans are getting a richer view. Most of them sympathize with the Palestinians, but they’ve also had a chance to see and meet Israelis who are the likes of Netta. Young, dynamic, creative, optimistic people who — like Netta — had an army service experience that did not take the joy or idealism out of them. I can’t tell you how many Americans I’ve talked to who can only see required army service as some kind of terrible burden that breaks the spirit of Israel’s young people. And, of course it’s not a great experienc

e for every Israeli. But it does have many benefits, in some ways functioning as a kind of community college that helps young people develop confidence and independence, and often skills that they will be able to use in the private sector later (Netta was actually in the Israeli Navy band during her military service).

I think another thing Europeans can clearly see from being exposed to the likes of Netta is that it’s a myth to say all Israelis are militaristic. I don’t know anything of Netta’s politics, but her message is clearly one of love, not hate. Such messages of love — such a hunger for peace — seems to just ooze out of the streets of Tel Aviv to me.  . . Granted, maybe it doesn’t feel so much that way if you’re driving on its crowded streets! But listen to the music that you hear coming out of the windows. A surprising amount of Reggae and disco, as if the whole city is hungering for the high hopes for peace that the late 70s brought. I would love to hear Netta’s thoughts on this.

My sense is also that Netta gives lie to the myth that all Israelis are completely religious or completely secular. Clearly, Netta’s persona is a secular one. But her commitment to values indicates someone who believes in more than the self-serving material. She has a mission, one that is surely rooted in a spirituality.

Netta is not the first Israeli Eurovision winner to project a message of diversity, acceptance and change to the world. The transgender Dana won in 1998 with her song “Diva”.  Not surprisingly, some Orthodox Jews opposed her representing Israel in the contest. Then, as now, Israel is a diverse place full of the contradictions, intensities and paradoxes that make a place — and life! — really interesting.

The Israel of Netta Brazilai is an exceptional place, a place worthy of the love of Americans. It’s one with a truly contemporary beauty and complexity that probably has more hope of attracting young Americans to their identity as Jews than the ‘Disneyland’ trips to Masada, etc. does. But we keep spending countless millions on Birthright —- on a Disneyland experience where Diaspora Jews actually spend most of their time and energy encountering each other with occasional stops on the bus ride to visit places that are all about the Israel of the past, and seldom about Netta’s Israel of today.

Since Birthright’s goal is to get American Jews to marry other American Jews, I guess the Birthright program indeed fits its goals. But is this really how we build a strong Jewish community for the future, by essentially cutting American Jews off from the best that is the Israel of “now.’?

PS Here’s a great interview with Netta (in Hebrew) where she talks about her personal and professional struggles with a great deal of depth and insight. Here’s a short sample:

People who experience things in an extreme way — let’s say loss — that makes them grow up fast. My life experience was so extreme — to look like I do and to go up on stage, that forces you to go through something extreme. That’s the reason [I talk like an older person would sometimes.]

About the Author
Alan Abrams is a spiritual care educator who made Aliyah in 2014. He and his wife live in Jerusalem with their two "sabra" children. Alan is the founder of HavLi and the HaKen Institute, spiritual care education and research centers based in Jerusalem. A rabbi, Alan received a PhD in May 2019 from NYU for his dissertation on the theology of pastoral care. He was a business journalist in his first career.
Comments