In Kababir, a lovely residential neighborhood of Haifa, on a hill with a stunning view of the Mediterranean, stands the stately white mosque of the Ahmadiyya Muslim Community. The Ahmadiyya branch of Islam was founded in 1889 by Mirza Ghulam Ahmad in India, and is dedicated to a pacifist interpretation of Islam. Its adherents believe that Ahmad himself was the long-awaited Mahdi, the Redeemer of Islamic prophecy, a belief which has resulted in a century of ruthless persecution at the hands of their fellow Muslims.

It was inspiring and refreshing to hear their story and see their mosque, a beautiful edifice that is open to all. There are 3,000 Ahmadis in Israel and about 15 million worldwide, and they don’t make a lot of noise, but they have a full-throated message of peace rarely heard in the Middle East. Our hosts were a sincere and witty Canadian-Israeli named Muad and a modest young missionary from India named Mohammed. Muad told us of a Palestinian terrorist whose suicide bomb failed to detonate and went to prison, where he encountered the Ahmadiyya teachings and joined their faith group. Muad said that every time he can convince one person that violence must be replaced by love, he has left the world a better place. It seemed to be of utmost importance to him to explain to a group of tourists from halfway around the world that a true understanding of Islam teaches non-violence. One visitor, a thoughtful young man from Vancouver, asked Muad what “the goal” of their spiritual journey is. He answered succinctly: “Never hate, always love.”

To the largely Christian group that accompanied me to the mosque this message sounded like the one that Jesus preached. Jesus, according to the Ahmadi narrative, did not rise to heaven 2,000 years ago, but rather survived the crucifixion, found his way to India, and died of old age while searching for the ten lost tribes. His vision and prophecy were adopted by Ahmad 1800 years later.

At first encounter, the Ahmadi version of history might seem a bit odd, but one need only consider the narratives of creation, salvation and redemption proffered by all faiths to realize that none are more or less exotic than the next. More to the point, much of their world view is a refreshing departure from classical religion. They believe, for example, that there can be no conflict between the word of God and the work of God, and hence science and religion must be in agreement.

Israel is the only country in the Middle East in which the Ahmadis are allowed to practice their religion in peace. In some countries it is illegal for them to even say that they are Muslims, and in others, they have been the victims of harassment, persecution and terror. Hence, ironically, the Ahmadiyya Mosque of Haifa, with a few hundred families, is the Middle East headquarters of the Ahmadi faith. I do not point this out with pride, just as I have no right to brag about not committing random acts of violence every day. But it is true, and sobering, and worthy of note.

Kababir is a tranquil spot. The Ahmadis have always refrained from sounding the early morning call of the Muezzin, so as to avoid disturbing their non-Muslim neighbors, who include Jews, Christians and Druze. Indeed the Mosque looks a bit out of place in the quiet little Haifa neighborhood, as though a pagoda had suddenly appeared next to my elementary school playground in suburban Maryland. But if the Ahmadis are a surprise, they are so in a way that is desperately needed in this part of the world.

The important question is also the simplest: “What is your goal?” Any religion that truly leads to more love and less hate is a good thing. This statement is so obvious and yet cannot be repeated enough. I am neither a Muslim nor an Ahmadi, but I would be proud to have that as a personal legacy. Whether as an individual or as a faith community, it is easy to say but a lifelong struggle to achieve: “Never hate, always love.” 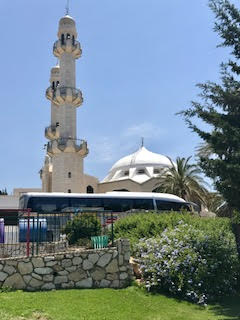 The Ahmadiyya Mosque (Marlene Morton)
About the Author
Bill Slott is a licensed Israeli tour guide who has hiked and biked the length and breadth of the country. Bill is a member of Kibbutz Ketura, where he has lived since 1981 with his wife and three daughters.
Related Topics
Related Posts
Comments