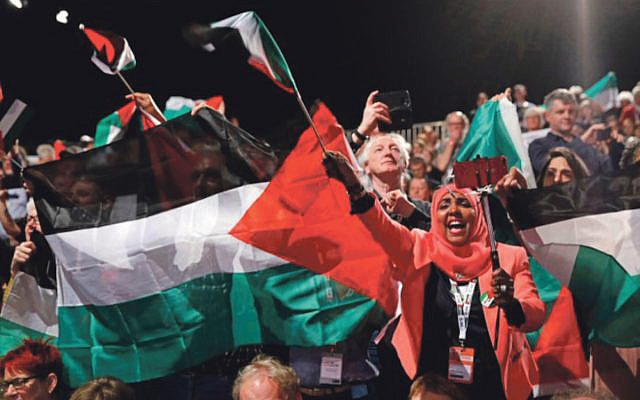 Palestine flags are waved during the Labour conference 2019 (Jewish News)

As well as being mired in institutional antisemitism, Labour has a Leader with a deep background of anti-Israel activity, and the party took a sharply more radical position on boycotts at its annual conference.

But what’s going on in terms of Labour’s personnel, its potential MPs?

Labour started the 2017 Parliament with 32 per cent of its MPs signed up as supporters of Labour Friends of Israel (LFI), and 50 per cent as supporters of Labour Friends of Palestine and the Middle East (LFPME). Some MPs sign up to both campaigns for balance. Support for the Palestinian cause is far higher than core support for the Corbyn project (about 13 per cent of Labour MPs) and extends deep into the historic mainstream of the Labour Party.

LFI has lost 20 per cent of the MPs it had in 2017 because they have moved to sit as independents or Liberal Democrats or retired.

These departures include some of the most prominent supporters of Israel in Parliament: the recent LFI Chairs Joan Ryan and Louise Ellman, Party Deputy Leader Tom Watson, Jewish MPs Luciana Berger and Ivan Lewis, and outspoken opponents of antisemitism Ian Austin and Mike Gapes.

Louise led the efforts to get Hezbollah proscribed in its entirety, and introduced legislation to tackle incitement in Palestinian schools. Joan launched the cross-party bill in support of the International Fund for Israeli-Palestinian Peace. Their departure leaves a huge gap.

In contrast only 12 per cent of LFPME’s supporters are leaving Parliament, though these include anti-Israel campaigner Chris Williamson.

But the problem is also about the new intake.

Assume Labour gets the same parliamentary seats it won in 2017.

16 per cent of the PLP (Parliamentary Labour Party) would be new.

Of these, 58 per cent are so clearly Corbynite that it is almost certain they would sign up to LFPME. In some cases their anti-Israel stance is radical. Bell Ribeiro-Addy (Streatham) participated in the Viva Palestinia (a charity fronted by George Galloway) convoys to Gaza in 2009, and worked as Campaigns Officer of the Palestine Solidarity Campaign (PSC). Apsana Begum (Poplar and Limehouse) has shared social media posts about Saudi Arabia’s “Zionist masters” and said a university was “offering scholarships to students for spreading Zionist propaganda”. Zarah Sultana (Coventry South) has said she supports “violent resistance” by Palestinians and would “celebrate” the deaths of Tony Blair and Benjamin Nentanayu. She called Israel “a state created through ethnic cleansing, sustained through occupation, apartheid and war crimes” and said “Those within the student movement who go to Zionist conferences and trips should be ashamed of themselves. You’re advocating racist ideology.”

The dozen moderate Labour candidates who would become MPs in this scenario include several who have been vocal opponents of antisemitism, and at least three who have participated in delegations to, or previously signed pledges of support for Israel But there isn’t an obvious next Louise Ellman or Joan Ryan.

Should Labour gain seats, 42 per cent of its top target seats are being contested by candidates who are identifiably Corbynites.

Such is the disgust about antisemitism in the Labour Party that many people in the Jewish Community, and their allies, will just be hoping that the party is obliterated electorally.

But this is unlikely to happen, and even if Labour stays in opposition, the change in the composition of the PLP, and the loss from Labour’s ranks of key pro-Israel figures, present practical problems for supporters of Israel. How do we make sure there are cross-party voices in debates about Israel in the Commons? How do we make sure Israel does not permanently become a partisan issue rather than reverting to a matter of bipartisan consensus? If Corbyn goes and Labour shifts back towards the centre, how do we make Israel policy part of that shift and not a baleful legacy of the Corbyn era? In practical terms, who will provide leadership to the remaining pro-Israel Labour MPs, of whom there could still be more than 60?

If Corbyn ends up in Number 10, there will be bigger things – hostile government decisions – to worry about. The relationship between Britain and Israel, which is vital for the UK’s security and trade, will be jeopardised.

But if he doesn’t, we will need to move fast to persuade more of those 60 Labour MPs who are supportive on paper to step up and play a bigger role in this debate. That will take real political courage on their part.

A measure of whether Labour ever deserves to recover from its current malaise will be whether it returns to a balanced position on Israel.

For now, we know that as well as Labour’s policy and leadership having shifted radically against Israel, the PLP looks like being quantitatively a lot more hostile, and qualitatively a lot more problematic too, with many of the strongest Labour voices for Israel departing and being replaced by a new cohort of outspoken, radical anti-Zionists.