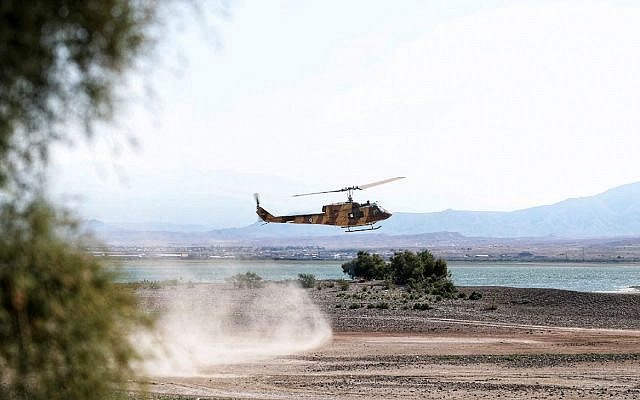 A helicopter is seen during an Iranian Army exercise near Azerbaijani border. Iranian Army/WANA.jpeg

Iran is still finding it difficult to adjust to the new geopolitical realities in the South Caucasus. Almost a year has passed since Azerbaijan retook control of its territory from Armenia in the Second Karabakh War, changing the 30-year-old geopolitical status quo in the region. In particular, the restoration of Azerbaijan’s control over the previously uncontrolled border districts with Iran seems to have taken Tehran by surprise.

Tension is high at present, as Iranian IRGC and army units are holding exercises at the Azerbaijani border. Tehran sees the drills as a counter measure to the recent exercises of Azerbaijani, Turkish and Pakistani special forces in Baku. In a recent interview Azerbaijani President Ilham Aliyev criticized the exercises near the Azerbaijani border and illegal fuel supplies from Iran to the Armenian forces in Karabakh. Noting that these are the first such drills since the 1990s, he questioned why Iran is conducting the drills now but did not do so during the Armenian occupation.

Asked about President Aliyev’s comments, Iranian Foreign Ministry spokesman Saeed Khatibzadeh said that Iran will not tolerate the presence of Israel near its borders. Azerbaijani-Israeli ties in the security sphere have been a key factor in enabling Azerbaijan to modernise its armed forces with advanced high tech Israeli weapons. Azerbaijan opened its trade office in Tel Aviv, and Azerbaijani politicians, MPs and political analysts have called on the Azerbaijani government finally to open an embassy in Israel. It’s worth noting that in order to diversify its oil and gas dependant economy and revive the non-oil sector, Azerbaijan would benefit from deepening its ties with Israel in multiple areas.

Tehran was also angered by Azerbaijan’s action to halt the illegal passage of fuel trucks through Azerbaijani territory to Armenians in the Russian peacekeeping zone in Mountainous Karabakh. Although the Iranian ambassador to Azerbaijan, Seyed Abbas Mousavi, claimed that the fuel tankers belong to private companies, it’s clear that the fuel transportation companies are owned by the IRGC.

When the Azerbaijani army was liberating the border regions, Iran’s annoyance was noticeable. Tehran fabricated news against Azerbaijan by alleging that Syrian terrorist elements were in Karabakh and declaring that the Islamic Republic would not tolerate the presence of jihadis on its northern border. Tehran did not fail to notice when ethnic Azerbaijanis in Iran went to the border to cheer on the advancing Azerbaijani army. It was not a friendly gesture when Iran’s ambassador to Yerevan, Abbas Badakhshan Zohouri, visited the border region between Armenia and Azerbaijan and used binoculars to check Azerbaijani border positions.

Many academics take a constructivist approach to the study of Iranian policy, often arguing that Tehran conducts an ideological, pan-Shia foreign policy. However, Tehran’s policy towards Azerbaijan, a Shia majority country, illustrates that it adheres rather to Realpolitik and offensive realism in pursuing its goals. The central aim is the longevity and survival of the current political system, the Velayat-e Faqih. The existence of a secular, multicultural and multi-confessional Shia majority state which has excellent relations with Israel challenges the ideological pillars of the Iranian establishment.

Having a significant Azerbaijani population inside Iran, the largest minority in the country, Tehran’s biggest fear is that the trans-border ethnic kinship might be a destabilising factor with the emergence of a strong Azerbaijan Republic following the Second Karabakh War. Thus, Iranian regional policy favoured keeping the previously Armenian occupied Azerbaijani border regions (along a 132 km section of the border) as a “buffer zone” between its north-western territories, where the majority of the Azerbaijani population of Iran reside, and the Republic of Azerbaijan. This was the aim of Tehran’s material support for Armenian control over the territory, which included sending supplies of fuel, construction materials and military equipment, and allowing Russian military supplies to reach Armenia via its territory.

The joint statement of Azerbaijani, Armenian and Russian leaders which put an end to the war in November 2020 contains a provision to create a land corridor or communication route via southern Armenia linking mainland Azerbaijan and its exclave Nakhchivan and Turkey. This route will bypass Iran, depriving Tehran of transit revenues from Azerbaijan. It’s also important to note that Iran flooded the railway line in Zangilan during the occupation by building dams. Trains from Azerbaijan to southern Armenia used this route. Baku is rebuilding the old railway line up to the Armenian border and it seems that the flooded area will require more spending.

The communication route will create a new link between Turkey and Azerbaijan, which Iran is concerned about in geopolitical as well as economic terms, as it fears the impact of close cooperation between Ankara and Baku on sentiments among its own Azerbaijani population.

Another concern was voiced in an article in the Iranian media outlet Kayhan, associated with the IRGC. Regular contributor Sadollah Zarei warned of a “concealed alliance between the US, Turkey, Azerbaijan, Armenia and Israel” aimed at “geopolitical change with strategic consequences against Iran and Russia”.