I. Always open. Open arms. Gentle manner. Eye to Eye. Knows what you’re thinking. Believe in me. In you. Father, grandfather. Survived.  More than 1000 heroes could. The lives he touched. The lives he healed. Never forgotten.  Always alive. Emptiness. Sorrow. Only the figured imagination roams. Freely above us.  An angel is born. Looks down on us. Free of chains, malice. The love remains. A vessel for us all. Au revoir mon ami.  (By Stephen Horenstein, In Memory of Nico Sprecher z”l,  passed away December 10, 2018.  May his soul rest in peace)…………….. II. Nico Sprecher, z”l, some life highlights.  Nico was a “hidden child” for five years during World War II. As an infant he was hidden beneath floor boards in near the Belgium offices of the Gestapo. During the occupation he was not allowed to stand up, and lay silent in his small hiding place. At five he was freed; at that age he first learned to walk, as well as having his first taste of green vegetables. Nico met the love of his life Suzy when they were both fourteen, after the war. Suzy was also a hidden child. They raised a loving family of three sons Aaron, David and Eli.   Nico was a brilliant scientist and researcher.  Later in Israel, in 1996 Dr. Nico Sprecher founded the liaison office between the Weizmann Institute and the European Union. His lists of accomplishments in the scientific field are extensive and impressive. His love for friends and family was infinite. He was genuinely interested in every person he met. His eyes emanated light like a child’s and his smile was enrapturing. We will all miss him deeply………. III. Hesped for Nico Sprecher z”l, by Rabbi Chaim Kornberg.  “Nico was a very good friend to me and to Mindy and to all the people in our community.  It was always wonderful to meet him, whether in Beit Knesset, on the street or in the home which he shared with his loving soul-mate, Suzy.  Always a smile, a hug, a kiss and a positive and encouraging presence. He was among the first people who arrived on Shabbat mornings and helped to prepared the building for the prayers. Then he warmly greeted the other early arrivals. He and Suzy were a constant presence at our Seudah Shlishit gatherings and, after the learning, we still gave each other Yiddish blessings for a happy week. With their intellectual insights, they added a lot to the quality of our learning Nico shared his experiences as a child survivor of the Shoah.  He and Suzy were hidden children during the war years, and the constantly carried those difficult memories. During those years they first came to be the loving couple who served as an inspiration for all of us of what a marriage should be.  The atmosphere of their home is love–and whoever enters their home can feel it. Nico was especially proud of the character and accomplishments of his children and grandchildren. It seemed like he saw his family as his victory over the forces of evil in the world.  We are told that Nico was an excellent scientific researcher, and we saw that in the meticulous way that he would prepare delicious meals for their guests in their home.  And then he and Suzy would be very gracious and welcoming hosts–making their guest feel totally comfortable. Nico, we will miss your wonderful smile and presence. May your example of love and openness continue to accompany Suzy and your family and all of us, and may your presence in our lives always inspire us.”………..IV. Pictures below (TOP: Nico and Suzy in their younger years; MIDDLE, Nico and Suzy commemorating street plaques of those who perished in Germany; LOWER, Nico (standing at the far right) in 1995 at the ceremony of the liaison office between the Weizmann Institute and the European Union. 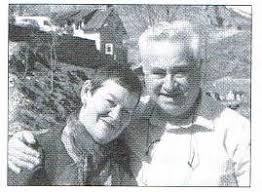 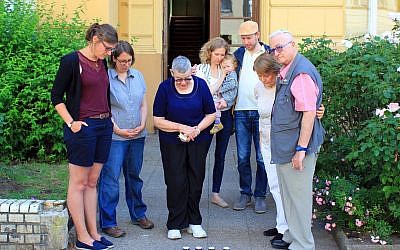 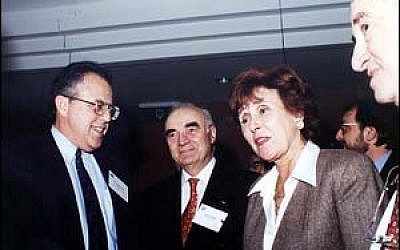