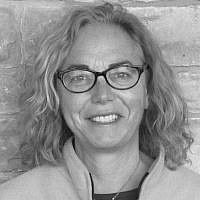 This week’s Torah portion, Netzavim, is always read the Shabbat before Rosh Hashanah. As I read it this year, 2016, and in the Jewish calendar, on the eve of 5777, the election between Hillary Clinton and Donald Trump is very much on my mind. In fact, this Shabbat afternoon, I’m going to go canvassing in West Asheville with a group called United against Hate. I’m attracted to it because the young woman who invited me has been active here in Asheville in Black Lives Matter  and,  after the police shooting in Charlotte, she went down there to Charlotte, and sent Facebook messages from there. And I marveled at her courage and commitment and mourned the fatigue and overwhelm that prevented me from going.

So this brings me to Netzavim, which starts out with Moses speaking to the people, telling them that all of us – our tribal heads, our elders, our officials, all the men, the children, the women, even the stranger within your camp, we all stand, or must stand, together in order for the bounty of the universal force to rain upon us.

And I wonder, what happens when everyone does stand together? I don’t think I’ve ever experienced that in my 64 years living as an American. From a very young age I watched separation upon separation — along political lines, ethnic lines, class lines — any line that anyone could find, separated us from standing together.

And as a practicing Jew, I literally feel my body quivering with the awesomeness of this picture of Moses,  a great inspiring leader — something else I’ve never had — standing before us and inspiring us to all stand together.

May all of us in this coming year contribute to the unification of all peoples, genders, identifications, all the energies of life that are needed to uplift the human race and to preserve our precious planet Earth.

About the Author
Roberta Wall offers trainings inspired by Dr. Marshall Rosenberg, founder of Nonviolent Communication and by the teachings of Mindfulness. She is a lawyer, mediator, trainer, parent, activist, mindfulness practitioner and coach. She shares her time between Israel and the beautiful Hudson River Valley of Upstate New York and travels the world coaching couples, individuals and organizations and facilitating workshops and retreats inspired by Nonviolent (Compassionate) Communication (NVC) as developed by Dr. Marshall Rosenberg and Buddhist teachers Thich Nhat Hanh and the Dalai Lama, and teachers and rabbis from her root Jewish tradition.
Comments