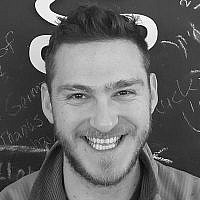 The Blogs
Zaki Djemal
Apply for a Blog
Please note that the posts on The Blogs are contributed by third parties. The opinions, facts and any media content in them are presented solely by the authors, and neither The Times of Israel nor its partners assume any responsibility for them. Please contact us in case of abuse. In case of abuse,
Report this post.

In response to recent publications decrying a visit by Harvard students to the grave of former PA chairman Yasser Arafat, under the auspices of the Harvard College Israel Trek, raising understandable concern, we, the undersigned organizers, would like to make a number of clarifications and share some thoughts on the matter:

This past Monday, participants of the Harvard College Israel Trek visited Ramallah in order to meet with senior members of the Palestinian leadership. During the visit students were shown the Mukataa, the headquarters of Palestinian Authority, which includes the grave of Yasser Arafat and met with Nabil Sha’ath, Ali Jarbawi, and members of the Palestinian Negotiation Team. In line with our objective to broaden exposure to the issues discussed on the trek, participants have been documenting the entirety of our time in Israel through pictures, video, blogging and other forms of social media. As such, a photograph of participants posing at the burial site of Yasser Arafat was shared on social media and picked up by various online publications.

The Trek was created by a team of Israeli undergraduates, all of whom grew up in Israel and experienced first-hand what it means to live here. Five of us are IDF veterans. One of us is an Arab-Israeli. Four of us were among the organizers of the inaugural Harvard Israel conference, the largest student-led conference about Israel on a North American college campus. We are actively engaged with Israel related issues on campus both at Harvard and across North America. And we are all deeply committed to the country we love and hold dear.

We developed and led the Trek because we believe in and have experienced firsthand the power of a broad and balanced Israel experience to challenge misconceptions and stereotypes and reveal the real Israel in all its beauty and complexity. We recruited fifty of the brightest and best Harvard students, none of whom are Jewish, to participate in a truly important educational experience. We have complete faith in the Trek participants — our peers and friends — and we are confident that they will continue to engage with the issues critically and genuinely.

As Israelis who love and care about the identity and future of Israel, we believe in the importance of nuanced and responsible engagement with the Israeli-Palestinian conflict in general and the Palestinian narrative in particular. That said, let us be clear: the visit to the Mukataa and to Arafat’s grave was never about honoring Arafat’s memory; not for a second would we dream of “paying respects,” as some have suggested, to a man responsible for the death of countless Israelis. And as Israelis, this experience was troubling and upsetting. But it isn’t about us. It is about creating an honest conversation regarding some of the most contentious issues facing both Israelis and Palestinians today.

Whether we like or not, Yasser Arafat is important to the Palestinian narrative, and as educators committed to an honest exploration of these issues we could not afford to deviate from Trek policy that encouraged students to document and share their experiences with their respective communities. We are saddened and sorry that a photo was taken out of context, causing pain to people who we love and respect.

The night following our visit to Ramallah we shared our own personal narratives with participants — growing up in the shadow of the second intifada, losing loved ones and friends in vicious terror attacks, serving in the IDF, our hopes and disillusionment surrounding the Israeli peace movement, the complexities of being an Arab citizen of Israel, and our struggle to engage the many issues facing Israel in a meaningful and unapologetic way. This is the story that wasn’t told by an isolated photograph taken out of context or sensationalist headlines that undermine our efforts to foster positive and constructive engagement with Israel.

Unfortunately most of those who posted and reposted the photo gave it the most negative interpretation and never paused to consider the trip’s aims or its robust educational curriculum. Nor did they take the time to reach out to us and ask for any form of clarification. Had they done so, they would have found that we took great care in preparing a program that spans the breadth and depth of Israel’s political landscape, cultural vibrancy and diverse communities:

Author and journalist Yossi Klein-Halevi shared his yearnings for peace coupled with his reservations about a future Palestinian state; at Yad Vashem, Holocaust scholar Rachel Korazim explained the impact of the Holocaust on Israeli identity; Nadav Tamir, Senior Policy Advisor to President Shimon Peres, told participants that he believes that President Abbas is a true partner for peace; Ambassador Dore Gold and Colonel Eran Lerman offered expert analysis of both local and regional threats to Israel’s security; Rabbi Nathaniel Elyashiv of Eli spoke about the Israeli settlement movement in Judea and Samaria and its importance to the Israeli story; overlooking Syria, students heard from the commander of an elite IDF unit charged with protecting Israel’s northern border. We also heard from Ari Shavit and Ami Ayalon who shared their own perspectives on the prospects for peace in the Middle East.

Ahead on the program, students will hear from Jon Medved and Google Israel CEO Meir Brand about the Startup Nation and meet with American Ambassador Daniel Shapiro to learn about the unique relationship between the US and Israel.

Some additional speakers with whom we met include: Danny Seidman, Tzameret Fuerst, Karen Tal, Gal Berger, Jodi Rudoren, Karen Brunwasser, Jimmy Levy, and Jeremy Aron — our fantastic educator and guide who helped connect the dots and weave the various experiences into a coherent and compelling narrative, one with which a cohort of non-Jewish participants could relate and identify.

Undoubtedly these are some incredible speakers who are capable of articulating Israel’s narrative with conviction, eloquence and compassion. But the real strength of the program is our ability, as trip leaders, to contextualize and reflect upon these conversations as we navigate the many challenges and opportunities facing Israel.

We stand firm behind our decision to visit Ramallah. Ignoring the Palestinian narrative would be seen as an attempt to mask the situation in the West Bank by focusing on issues beyond the conflict, and thus delegitimize our position as educators. But more importantly, failing to confront the reality facing Israelis and Palestinians is unjust, irresponsible and counterproductive, and it weakens the legitimacy of Israel in the broader sense. Our ability to expose students to a multiplicity of narratives is a sign of strength, not weakness. It is a testament to our unwavering commitment to building a better future for both Israelis and Palestinians. We might add that visiting Ramallah is not unique to the Harvard College Israel Trek: Every peer-led trip to Israel from the various Harvard schools, as well as universities across the country, includes a visit to Ramallah and a meeting with Palestinian officials.

From the onset we have done our best to be transparent about the trip, its programming and its goals, and we invite any interested parties to follow the student blog and gauge the impact of this experience for themselves.

About the Author
Zaki Djemal is Managing Partner of fresh.fund, Israel’s first university focused venture capital fund. He is also Co-Founder of דאבל ירושלמי دابل مقدسي Jerusalem Double, Jerusalem’s first backgammon league for Jews and Arabs, which in just over a year of operation is already 8,000 strong. In 2018, Zaki was selected for the Forbes 30 Under 30 list or emerging tech business leaders. He is a proud member of the Schusterman Foundation ROI and REALITY networks and serves on the boards of the Israel Harvard Club and Tevel b'Tzedek. He graduated with honors from Harvard College, where he studied Behavioral Economics. Zaki co-chaired this year’s Climb for Justice with fellow Tevel board member, Saul Singer, co-author of the book “Startup Nation.”
Comments