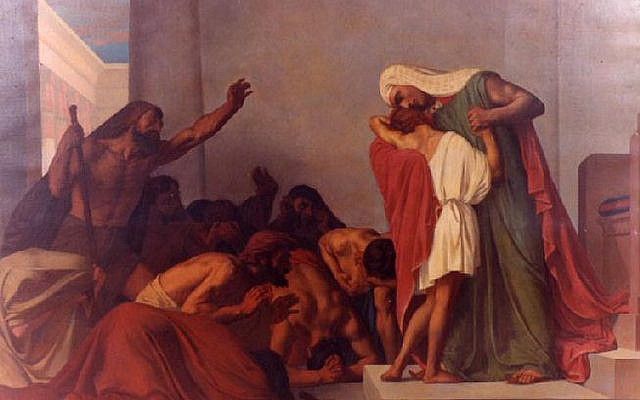 Joseph recognized by his brothers, by Léon Pierre Urbain Bourgeois, 1863 oil on canvas, at the Musée Municipal Frédéric Blandin, Nevers

It’s that time of year when Jews are called upon to express contrition for wrongs done to another, and for the aggrieved to accept the gesture and grant forgiveness. But just don’t turn to the Bible for lessons about this, because, remarkably, you won’t find any.

Consider the word we use in modern Hebrew to ask for and to grant forgiveness – selichah. No one in the Bible ever asks another person for selichah. And no person ever grants another person selichah, either. In the Bible, people only ask for and receive selichah from the Almighty. And when you look carefully at how that word is used you see that when God grants selichah it has a single meaning: that He has suspended punishment.

The rabbis of the Talmud have a word for asking for and granting forgiveness – mechilah. That word doesn’t appear in the Bible at all. Nor is there any word comparable for our term, apology.

The issue isn’t just one of language. There are simply no stories anywhere in the Bible – using any terms – where one person expresses remorse to another, and that person, in turn, accepts the gesture and expresses forgiveness.

Some point to the final episode of the story of Joseph and his brothers as a story of forgiveness. But rather than expressing remorse to Joseph, the brothers lie in the name of their dead father in order to save their skin. The terms they use are all ones that elsewhere mean one thing: please do not punish us. And when Joseph accedes, it is not because he is moved by their contrition – he actually reminds them of their heartlessness – but because they were pawns in the divine plan. The sale had to happen in order to bring Joseph to Egypt.

This is all rather shocking. How can it be that the Bible, the book of right and wrong, sin and redemption, is bereft of accounts of true remorse, the granting of forgiveness, and the healing of relationships?

To understand how the Bible thinks about rupture and repair in human relations, we must begin by noting the stories where something akin to forgiveness is, in fact, expressed, but only non-verbally: through a kiss.

The best example of this is in the book of Samuel. David’s son, Absalom, murders his half-brother, Amnon, and the king declares him persona non grata. Desperate for an audience with the king, Absalom employs various advisors to appeal to the king who finally acquiesces. Absalom enters the throne room and prostrates himself, at which point Scripture says, “and the king kissed Absalom”(2 Sam 14:33). Nowhere else does David kiss any of his other sons. This is the kiss of clemency and reconciliation. But has David forgiven Absalom for the murder of Amnon?

We see the same dynamic when Joseph reveals himself to the brothers. Genesis tells us that he and Benjamin – his only full brother and the only brother who didn’t participate in his sale – wept on each other’s neck (Gen 45:14). Only following that does Scripture say that Joseph kissed his brothers (Gen 45:15). Reunification with his only beloved full kin was marked by bi-lateral weeping. The kiss – offered unilaterally by Joseph to the brothers – also is a mark of clemency and reconciliation, but neither side speaks about the past. It doesn’t seem to indicate full forgiveness.

And finally, when Jacob made the trek to return to Canaan he was despondent about his impending encounter with Esau at the command of 400 men; after all, he had stolen Esau’s blessing at Isaac’s deathbed. When they meet, Scripture says, “Esau ran toward him, embraced him, fell on his neck and kissed him. And they cried” (Gen 33:4). Only after Esau unilaterally kissed Jacob – signaling his reconciliation– did they both then weep.

But why do biblical figures seemingly resolve their tensions only non-verbally? Why is there nothing akin to “I’m sorry for what I did,” and “I forgive you”?

Social psychologists teach us that when it comes to rupture and repair in human relations, there are two types of cultures. There are cultures of forgiveness and cultures of reconciliation.

Cultures of forgiveness are usually cultures with a strong sense of the individual. The offense was unfair and unjust. It creates a debt to the aggrieved. The apology of the offender allows the release of guilt. The apology pays off the debt and heals the insult and the injury. It allows for the aggrieved to achieve emotional closure. Where forgiveness is at a premium, the offender must do the work of accepting blame and committing to a new path. Only by righting the self, can the offender hope to right the relationship. There is clarity in what has transpired which paves the path for a redeemed future. The forgiveness offered by the aggrieved is an act of empathy with the contrition of the apologizing offender.

By contrast, cultures of reconciliation tend to focus on the collective. Who I am is entirely bound up by who we are, the bonds we share, and the common goals to which we aspire. When a relationship is ruptured, a premium is placed on re-achieving harmony with those around me. Here, value is placed on letting go. Introspection by the offender, and offers of apologies are, of course, always welcome. But not all are able or willing to do that work, and those cannot be pre-conditions for restoring harmony. The closer the dependence between offender and aggrieved, the more important it is to forego processes we would call asking/granting forgiveness, and the greater the need for all parties to move to reconciliation. The deep cleansing of introspection and forgiveness may not be achieved.

The world of the Bible places a premium on reconciliation. For the stability of the family and of the kingdom, David cannot afford a rupture with his son Absalom. Joseph cannot afford a rupture with his brothers if he is to serve his mission as their guardian and if they are to face the challenge as a minority culture in Egypt. Esau values his relationship with his only brother, his twin, Jacob. In none of these stories are the injuries and injustices of the past examined, aired before the aggrieved and the subject of apology. In each of these cases, the parties exist in a hierarchy whereby the offender submits to the aggrieved. Absalom, the brothers, and Jacob all bow before the party they wronged, though not necessarily with reference to the injury they caused, but because of their inferior status. And in all three cases, the party with the higher status – the aggrieved party – seeks to bring harmony to the relationship – never by demanding contrition, but simply by offering a kiss – the kiss of reconciliation, a potent, non-verbal sign: we are too important to each other to allow this continue. We are good.

The scribal tradition for the writing of a Torah scroll calls for dots to be placed atop the word “and he kissed him” (Gen 33:4) Here the rabbis of the midrash made a trenchant observation: the dots tell us that Esau indeed kissed Jacob “but not with a full heart.” There was no contrition on Jacob’s part, no apology, no clarity achieved, no assuage of Esau’s feelings. This was the kiss of reconciliation.

Introspection begets remorse. Remorse begets apology. Apology begets forgiveness. When the full cycle is closed, there is deep cleansing. There is redemption. But so often, for so many, those early stages of introspection, remorse and verbalization are too difficult to navigate. The biblical narrative gives a more clear-eyed view of imperfect people in an imperfect world. And here the takeaway is that the bonds that connect us are of paramount importance. Sometimes we need to forget about forgiveness and do things the biblical way – to kiss and make up.