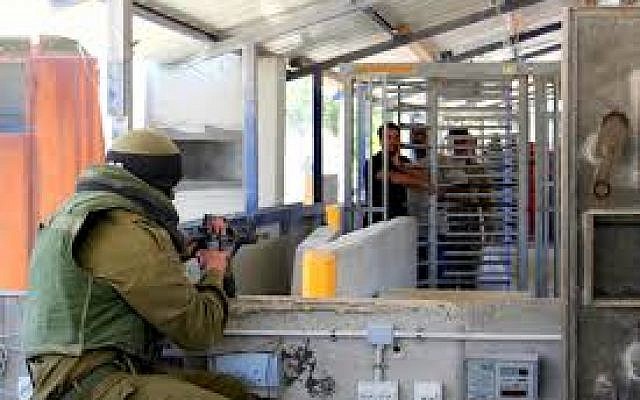 Rabbi Katz commences by depicting the humiliation experienced by an American Jewish philanthropist and by an Arab businessman from Ramallah due to tight Israeli security protocols. Rabbi Katz recognizes that these security protocols are probably necessary, but he writes that an apology is owed by the Jewish People and/or Israeli society for the unavoidable evils associated with these rough and invasive security measures.

While we have all been subjected to zealous and seemingly harsh security practices at one time or another, we are aware that such is the nature of things – there are wicked, bloodthirsty people in the world, who have caused governments to invest countless billions of dollars and ordinary citizens to lose countless billions of hours by being unduly inconvenienced, harassed and downright humiliated in the interests of safety. Intrusive and dehumanizing security protocols are sadly part of life, and I do not think that apologies are necessary. On the contrary, it is the terrorists who owe the world an apology for necessitating the enactment of these extremely imposing security measures (as well as, obviously, for the vicious acts of violence and murder that have shaken humanity to its core). Security should be as civil and sensitive as possible, and never cruel, but unfortunately, nations have been quite understandably forced into very tough positions in order to defend lives, for which apologies seem out of place and perhaps even counterproductive. One can disagree, but I think that we must be very careful before introducing apologies into the realm of security procedures.

Rabbi Katz then takes his theme of apology for necessary evils to a theological level, writing that:

Orthodoxy is by definition discriminatory. People are denied full entry based on their gender, or various other factors. I love Orthodoxy and appreciate tremendously all that it gives me, but that does not absolve me of my complicity in its exclusionary ethos. I remind my community every Yom Kippur that we need to add this to our list of al cheits. We need to plead for forgiveness for the discrimination inherent in being orthodox. Justified behavior does not necessarily diminish the criminality (albeit without malice) such behavior sometimes entails.

Halacha is not a technical, legal requirement whose ethos we are free to disavow. It is the Will of God, and we are bound to embrace it, cherish it, and fully identify with its values, even if it may at times be a challenge. As Rashi comments on this week’s Torah portion, in the name of the Sifri (Midrash):

In other words, it is not enough to physically observe the Torah; rather, a Jew must also become one with the Torah’s ethos, which reflects the Will of God. This is love of God with all of one’s heart.

Rabbi Joseph B. Soloveitchik (of RIETS/Yeshiva University) elaborated upon the concept of proudly embracing the Torah’s value system, without apology, in a famous 1975 address:

…Second, we must not yield — I mean emotionally, it is very important — we must not feel inferior, experience or develop an inferiority complex, and because of that complex yield to the charm — usually it is a transient and passing charm — of modern political and ideological sevaros (logic). I say not only not to compromise — certainly not to compromise — but even not to yield emotionally, not to feel inferior, not to experience an inferiority complex. The thought should never occur that it is important to cooperate just a little bit with the modern trend or with the secular, modern philosophy. In my opinion, Yahadus (Judaism) does not have to apologize either to the modern woman or to the modern representatives of religious subjectivism. There is no need for apology — we should have pride in our mesorah, in our heritage. And of course, certainly it goes without saying, one must not try to compromise with these cultural trends, and one must not try to gear the halachic norm to the transient ways of a neurotic society, which is what our society is.

A thought. Kabbalas Ol Malchus Shamayim (Accepting the Yoke of the Kingdom of Heaven)— which is an identical act with Talmud Torah (Torah study) — requires of us to revere and to love and to admire the words of the Chachmei Ha-Mesorah (Torah sages of the generations)…

We take pride in the Torah’s values and become one with them, never apologizing or being squeamish about what they represent.

Let us follow the ancient path of Abraham and assert traditional Judaism as the countercultural force for divine morality. Some of the values of the Torah may be unpopular through the lens of modernity, but identification with the Torah and its values has been the blessing which has kept our people and its faith alive for millennia, against all odds, and which will continue to do so for eternity.