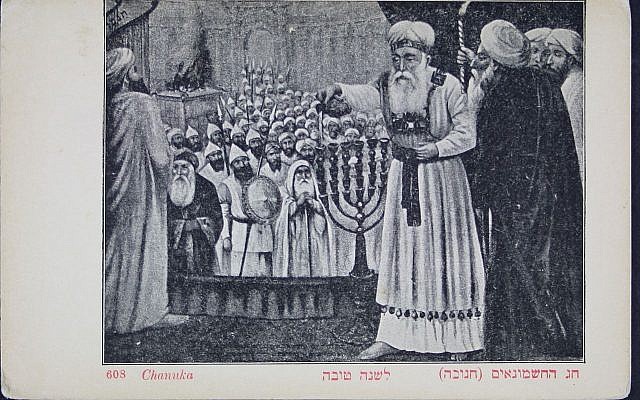 Of all Jewish holidays, Chanukah is the one that is most subject to distortion. American retailers have turned Chanukah into the “Jewish Christmas”, secular nationalists have converted Chanukah into a celebration of Jewish might, and heterodox Jews have morphed Chanukah into a day of general religious freedom and light, with a lack of clarity about what Chanukah’s light actually signifies.

The message of Chanukah has become twisted like a pretzel, and it might very well be that since the real message of Chanukah does not sit well with contemporary liberal thought, Chanukah was “reimagined” and made into something quite the opposite of what it truly is.

Realizing this inescapable fact, Michael David Lukas, in a well-publicized New York Times article entitled The Hypocrisy of Chanukah, put this into perspective:

(T)he story of Hanukkah is based on a historical conflict between the Maccabees and the Hellenized Jews, the former being religious zealots who lived in the hills of Judea and practiced an ancient form of guerrilla warfare, the latter being mostly city-dwelling assimilationists who ate pork, didn’t circumcise their male children and made the occasional sacrificial offering to pagan gods.

Some of the details are up for debate, depending on which texts you consult. But everyone agrees that the Maccabees won out in the end and imposed their version of Judaism on the formerly Hellenized Jews. So Hanukkah, in essence, commemorates the triumph of fundamentalism over cosmopolitanism. Our assimilationist answer to Christmas is really a holiday about subjugating assimilated Jews.

Chanukah (which encompasses much more than its depiction by Mr. Lukas) is the story of the triumph of Torah values and Jewish religious purity over pluralism and dilution. Anyone who reads the historical accounts and studies the Talmudic enactments and the classical rabbinic literature pertaining to the era of the Chanukah story knows that Chanukah’s message is one of safeguarding the Mesorah, the Torah Tradition, against challenges from all sides.

It is thus with puzzlement that I read Rabbi Ari Segal’s Emulating the menorah: Jewish unity through diversity, in which we are told that

It’s easy to look at Jews with different philosophies, practices, and politics and say, “They are different.” It’s convenient to dismiss alternative approaches to serving G-d as illegitimate. It’s simple to draw lines and erect mental boundaries and make our fellow Jews something strange and other from ourselves. It’s practical to view Jewish communal resources (e.g., dollars, prospective students, parishioners, etc.) as a zero-sum game. It’s satisfying to read the results of the Pew Report as a referendum on which denomination is “winning” and which is “losing…”

Embracing pluralistic unity is a fundamental struggle of our generation, and we must all work toward this together, and in a positive spirit…

So this Chanuka, let’s not be frustrated or upset by the divergence of opinion in the Jewish community. Let us embody the menorah and embrace our individuality—let us make light together, each in our own uniquely dedicated way.

This is the antithesis of what Chanukah teaches.

I, for example, don’t agree on every principle of IKAR, a progressive synagogue here in LA. But I deeply respect and value their work in bringing Jews closer to their identities with love and acceptance… Can “Centrist Modern Orthodox Jews” we see how Chovevei Torah makes Yeshiva University better by forcing them to engage as broadly as possible; how YU makes the Jewish Theological Seminary better…

Chanukah compels us to accept that Judaism is objective; it has standards, and not everything goes or is an acceptable expression of Judaism. We dare not celebrate the rejection of this paramount lesson of Chanukah.

The Torah reading for the first day of Chanukah relates how the Princes (“Nesi’im”) of the Twelve Tribes approached to offer their sacrifices for the inauguration of the Mishkan (Tabernacle). The commentators explain that Moses did not authorize these voluntary sacrifices until God advised him that they could be brought, for these sacrifices had not been prescribed by the Torah. (V. Targum Onkelos and Rashi on Numbers 7:3.)

The takeaway here is that innovative Jewish practice is not acceptable; how we observe the Torah must be from the Divine Mandate.

It is fascinating that all twelve Nesi’im brought identical offerings (as featured in the daily Torah readings of Chanukah), even though each Tribe had its own unique identity and role. Rabbi Hershel Schachter explained that the lesson is that even though each Tribe, and every group of Jews and individual Jew, may have a unique emphasis in serving God, we are all bound to the same halachic observance. (For example, Chassidim are known to pray with great exuberance, Eastern European non-Chassidic Jews are known to pray with great depth and intensity, and German Orthodox Jews are known to pray with great solemnity. But the prayer of all of these Jews adheres to the same requirements of the Shulchan Aruch/Code of Jewish Law, consisting of the same prescribed blessings and recitations; unlike contemporary non-halachic Jewish prayer, nothing has been excised, feminized or revamped.)

The Torah readings of Chanukah embody the holiday’s core message, which is decidedly not one of religious innovation or Jewish pluralism.

Let us recalibrate our approach and kindle the true light of Chanukah.