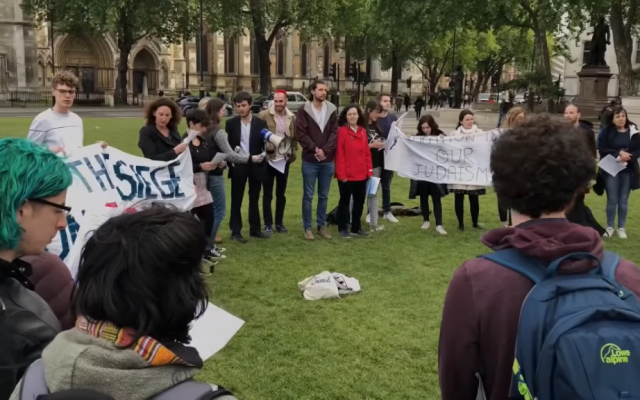 On 24 May Anna Roiser implored us to sign a petition to halt the eviction of a family from a house in the East Jerusalem neighbourhood of Silwan. She asks the JNF ‘to live up to its Torah obligation’ and writes ‘As we head into Shavuot, may we do so working to uphold Torah values in Jerusalem.’ A golden arc of porridge hit the floor when I read that. For Ms Roiser was one of the people who just over two years ago (16 May 2018) recited the Kaddish prayer for Gaza. I for one will take no moral lessons from her.

If the Israeli Court rules that the eviction is valid why is that not sufficient for Ms Roiser? I haven’t heard her objecting to the Court’s indictment of PM Netanyahu.  The Israeli judiciary is independent and often rules in favour of Palestinian claimants.

As regards the Absentee Property Law, most countries have something similar. In the UK we have the principle of bona vacantia, whereby if someone dies with no will and no blood relatives, their property reverts to the State.

As set out here, the owner of the property which Ms Roiser discusses – Musa Sumarin – died in 1983. His heirs lived in countries sworn to the destruction of Israel. By the Absentee Property Law the house was transferred to the State. In the 1990s the State gave the house to the JNF subsidiary Himnuta Ltd. In exchange land was provided in the Wadi Ara area. Upon this land was built an Arab village (a point Ms Roiser strangely omits).

A distant nephew (Muhammed) illegally took over the home after the death of the owner. He forged a document which claimed that Musa Sumarin had sold the property to his father The judge believed the document was bona fide and ruled in Muhammed’s favour.

Later, using the same forged documents, Muhammed also tried to seize property next to the house he had won in court.

The case was reopened and during the investigation it was revealed both by witnesses who came forward and by the Police Criminal Forgery Unit that the documents presented by Muhammed were fraudulent. In light of this information, Muhammed lost his case and counter-charges were filed against him which re-opened the original case. He lost the original property (because of using forged documents) and was fined 500,000 NIS. He has since refused to vacate the property.

The JNF’s subsidiary Himnuta has offered compensation to the Sumarin squatters even though this was not required by the Court.  And the Sumarin family reportedly owns a two-storey building nearby, which the family has rented out.

Israel has an independent judiciary. Those who attack its decisions notably fail to mention genuine and egregious human rights violations in China, North Korea, Iran, Russia, Bangladesh or Pakistan.

There’s a name for that.