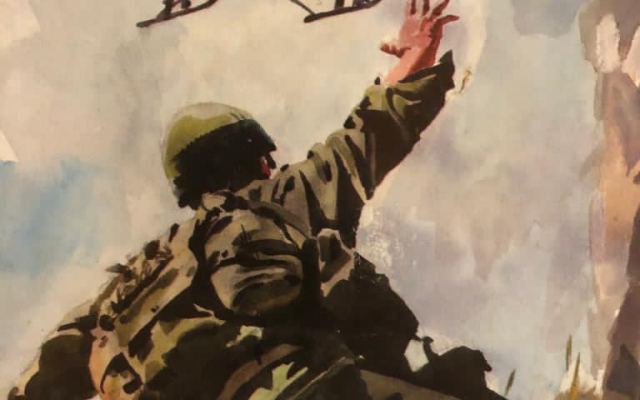 Image from front cover of ‘Three Births in September’ by Colonel Moshe Givati; published by Ministry of De

‘Valley of Tears,’ the dramatic series currently being shown on Israeli TV about events in the Golan Heights at the outbreak of the Yom Kippur war, has had me and many others spellbound each week.

Although several of my friends and acquaintances have told me that they are unable to watch it as it brings back too many painful memories, I find myself compelled to watch. I quite understand their attitude, and am almost surprised at my own ability to persist through every graphic scene. I admit that I find it difficult to sleep afterwards, but some obsessive preoccupation with the events of that traumatic time brings me back to the screen every week.

I was living in Israel at the time, and in fact had just given birth to my third child when the war broke out. My stay in the maternity ward was cut short that Shabbat which also happened to be Yom Kippur when the silence of the day of rest, prayer and contemplation was shattered by the sound of the sirens echoing through the Jerusalem air. I managed to listen to the news on my portable radio, so knew that a war had broken out. All the mothers were told to leave the hospital with their babies, and that is what most of us managed to do somehow, as Israel’s population was being mobilized to deal with the crisis.

The scene in our home was one of confusion, with our two young children eager to meet their new sibling, my husband and I trying to find the best place to put the baby’s cot and keep us all away from any falling bombs (he and I had experienced the Six Day war in Jerusalem and expected to hear planes, bombs and artillery again) and our need to try to gain what information we could from our recently-acquired television set.

Our experience of the Six Day War led us (and most other people, too, I suppose) to expect the war to be over soon, but as we all know now, that was far from the case. As the days dragged on and grim news came from the various fronts (and we at the rear were not given all the facts until much later), the idea that matters were not going well eventually sank in.

With two young children and a newborn baby to look after our attention was soon focused on getting through the day and the night. Our apartment on the top storey left us feeling exposed, but there was no shelter nearby other than our downstairs neighbour, who was away. Although the absence of bombing and artillery surprised us at first, we knew that there was heavy fighting in both the north and the south of Israel, and hoped that the border with Jordan would remain quiet.

Now, when I watch the dramatic and graphic reenactment of what went on at the time in the Golan Heights, I realise that I was completely unaware of the tragedy that was unfolding not so very far from my home. The threat to Israel’s continued existence was more real than we could imagine, and it is only because of the courage and sacrifice of our soldiers that we are still here today.

The price that was paid in life and limb was heavy beyond all imagination, and there are those among us who still today bear the mental and physical scars of that war. Since then I have translated memoirs written by senior officers who fought in the war, and they left a deep impression on me.

I have seen various criticism of the way the TV series depicts what happened then, but in my view, if it serves any purpose it is to drive home the message that no matter how bad things are here, how rotten our politicians, how decadent our society, how irrelevant our daily concerns, anything, and I mean anything, yes anything is better than war.