One might think that with all my heartfelt convictions and passionate opinions that I’d be bursting with an overflow of words between one article and the next and that I could hardly wait to pick up my ink tipped sword to fight the next holy battle. How I wish it were true. 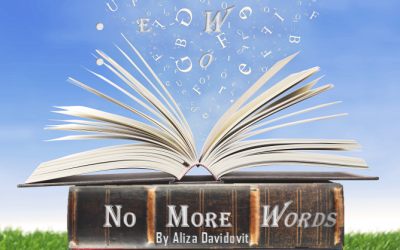 Any writer will tell you that there is no enemy more threatening to their resolve than the blank white page that stares you down like a condescending mocking adversary immobilizing your start button. We writers are fully stocked with self-doubt, confusion and distractions. But with words and inspiration, I fear the seven-year famine every time. And this time is no different except that this week I should be more ashamed than usual in the shadow of last week’s Torah reading in which Moses beseeches God to find another messenger for his divine mission because he is “not a man of words.”  But it turns out not having words, even as God’s chief spokesman, is not a disqualifier.  And so God tells Moses: “Who gave man a mouth, or who makes [one] dumb or deaf or seeing or blind? Is it not I, the Lord? So now, go! I will be with your mouth, and I will instruct you what you shall speak.” And so now I’m praying as I sit down to write, after two days of dodging impediments choreographed by Satan, that the Almighty will instruct me as well what to say, that is, if I’m meant to serve His purpose. And though I’m no Moses, I find faith in the fact that when God has a greater good in mind He even put words into the mouth of the prophet Balaam’s donkey. And so, hee-haw, here I go.

There is a belief in Judaism that each person is allotted a certain number of words in this lifetime and thus it’s incumbent upon each of us to use them wisely, keep them clean of slander, gossip and curses. “For behold, He… declares to man what his speech is.”[i] I actually got a small taste of the distaste of hearing our own words played back to us. I’m a big fan of my Amazon Echo, which more often than not serves my requests satisfactorily. I prompt it with the word, “Alexa” and then put in my command. But on those few occasions where the machine didn’t perform, I called Alexa, all in jest of course, an idiot and a moron.  How was I to know that Google fashions itself a God and records our interactions too. When I played it back, I felt ashamed. I didn’t sound like the person I view myself to be or want to be. As always, I’m grateful when God gives me a chance to see myself objectively and to do better. And then there is my mother, the strongest, kindest, classiest women I’ve ever known, who since having a stroke three years ago has adopted a vocabulary that is in serious need of censoring. And so I’m terribly pained that Wednesday she went to sleep, ever laughing but with expletives upon her tongue, and Thursday she awoke having lost her ability to speak.  She bounced back from a first such episode last week, but this time she is still mumbling her words as I’m here typing away and stammering over mine. And I can’t help but be filled with a sense of dread realizing that in life, at any moment, at any time, God can take away our ability to repent, to say I’m sorry, to change course, to change curses into blessings. How terrifying to be locked into a destiny. And just as I’m no Moses, my mother, my precious yiddisheh mameh,  is no Pharaoh. But the concept of being locked into a destiny leads me to this week’s Torah reading.

Moses proceeds to do what God has asked of him despite his initial pleas to defer the responsibility to someone else. But Moses is not successful at first and his efforts to convince Pharaoh to liberate the children of Israel fail. After each brutal plague, Pharaoh hardened his heart and refused to let them go. On each occasion Pharaoh exercises his free choice and refuses to do the right thing for his country and his people, and for himself. His ego could not submit. He fashioned himself to be a god and in posturing himself as a deity, he would not yield to the God of Moses. When the plagues were heavy upon him and his country, he was of one mindset, but when relief came, his arrogance prevailed. How often in our own lives do we acknowledge it’s time to change our behavior and turn to God for answers, to submit to His will and commandments when we are going through our own plagues of “darkness” and hardships. But when things get a bit better, we forget our moments of vulnerability, those moments when God seemed to be our only refuge and soon resume our overconfident stance that we’ve got it all under control. But God tests us again and again if we don’t pass the first few times, as He did Pharaoh.  And then something terrifying happens:The free choice is eventually taken out of our hands.God Himself hardened Pharaoh’s heart because it comes to a certain point when repenting becomes impossible. For sin begins as a guest but then proceeds as the host.  Five times the Egyptian leader spurned God and Moses even after acknowledging God and his own sins: “God warns a man once, twice, and even a third time, and he still does not repent, then does God close his heart against repentance so that He should exact vengeance from him for his sins.”[ii]

In our own lives we often behave like Pharaohs hanging on to habits, friends, behaviors, beliefs, even jobs,that we knew from the onset had the potential to ruin us. But now we refuse to set them free or lack the power to do so. Have you hardened your heart and begun to make excuses to accommodate your guilt? “I know I’m married, but the affair keeps me sane”; “I know I shouldn’t, but I’ll just do  this once or twice”; “I know it’s wrong but it feels good;” “I know it’s forbidden, but I tried my best;” “I know I shouldn’t, but I’ve done it before;” “I’m not religious; those rules don’t apply to me.” Man often starts off the master of his sin and soon finds himself its slave. It happens when we silence both our inner voice and real life advisers like did Pharaoh who did not heed the voice of his servants who said to him, “How long will this one be a stumbling block to us…Don’t you yet know that Egypt is lost?” This week’s Torah reading reminds us to take stock of our life and behaviors before we too become lost or even worse, locked into a destiny we no longer have the power to change. As the Talmud says, “A prisoner cannot release himself from prison.” So stop building your own prison bars one wrongdoing at a time.

The Israelites, too, did not heed Moses’ words. Wrapped up in their slavery, they could not fathom there was actually a way out. They showed no faith in God and had descended into such depths of impurity that they were almost not worthy of being saved at all. They became so accustomed to their servitude that most did not want to leave Egypt at all. Have we become like that too, so mired in the filth of life that we can’t even see it anymore? Have we become slaves to it?

It was almost too late for the Israelites; it was definitely too late for Pharaoh. But will it be too late for you and me? It is believed in Judaism that before the arrival of the Messiah you will not find a person who is not plagued by serious problems. So if your life is burdened now more than ever, know there is a reason for it. There is something in the air.  If you tune in, you will feel it. Are we being punished or prompted to do good or both? Probably. My Amazon echo was a subtle but poignant reminder that we what we do and say is being partially acknowledged by our lovely gadgets and devices and comprehensively by the Almighty. One day soon it will all be played back to us and there will be a price to pay.

This afternoon when I tried to get my mother to exercise her slurred speech and say, “She sells seashells by the seashore,” we broke out into laughter because that’s what we often do in this house to handle our heartaches. But then when I tried to get her to repeat Psalm 121 in Hebrew, “My help is from the Lord, the Maker of heaven and earth,” my heart cried in silence when God’s holy name was mangled upon her sweet lips.  As I write this conclusion in the deep hours of the night, I don’t know what tomorrow morning will bring.  I’ve awoken to three years of shocks and heartache with but a few sprigs of good news.  I pray with all my heart that her speech will come back. But I can’t help but learn a lesson from this episode and this week’s parashah and realize that we each must reach out to God as soon as we can and never take for granted that we can call upon His holy merciful name at a time of our own convenient choosing. For, tomorrow, we simply may not be able to or He may no longer be listening. Either way, my friends, it just turns out that way too often tomorrow is a lifetime too late.