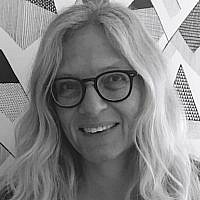 The Blogs
Lynn Schler
Apply for a Blog
Please note that the posts on The Blogs are contributed by third parties. The opinions, facts and any media content in them are presented solely by the authors, and neither The Times of Israel nor its partners assume any responsibility for them. Please contact us in case of abuse. In case of abuse,
Report this post.

In demonstrations in Khartoum against normalization of ties with Israel, Sudanese protestors held signs reading “No to Arms Deals, No to Cooperation, No to Normalization.” This slogan hearkens back to the historic “Three No’s” that have shaped Sudan’s relationship with Israel since 1967, at which time Arab leaders gathered in Khartoum and declared that “No Peace, No Recognition, and No Negotiations” would advance until Israel recognized Palestinian rights for statehood. A recent poll found that only 13% of the Sudanese population supports the normalization agreement. The current protestors are consciously linking their language of opposition to a long history of solidarity with Palestinians. Yet, the new “Three No’s” indicate that Sudanese messaging and tactics have evolved from the 1960s to reflect current times.

Israel, in what has been touted as the “Return to Africa,” is also embracing new strategies that stand in stark contrast to those employed in the continent throughout the 1960s. Observers compare the renewed commitment of Prime Minister Benjamin Netanyahu to win allies in Africa with similar efforts of Golda Meir and David Ben-Gurion. From 1958 until the severing of relations in 1973, Israel undertook a massive push to establish ties and offer assistance to newly established post-colonial nations of Africa. Historians have long debated this “Long Honeymoon” period, described by Newsweek as “one of the strangest unofficial alliances in the world.” At the honeymoon’s peak, Israel maintained 30 embassies across the continent, welcomed tens of thousands of Africans to professional training courses in Israel, and sent thousands of Israeli experts to Africa to assist local development initiatives. 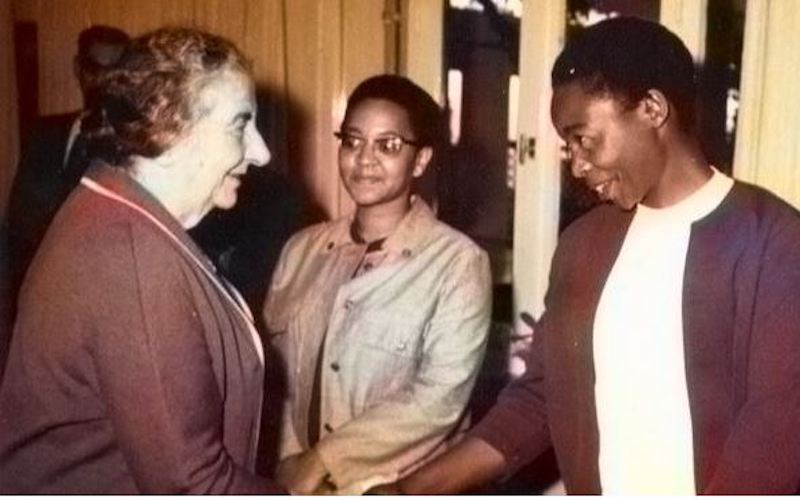 Some scholars have argued that Israel’s actions were motivated by Israeli political and technocratic elites’ ideological commitment to helping African nations face the monumental challenges of nation-building. In their public pronouncements, Israeli leaders articulated an interest in empowering newly independent nation-states. As then Foreign Minister Golda Meir wrote, “we had something we wanted to pass on to nations that were even younger and less experienced than ourselves.”

Other scholars note that these proclamations might have masked realpolitik intentions. Israel, they argue, aimed at expanding economic opportunities through the sale of aid programs and arms, and blocking international efforts to end the Israeli occupation and grant Palestinians a national homeland. Israeli relations with Africa in the 1960s were indeed a complicated mosaic of interests that defy a singular characterization. Yet even accounting for Israeli self-interests, the efforts undoubtedly included voices celebrating African popular struggles for national autonomy and supporting aspirations for post-colonial independence across the continent.

Israel’s current approach to Sudan is a stark departure from the 1960s expressions of solidarity. Instead, Israel is in lockstep with the Trump administration’s indifference to popular opinion in Sudan and the masses that led a 2019 popular revolution to oust Omar al-Bashir after three decades of authoritarian rule. Under slogans such as, “Freedom, peace, justice…the revolution is the choice of the people,” the Sudanese revolution was an uprising driven by a massive, unprecedented coalition that took to the streets with lofty aspirations and demands for democracy. Al-Bashir’s regime was toppled after months of protests, and replaced with a delicate power-sharing arrangement between the military and civilians.

The current transitional government is struggling to overcome crippling debt, food and electricity shortages, and soaring inflation; the ruling coalition desperately needs access to loans and international investments. Progress has been made impossible because of Sudan’s inclusion in the list of states sponsoring terrorism. It was al-Bashir’s regime that landed Sudan on this list, having harbored al-Qaida operatives who engineered attacks against US embassies in Kenya and Tanzania in 1998 that killed 224 people injured 5,000 injured.

To get Sudan off the list, the Trump administration offered Sudan’s transitional leaders a deal: pay $335 million to victims of the bombings, and normalize ties with Israel. This $335 million extortion attempt is earmarked to go mostly to US citizens killed in the embassy attacks, despite the fact that the vast majority of those killed were Africans. The funds will be distributed as follows: $10 million for families of US citizens killed in attacks and $3 million for those injured. Families of Kenyan nationals who died in the attacks will receive $800,000, and injured Kenyan embassy employees are to receive $400,000. This arrangement has been condemned as discriminatory by Kenyan victims. 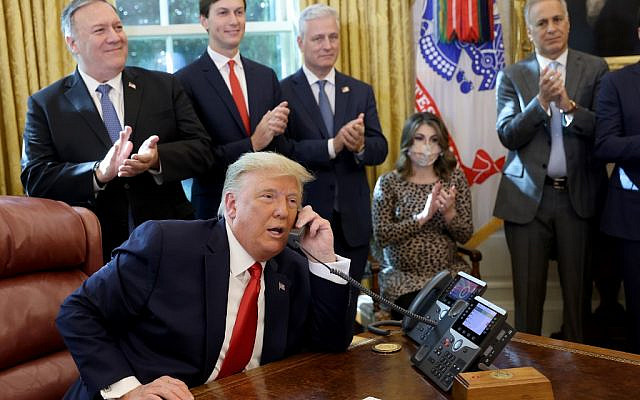 US President Donald Trump speaks with Prime Minister Benjamin Netanyahu on the phone about a Sudan-Israel peace agreement, in the Oval Office on October 23, 2020 in Washington, DC. (Win McNamee/Getty Images/AFP)

Strong-arming Sudan to recognize Israel is yet another expression of the Trump administration’s ongoing devaluation of African countries. Trump’s pressure on Sudan to normalize relations with Israel is part of last-minute re-election efforts to rally support from Evangelical Christian and Jewish voters. Leaders from across the Sudanese political spectrum have called the deal illegitimate, and a betrayal of a historical commitment to a fair and just solution for the Palestinians. And yet Israel is eagerly riding Trump’s wave, and displaying utter indifference to the backlash being generated.

Former Israeli ideological alliances with Africa have been replaced with Netanyahu’s efforts to score his own points. He faces swelling opposition in the face of corruption charges and his colossal failure responding to the coronavirus pandemic. But Netanyahu’s touting of the plan is more than a political distraction from his leadership failures. The agreement to normalize relations with Sudan, if successful, will also pave the way for the deportation of thousands of Sudanese refugees from Israel.

The Sudan deal should not be celebrated as part of some imagined “Return to Africa” by Israelis who are nostalgic for ties fostered in the 1960s. The only “Return to Africa” that truly interests the current government of Israel is that of refugees and asylum seekers.

About the Author
Lynn Schler is a Professor of African Studies at Ben-Gurion University of the Negev. She is the author of several books and articles on African history and politics.
Related Topics
Related Posts
Comments