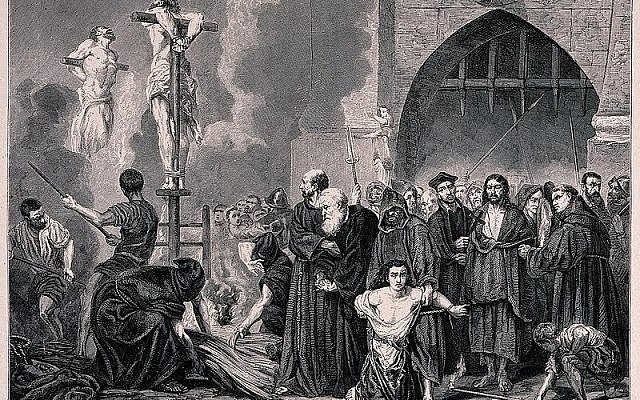 An Auto-Da-Fé of the Spanish Inquisition by Tony Robert-Fleury. 1800-1899. via Wikipedia.

I have always hated Tisha B’av. I’m a terrible faster; and since I didn’t grow up commemorating Judaism’s days of mourning, I’ve always struggled to connect to them.

I recently wrote an article about how both sides of the Jewish spectrum, liberal and traditional, should be at each other’s smachot. Someone asked me if I have any qualifiers to this policy. Would I go to a wedding on Tisha B’Av, for example? I responded that if it was a sibling’s wedding, I might go.

I now know there is no way I could ever do that.

A few months ago, former students of mine were in touch to let me know they were expecting a boy. They asked me to come to Madrid to do the Brit Milah when the baby arrived. I told them I’d be honored. As the weeks went by, I eagerly awaited an update. The call finally came a few weeks ago when I was in Berlin for a different Bris. The baby in Spain was to arrive via C-section on Friday, July 29; the Bris would be on Friday, the 8th of Av.

Due to flight scheduling, I would be unable to return to Israel before Shabbat. This meant that I’d be returning on the Sunday commemorating Tisha B’Av. I couldn’t have been more excited. This meant the fast would be significantly shorter. The day ends much later in Madrid so the last meal would end at almost 9:30 pm. In addition, the flight west and the earlier end to the day in Israel would shave off even more time. It couldn’t get any better, so I thought.

Both the Bris and Shabbat in Madrid were wonderful. The community was so welcoming, and I ate enough salty fish to last me a lifetime. I was honored to have the final meal before the fast with the gabbai of the synagogue. Afterwards we went to hear Eicha together, sitting on the floor in the dimly lit sanctuary. I wasn’t really feeling it, but I went through the motions as I always do.

When the next morning arrived to check the baby and head to the airport, something very uncharacteristic happened — my alarm didn’t go off. I woke up almost three hours late. I quickly dressed without praying the morning prayers and dashed to the family’s home in an Uber. I had only mere minutes to check the baby before heading to the airport. Thankfully, he was doing great.

I bid my friends farewell and hopped into another Uber for the airport. With no food in my stomach and not praying, I felt horribly disoriented. I almost never miss davening. But I had no time to stop. I would just have to make it up on the run.

As I arrived at the airport, my wife messaged me a brief note that changed my entire perspective on my day and Tisha B’Av as a whole. She wrote, “Do you know that, among other things, the Spanish inquisition started today?”

That’s when it hit me: I’d been missing the meaning of Tisha B’av all along. And here I was leaving Spain the same day so many of our ancestors fled and so many were unable to flee.

Moments later, I walked up to a passport window. The guard asked me, “Where are you traveling to?” “Israel” I told him. I almost started crying.

This little shift in perspective helped me understand why I would never be able to dance at a wedding on Tisha B’Av. So many fought to keep the Jewish people alive. So many strived to make it to our promised land. Yet so many were cut off in their prime and never made it. How could I turn my back on them?

Sadly, on our flight home, we were once again reminded that this battle for our existence still isn’t over. Our route to Ben Gurion airport had to be circuitous to avoid attempted rocket fire from the sudden escalation in Gaza over the weekend. These somewhat regular events in Israel teach us that this day of commemoration has yet to be nullified. I’m sure some might ask why I live in a place like this when my life is so regularly in danger. My answer is simple: Because I can.