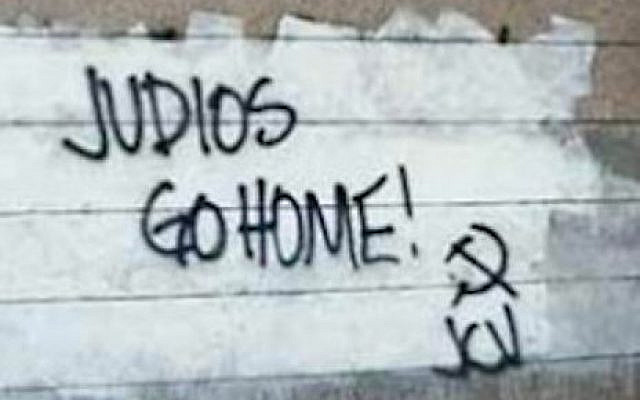 Graffiti on the wall of the Israeli Embassy in Caracas, Venezuela

My son is a paratrooper in the IDF, and nothing would make me happier than for Israel to have peace with its neighbors. This is the sentiment of every Israeli who, with rare exception, has served in the military, had a family member serve, and knows of someone who has been killed or injured in war or a terrorist attack. Sadly, if there is nothing else Jews have learned from history it is that we will not have peace unless and until the Messiah arrives.

For the short-sighted and wishful thinking, peace can magically be achieved if Israel withdraws from the West Bank tomorrow. Those who have a genuine interest in Israel’s welfare, as opposed to those who advocate withdrawal as a first step toward the Jewish state’s disappearance, ignore Palestinian history.

They don’t have to recall the Mufti of Jerusalem, a Hitler collaborator, or the genocidal threats of Azzam Pasha in 1947. During their lifetime they have witnessed the evisceration of the myths of “land for peace” following the Gaza disengagement and “settlements as an obstacle to peace” during the freeze demanded by President Obama. Their hope for peace is so strong they are prepared to disregard facts that do not comport with their utopian delusions.

Like many, I was willing to give the Oslo agreements a chance. Rabin’s desire to avoid an outcome that threatened Israel’s democracy and Jewish identity was rational. Unlike the “pro-peace” lobby which invokes his name; however, Rabin categorically rejected the establishment of a Palestinian state. I also never put my head in the sand and overlooked Palestinian incitement, irredentism and terrorism that ultimately guaranteed Oslo’s failure.

We should be grateful the anti-Semitic BDS movement makes clear, for those who have not been paying attention to what Palestinian leaders have been saying for decades, that the Palestinian goal is the destruction of Israel. As Mahmoud Abbas put it, “The ‘Jewish state.’ What is a ‘Jewish state?’…You can call yourselves whatever you want. But I will not accept it.”

Israel’s only option is suicide. This is what the demand for the return of refugees and the boycott movement are about. Just listen to the movement’s most famous advocate, Omar Barghouti, a man welcomed by universities and praised by artists, professors, students and other members of the BDS cult: “[Israel] was Palestine, and there is no reason why it should not be renamed Palestine.” Some of his acolytes claim they support a two-state solution, but they are not listening to their guru, “No Palestinian, rational Palestinian, not a sell-out Palestinian,” Barghouti said, “will ever accept a Jewish state in Palestine.”

In an age when history barely extends beyond the latest Trump tweet, it is understandable that so many Jews are uninterested in the millennia preceding the reestablishment of Israel when Jews had no peace. For centuries, Muslims at best granted Jews second-class citizenship and, at worst, persecuted and murdered them – though with less regularity than the Europeans.

Today, many Jews are so determined to prove their liberal cred, they allow the bogus “Islamophobia” lobby to silence them. They are afraid to acknowledge Muslim extremism. Hence, they can obsess over settlements and “occupation” without considering the Islamist agenda of the Palestinians – and not only members of Hamas and Islamic Jihad – which does not accept the idea of a Jewish state on “holy Muslim soil” or Jews ruling over Muslims.

If the Palestinians were transformed into Zionists, Jews would remain targets of Islamists. Iran’s mullahs and their Lebanese puppets are committed to Israel’s destruction. Many of the same Jews who refuse to acknowledge Islamic extremism champion the nuclear agreement that Iran violated from day one and ignore the genocidal threats from the mullahs in the same way Hitler’s rantings about his intention to exterminate the Jews were dismissed.

It is sickening to see anti-Semitism politicized. Both left and right pretend they are pure and insist Jew-hatred is restricted to their opponents. White supremacists and “progressive” advocates of BDS share an eliminationist agenda. Lefties in Britain are blaming Israel and the Jews for the defeat of the anti-Semitic leader of the Labor Party. In the U.S., ultraconservatives accuse Jews of being behind the impeachment of President Trump. Anti-Semitism has been normalized with the election of anti-Semites to high office who are shielded by their leaders.

To give a sense of the environment, this is a newspaper friendly transcript of a call I received, “Jews and n****ers, both you mother****ers are the same, and if my president is impeached it’s gonna be hell to pay.”

The Holocaust has become as remote to the young generation of Jews as the Peloponnesian War, but they are being exposed to anti-Semitism on a scale that we have not seen for decades. The situation outside the United States is much worse, but even here, where Jews enjoy the greatest freedom, access and success, Jews are feeling increasingly insecure. The unthinkable has happened –Jews are being murdered for being Jews.

Hostility toward Israel on campus is nothing new, but many American Jews believe the degree of anti-Semitism fueled by the BDS movement, intersectionality nonsense, academic malpractice and the tolerance of university administrators and faculty, has reached epidemic proportions.

If Israel disappeared tomorrow, anti-Semitism would remain. You can also be sure that if Israel capitulated to Palestinian demands to withdraw to the 1967 borders, accept the “right” of return and the establishment of a Palestinian state with Jerusalem as its capital, critics would focus on the “illegality,” unfairness, and continued colonization of “Palestine” within those borders. If Israelis can no longer be blamed for the plight of Palestinians, they will be accused of abusing Israeli Arabs.

Herzl was right about the irradicable nature of anti-Semitism. It is meritorious that so much money is being invested in combating this scourge, but it is a Sisyphean battle that is best fought by educating the next generation through global resources such as the Jewish Virtual Library.

After more than 2,000 years of persecution, expulsion and extermination Jews have survived and thrived and will continue to do so. Israel, for all its faults, is our homeland. It may be imperfect and generate worldwide opprobrium, but I can live with that. Anti-Semites be damned.