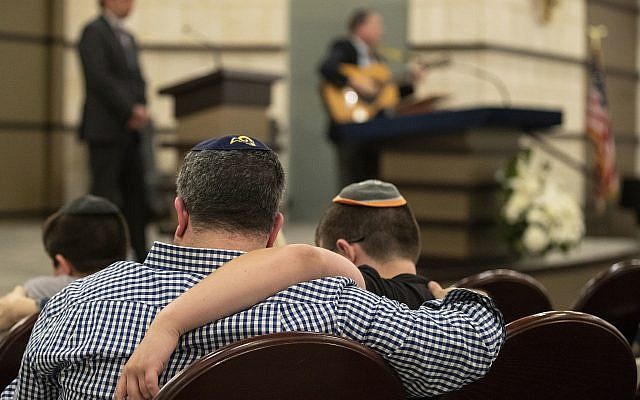 The terrible slaughter of 11 Jews at the Tree of Life synagogue in Pittsburgh is another stark and painful reminder that the world’s oldest hatred is still with us. The alleged killer was a neo-Nazi fanatic who had long vented his rage at organised Jewry and saw the good deeds of the community as a threat to ‘his own people.’

He lived in the dark shadows of the web where Jews are depicted as a devil made flesh, a corrupting, controlling influence with seemingly unlimited power to ruin Gentile lives. His twisted, conspiracy addicted mindset is one we are all too familiar with.

Sadly, the temptation from the start has been to politicise this outrage. Firstly, there was Baroness Tonge who suggested that Israel was somehow to blame for a massacre of Jews as well as other acts of antisemitism. Her appalling Facebook post, since deleted, was rightly condemned across the political spectrum.

Then there were those who stated that President Trump shared in the complicity for this crime, having created a climate of hate in the country. Still others reacted by shifting the blame game to the Democrats, with a series of irrelevant discussions about the Iran deal and Middle East politics.

Let’s be totally clear. No ‘side’ was to blame for the appalling massacre in Pittsburgh. One man and one man only was responsible and to forget this is to strip an individual of agency and free will. Arguing that Trump bears some responsibility for the shooting is dishonest, disreputable and dangerous. There is clearly no evidence that the President incited the attack. Moreover,  the alleged murderer expressed his revulsion for Trump as a man ‘possessed’ by the Jews.

Sadly, America has a history of shootings at synagogues and Jewish centres. There was no Trump around then to inspire these acts of evil. So how do we explain them? The simple answer is that antisemitism, whether from the far right, far left or Islamist circles, has a power, reach and persistence that is as fathomless as it is unfathomable. It results in atrocities and bloodshed, in savagery in deed and in thought. Antisemitism has the power to awaken the forces of the irrational and the unthinkable. It takes logic, evidence and facts and mangles them.

Of course, that hardly means that President Trump is beyond reproach. He has undoubtedly said things that have acted as a dog whistle to the far right. The invocation of ‘America first’, the attack on globalists and his comments during the Charlottesville rally have exacerbated tensions and given succour to many nationalists, antisemites among them. On the sensitive question of immigration, politicians have a duty to discuss issues with care and with a sensitivity to facts. Instead, this President has created a febrile atmosphere over the last two years, with an ill judged Muslim migration ban and disturbing comments about minorities. His endless denunciation of the Democrats is ugly, though so too is the non stop characterisation of Trump as a modern Hitler. The political atmosphere is toxic but it is surely a stretch to make the President an accomplice to murder.

Yet some people condemn the Pittsburgh massacre only because it allows them to attack a right wing President. They are silent when Jews are targeted in Europe, defamed in the UK or murdered in Israel. But if their moral antennae are alert so selectively, it shows that they are more interested in scoring political points than engaging in anti-racism.

As Jews, we cannot afford to be so selective. We know that antisemitism comes in many forms and strikes in many places. The only response to Saturday’s appalling crime is to show a united resolve in confronting its evil menace.