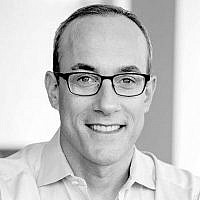 The Blogs
Dan Senor
Apply for a Blog
Please note that the posts on The Blogs are contributed by third parties. The opinions, facts and any media content in them are presented solely by the authors, and neither The Times of Israel nor its partners assume any responsibility for them. Please contact us in case of abuse. In case of abuse,
Report this post.

When I was a teenager, a ridiculous movie came out called “Bill and Ted’s Excellent Adventure.” Two goofball students from California were failing out of high school. They needed an A+ on their final history project. And so George Carlin shows up with a time machine, and Bill and Ted proceed to kidnap some of the greatest figures in history – Socrates, Joan of Arc, Beethoven, Abraham Lincoln – whom they bring back to modern-day San Dimas, CA to tell the story of Western Civilization. (Why they left out Moses, Esther, or King David is beyond me.)

Most young American Jews – fortunately – are much better students than Bill and Ted. But as I survey the scene of Jewish education in America, I wonder where the spirit of leadership will come from. There are surely bright spots in a number of Jewish day schools. But will most young American Jews – both those in full-time Jewish day schools and especially those enrolled in public and secular schools – ever really encounter the heroes of Jewish, Zionist, and American history? Are they invited to take human excellence – and Jewish excellence – seriously?

For generations, the central component of educating political and civic leaders was a classical education, which served two purposes: to attach young people to their own history, giving them a sense of responsibility for their own heritage; and to provide young people models of human achievement to learn from and emulate, as preparation for their future lives as statesmen, generals, religious leaders, or educators. Liberal education was a time machine, awakening a vivid sense of the past in preparation for the looming challenges and responsibilities of the future.

These days, education in many schools seems geared toward different ends: finding signs of oppression everywhere, debunking our heroes, and leveling the heights of human greatness. We are, too often, in the business of tearing down statues. In doing so, we are shrinking the moral and political imagination of the very young people – including young Jews – who might one day step forward to lead our nation and our community.

When Tikvah, a Jewish educational center in New York, announced a new program on “Great Speeches and Great Leaders,” I knew it answered an urgent need and genuine problem. My middle-school son has already benefited greatly from Tikvah classes, on subjects as varied as the moral meaning of sports to the spirit of modern capitalism, all considered from a distinctively Jewish angle of vision. But this new program seems even bolder and more urgent. A series of online classes for middle school and high school students this upcoming August 2021, it is literally a Jewish, Zionist, and American version of “Noam and Rachel’s excellent adventure,” with classes on everything from the David and Goliath story to Pericles’s Funeral Oration, from David Ben Gurion reading the Israeli Declaration of Independence to Sojourner Truth’s “Ain’t I a Woman?”

The focus on great speeches is especially powerful. As Tikvah’s executive director Eric Cohen explained earlier this week on Tablet’s Take One Podcast, great speeches have a double meaning in history: in key moments of crisis – think Churchill during World War II – the right words and the right leader can change the course of history, preserving the good when all seems nearly lost; and in dark moments – think Ronald Reagan after the Challenger disaster – the right words can redeem human tragedy.

The focus on great Zionist leaders is especially needed for young American Jews in an era when Israel has become a target of never-ending opprobrium. How did Jabotinsky inspire young Jews to join a Zionist youth movement decades before the new Jewish state was founded? What did Golda Meir say to American leaders in Chicago in January 1948, seeking support for the small army of brave Jews ready to sacrifice everything in the name of a new Jewish state? How did Menachem Begin commemorate the Holocaust and pay tribute to the lost world of prewar European Jews? How did Natan Sharansky, the great Zionist patriot, stand up to the Soviet Union in the name of Jewish freedom? These Zionist heroes join a gallery of giants from all times and places, from the biblical age to the American founding, all devoted to a singular purpose: showing young people what true leadership looks like.

We are spending a lot of time these days lamenting some of the worst currents in America’s educational culture, from critical race theory to intersectionality to perverse varieties of anti-Zionism, antisemitism, and anti-Americanism. It is nice, for a change, to celebrate something good in the world of Jewish and American education: Tikvah’s month of “Great Speeches and Great Leaders” serves as a model for what educating toward moral and Jewish excellence might look like. I hope our young people – and future leaders – take advantage of the opportunity.

About the Author
Dan Senor is the co-author of Start-Up Nation: The Story of Israel’s Economic Miracle. He is a board trustee of The Paul E. Singer Foundation.
Related Topics
Related Posts
Comments
Advertisement