The Blogs
Nathan G. Fishman
Apply for a Blog
Advertisement
Please note that the posts on The Blogs are contributed by third parties. The opinions, facts and any media content in them are presented solely by the authors, and neither The Times of Israel nor its partners assume any responsibility for them. Please contact us in case of abuse. In case of abuse,
Report this post.

About two moons ago, I was spending Shabbat with some friends at the Student Village of The Hebrew University of Jerusalem. After Shabbat lunch, somebody broke out a game called Secret Hitler. As a fan of games like Resistance and Drug Dealer, I found myself enjoying the game. But it wasn’t just me though. There were Jews of all types. Religious, secular, right-wing, left-wing, American, Latin American (which, for the record, is not American. Fight me), European, and I think even some Israelis. The only thing that united us that day was a Shabbat meal and our enjoyment of Secret Hitler. And it was not the first time I heard of that game. I almost purchased it when making board game selections for Shabbat. Little did I know, every person in that room, and indeed all the people I spend time with on Shabbat, are secretly antisemitic.

Enter Rudy Rochman, darling of the Hasbara industry. He posted this nugget of wisdom on his Facebook page, which I sometimes wonder why I follow. 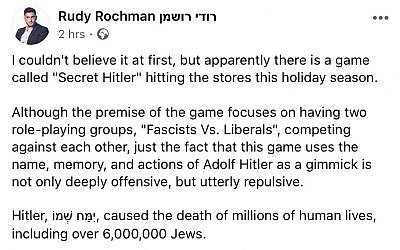 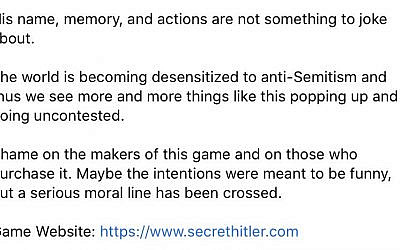 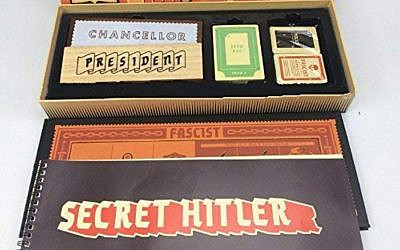 I mean, thank you Rudy. After all, without you, who would tell all the Jews I hang out with that they are unwittingly funding antisemitism? Because we are self-hating Jews, I guess. Thank you for deciding for all of us what is really antisemitic. I mean, the game is predicated on the fact that Hitler is the bad guy, and the very idea that Hitler’s name is synonymous with pure evil would bother Hitler more than any quivering scared Jews can do when they have too much time on their hands, but I must have missed the memo which says Jews must go into a catatonic shock every time somebody doesn’t spit on some German every time Hitler’s name is brought up. If my descendants are still afraid of Hitler, that means he isn’t dead enough. By Rochman’s logic, Hamantaschen are disrespectful to the memory of the Jews that were almost annihilated by Haman in ancient Persia. After all, why use Haman’s name and hat as a gimmick for your cookies?

This isn’t the only example of the Jewish outrage mob. Felix Kjellberg, AKA PewDiePie, recently got on the bad side of the Jewish establishment (again) by saying he would donate to the ADL, and then deciding against it. Whether it was because of (rightful) backlash from fans or for the memes, the fact is that I was very happy when the ADL didn’t get a dime from the successful Swede. And why should they? They accused him of being a Nazi and cost him a lucrative job working for Disney. I would argue that he benefited from it, but the point still stands. Jews getting offended by off color jokes is not a new phenomenon. As far as I’m concerned, the ADL needs to promptly apologize to the Pewds and then promptly go away. They don’t represent me. From the Council of Jews named Nathan Fishman, my deepest apologies, Felix. Please don’t lump me in with the contemptible ADL.

Meanwhile, Ben Shapiro deals with antisemitic abuse from the Groypers, led by Nick Fuentes, and nobody in the professional Jewish grievance industry gives a damn. I don’t think many Jews even know who Fuentes is. But he leads a movement of antisemitic “America Firsters” who, among other things, deny that six million Jews were murdered in the Holocaust. He compared Jews to cookies in an oven, and now being a cookie salesman means you’ve been “black-pilled” on the Holocaust. And I would argue that he is much more relevant than any of the Democrats currently in Congress. But Rudy Rochman is busy fighting the tyranny of board games. If Rudy Rochman was actually fighting antisemitism, he would be addressing the “grievances” of the Groyper community. But he goes after a board game, a fruit so low-hanging it is full of dirt. Yay Rudy, good job.

But it goes deeper than that. Has Rudy never heard of picking and choosing battles? Because I have. Sometimes, it is better to hold your tongue, because the damage done by opening your mouth is worse than the damage done by being silent.

Jews, and now non-Jews, are constantly comparing things they don’t like to Hitler. And as we slowly move further and further away from the Holocaust, the idea that you can shut down speech by simply calling your opponent a Nazi is dying a very swift death.

You may think that being offended all the time is the new black, but the election of Trump, Brexit, and the rise of anti-PC internet culture should tell you that being offended as a way of life is on its way out. Any good that comes out of socially acceptable speech and offense-taking will be gone with the bad, because when culture self corrects, it is never subtle. The baby is too dirty to save, and we will throw it out with the bathwater. What will we use to shame genuine antisemites (and genuine racists, and others with horrendous opinions for that matter) when that happens? I shudder at the thought. But Rochman will find out the hard way what happens when the charge of antisemitism is thrown around like free stuff at an Oprah show.

As the memory of the Holocaust fades into the annals of the past, I would like it for everyone to remember Hitler as a bad guy. Games like Secret Hitler facilitate that. In that game, the fascists are the bad guys. They are represented by a skull and crossbones. Hitler is very clearly the bad guy. You having a temper tantrum about an innocuous game makes people think “Hitler did nothing wrong”. Which yes, there are people who say that. Is Rochman going to go after Star Wars, whose Imperial Stormtroopers are clearly inspired from the Nazi ones? And what about all the really popular animes, which about half of them reference Nazi Germany? And nobody tell Rochman about the Call of Duty franchise, lest he have a heart attack.

Yeah, it’s true. The Nazis are still the boogeymen of the world. Mainstream culture, as well as many more obscure communities can agree that the Nazis are the bad guys. Secret Hitler is another example of this obsession with the Nazis as the bad guys. Our politics isn’t about whether Nazis are good or bad; it is about who is a Nazi. And you know what? If the Americans want to make a board game about stopping Hitler, then gesundeheit. They actually did stop Hitler, after all. We made a gambling game disparaging the Greeks. They can have fun at Germany’s expense.

I’m going to tell you a secret Rudy, and everyone else can listen in as well; being offended all the time endears you to literally nobody. If people know that nobody is safe from the wrath of self-righteous Jewish outrage, they become less likely to do business with us, associate with us, or stand up for us. After all, Trump has been the most pro-Israel president in US history, and people with names like Nadler, Schiff, and Feldman are trying to get him impeached, unfairly I might add. If I was a non-Jew, and I saw secular Jews trying to impeach Trump, and the Israelis from the Brit Hazon movement not giving Trump so much as a thank you when he throws them a bone, I would probably have nothing nice to say about Jews either. Thank Hashem, I know that there are Jews who see through this, and I hope more of them see it the way I do. Why are Jews offended? Because he said he doesn’t need our money? Newsflash: he doesn’t. Being offended about that doesn’t change that fact.

I’m not writing this to get any brownie points with anybody. I will always call out genuine antisemitism when it is appropriate to do so. After all, with Rudy Rochman trying to be a wokescold, somebody needs to fight actual antisemitism. I’m writing this because I want history to know that I stood against this. Yes, I can’t control who speaks for me, so I’m going to speak for myself. No, this type of behavior is not acceptable. Not from Rudy Rochman, not from the ADL, and not from any other outrage mobs that presume to speak for me as a Jew. I will call these people out, even if I stand alone. That is the right thing to do. It’s this little thing I call Jewish values. Standing up for the righteous, for just reasons. I will pursue justice, even if I have to do it alone. Smearing innocents as antisemites because you are offended is the most egregious crime a Jew can commit, not just against the victim, but against the Jews whose actual struggles with Jew-hatred gets taken less seriously as a result. You owe this company an apology, Rudy. And then you owe us one too.

To anyone who presumes to speak for me on what offends me, I have only two words for you, and they are not “Happy Birthday”. And if you try to shame me for buying Secret Hitler, I will buy it twice, purely out of spite. Never has capitalism been so petty.

Now, if you’ll excuse me, I have a certain Nazi board game to buy. You can buy it at www.secrethitler.com. Merry Christmas and Season’s Greetings, especially to any Jews who will be offended by that.

About the Author
Born in New York, raised in New Jersey, and operating out of a rickety apartment in Jerusalem, Nate Fishman left his parents' house while he still knew everything. Support his misadventures by reading his blog. Or don't.
Comments